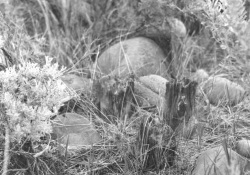 Fort Robidoux, a fur trading post also known as Fort Uintah and Fort Winty, was located at the junction of the Uintah and Whiterocks rivers in the Uinta Basin of northeastern Utah. It was founded in 1832 after Antoine Robidoux bought out the Reed Trading Post that had been in operation at that site since 1828. Robidoux had traded for beaver pelts in the Uinta Basin region as early as 1824. By 1828 he had established his first trading post in the intermountain corridor of the western slopes of the Rocky Mountains on the Gunnision River near present-day Delta, Colorado. Robidoux took out Mexican citizenship and married Carmel Benevedes, the adopted daughter of the governor of New Mexico, that same year. This enabled him to obtain a Mexican trading and trapping license.

With Robidoux’s focus on the Colorado fort, William Reed, his twelve-year-old nephew James Reed, and Denis Julien traveled to the Uinta Basin and established the Reed Trading Post, making this the first permanent non-Indian residence and business in the state of Utah. Once his operations were well established on the Gunnison River, Robidoux purchased both the site and business from William Reed and expanded their operation by building a larger fort and bringing in trappers to trap the beaver-rich streams of the Green and Uintah rivers.

By shifty maneuvering and grim determination, Robidoux kept the upper hand in the Uinta Basin region’s fur trade against competition from Fort Davy Crockett, located in Brown’s Hole on the Green River, as well as from the American Fur Company, the Hudson’s Bay Company, and traders out of Bent’s Fort. Robidoux’s business practices at Fort Uintah included trapping and trading for furs from the Indians and from free trappers, horse trading, and the illegal practice of trading both guns and liquor to the Indians. There is some evidence that Robidoux was also involved in the Indian slave trade.

During his years in business such notables as Kit Carson, Miles Goodyear, Marcus Whitman, Joe Meeks, Captain John C. Fremont, August Archambeaux, Rufus Sage, and the Reverend Joseph Williams all visited Fort Uintah. As the beaver trade declined in the late 1830s and early 1840s, so too did Robidoux’s business. In August 1844 the Ute Indians attacked and burned both Fort Uintah and the Gunnison fort. Causes for the attack could have included Robidoux’s cheating of the Indians, involvement with the capture of Indian women and children for prostitution and slavery, and sales of guns and alcohol to the Utes. The attack and burning of Robidoux’s forts were the only successful attack by Indians of a trading post in fur trade history.