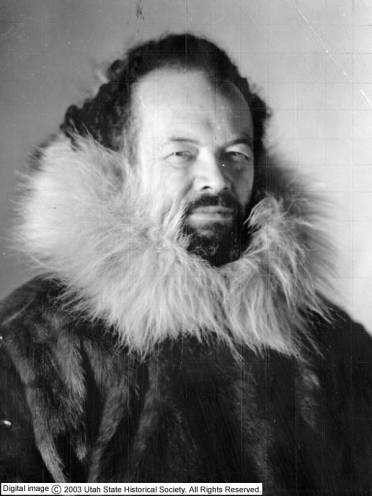 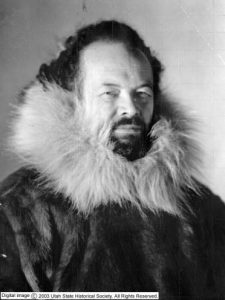 Russell G. Frazier claimed that he was predestined both by ancestry and early upbringing for the adventuresome career be enjoyed as a mining camp physician, river runner, and Antarctic explorer. One of his ancestors, he said, was John Paul Jones, and another was one of George Washington’s officers who became an aide-de-camp to Lafayette.

Born on July 5, 1893, at Fraziers Bottom, West Virginia, to John Robert and Lelia George Frazier, the explorer later recalled that his mother had to hire a cousin to watch him and keep him out of the river. His earliest reading included the stories of such seagoing adventurers as Robinson Crusoe.

After graduation from Morris Harvey College in Charleston, West Virginia, Frazier went on to receive his medical degree from the University of Louisville School of Medicine in 1919. On July 28 of that year he married Irene Johnson, a Canadian. [p.14] They became the parents of a son, Russell, and two daughters, Jeanne, and Mary Frances.

Frazier’s instinct for adventure was aroused by an offer he received to become a physician for the Utah Copper Company in Bingham. Leaving his wife behind temporarily, he made the trip to Utah on borrowed money and reported for work with a mere three dollars in his pocket. It proved to be just the kind of employment that he wanted. “I was busy twenty-four hours a day,” he wrote later; “There was nothing I did not have to do, four babies a night, fractures of all descriptions, gunshot wounds, stabbings, you name it, I did it, and loved every bit of it.”

Although Frazier remained a doctor in Bingham until his retirement, he became so enamored of the scenic backcountry in Utah that he accepted two associates into his practice to allow himself more time for exploration. Soon he discovered the thrill of running western rivers such as the Middle Fork of the Salmon in Idaho, the Yampa, and the Colorado. His river trips led to other historical explorations, including the search for the stone steps that revealed that the Dominquez-Escalante party of 1776 actually crossed the Colorado River at Padre Creek, not at the Crossing of the Fathers.

Frazier’s greatest achievement as an explorer, though, came during 1939-41 when he participated as the physician for Admiral Richard E. Byrd’s third Antarctic expedition, for which he received a Congressional Medal in 1947. Frazier was selected for the post from 1,100 applicants. [p.15] On leaving Salt Lake City for Boston in September 1939, he said, “It may be a trifle lonely before the two years are up, but right now it is stirring to think about. At least I’ll have plenty to tell my fellow Utahns when I return.” This expedition proved to be the most scientifically productive of Byrd’s Antarctic visits, with much data collected on meteorology, geophysics, geology, biology, and physiology.

Frazier, who carried the Utah state flag as well as a Brigham Young 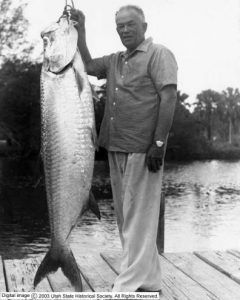 At winter home in Florida, after retirement.

University banner with him to Antarctica, conducted significant research on the physiological effects of exposure to extreme cold over long periods of time. Some of this information was used to help U.S. troops during the Korean War. One of the most common early health problems Frazier encountered on the expedition was the loss of dental fillings. The metal contracted in the Antarctic cold and the fillings just fell out. He extracted some 50 teeth, including one of his own, before he discovered that a plastic substance used by the expedition’s mapmakers could be used as a substitute filling. Besides providing health care, Frazier drove a dog sled team for three months for the expedition geologists when the regular driver suffered frostbitten feet.

A member of the New York Explorers Club and a fellow of the Royal Geographical Society in London, Frazier lectured widely on his adventures. After retirement from medical practice in 1951 he lived in Salt Lake City and spent much of his time writing and compiling narratives and records of his expeditions. Cancer claimed his life on January 14, 1968.