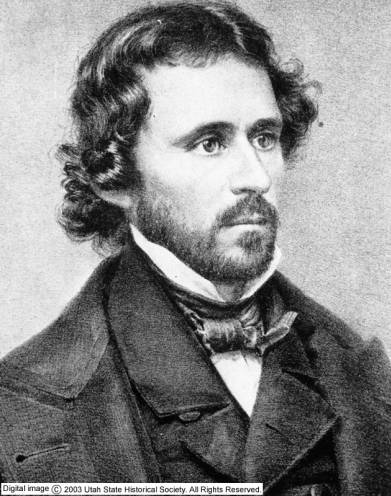 John C. Fremont was born in Savannah, Georgia, in 1813, the son of Charles Fremont, a French emigre, and Ann Beverly Whiting of Virginia. Fremont spent his boyhood in Charleston and was educated in the Scientific Department of the College of Charleston before his expulsion in 1831, three months short of graduation.

In 1833 Fremont obtained a civilian post as teacher of mathematics to midshipmen; 1836-37 found him assisting in the surveys of the projected Charleston and Cincinnati Railroad and in the Cherokee country; and in 1838 he was commissioned a second lieutenant in the United States Corps of Topographical Engineers and assigned to accompany the French scientist Joseph N. Nicollet on a two-year reconnaissance of the Minnesota country. Under Nicollet’s tutelage, Fremont quickly absorbed a great deal of information about science and sophisticated methods of geodetic surveying as well as about how to organize and manage an expedition. When the two returned to Washington to work on the report and map of the survey, he met Jessie, the talented daughter of Senator Thomas Hart Benton, with whom he eloped in October 1841. The alliance was to prove extremely valuable to the advancement of his career in exploration and politics.

During the next twelve years, Fremont led five expeditions into the West. On the first, he surveyed the Platte “up to the head of the Sweetwater;” on the second, of fourteen months duration, he made a circuit of the entire West, launching his India-rubber boat on the Great Salt Lake on the outbound trip and examining Utah Lake on the return. The third expedition took him across the Salt Lake Desert and also involved him in the struggle to wrest California from Mexico and eventually in a court-martial trial which ended his government-sponsored explorations. The fourth, a winter expedition designed to ascertain the feasibility of a central railroad route, became stranded in the snows of the rugged San Juan Mountains of Colorado. The fifth and final expedition, which also had a railroad objective, was saved from disaster by the Mormons of Parowan.

For a time, Fremont made his home in California, but he was unable to exploit successfully the rich gold-bearing veins on his large estate of Las Mariposas. California became a state in 1850, and he served briefly as one of its United States senators. In 1856 he was the Republican Party’s first candidate for president, but lost to Democrat James Buchanan. Early in the Civil War, President Abraham Lincoln gave him command of the Union Army’s Western Department, only to remove him one hundred days later when Fremont foolishly ordered property held by Missouri rebels confiscated and their slaves freed.

Fremont would serve as governor of Arizona Territory from 1878 to 1881, but most of his post-Civil War career was consumed by speculative activities in western mines, land, and railroads. He died in virtual poverty in New York City on 13 July 1890.

Fremont’s grandest achievement was in exploring the West and making it known through his lively, readable reports (prepared with the help of his wife) and his maps (drawn with the assistance of Charles Preuss). They seem to have been influential in the Mormons’ decision to settle in the Salt Lake Valley. He also discovered and named the Great Basin as a geologic and geographic entity and established the correct elevation of the Great Salt Lake at 4,200 feet.