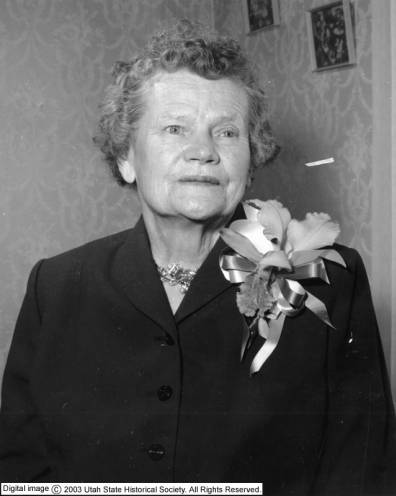 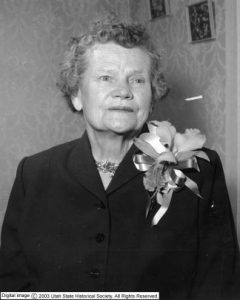 Lavina Christensen Fugal was named America’s Mother of the Year in 1955.

Born September 9, 1879, in Pleasant Grove, Utah County, to Danish immigrants Anna Katrina Jensen and Jens Christensen, Lavina attended local schools and helped with farm chores. She graduated from Brigham Young Academy but turned down a scholarship to the University of Utah because she did not have appropriate clothing. Nevertheless she obtained a teaching certificate and taught in Pleasant Grove and Midway, using part of her salary to support her future husband, Jens Peter Fugal, on an LDS church mission. They married in 1900 and reared eight children: Vida, Alda, Genevieve, Anna, Delbert, Roy, Jean, and John. Her husband died in 1945.

Called “Aunt Lavina” by many Pleasant Grove residents who enjoyed her hospitality and admired her ability to accomplish difficult tasks, she served her community and the state in many ways while overcoming personal hardship and illness. Typical of her energy and resourcefulness, at age 73 and on crutches she still managed to repair the roof of her home and paint it.

She loved beautiful but hard-to-grow dahlias and began cultivating them, first as a hobby and then as a source of income to help her family. Her efforts won wide recognition, but, she told reporter Robert C. Blair, “it’s a hard way to make pin money….One season I had to dig 700 holes, each 18 inches deep. [From]…some of those holes I had to haul away a wheelbarrow full of rocks to get things just right.

In addition to rearing her large family “In reverence for God and in an atmosphere of love, sympathy and understanding,” Fugal served in the auxiliary organizations of the LDS church and in a number of civic capacities. She was especially active in the Farm Bureau, serving as a local president, a county director, and chair of the beautification committee of the Utah State Farm Bureau. The state organization gave her its Distinguished Service Award in 1939. She chaired several Red Cross drives and the state beautification committee during Utah’s pioneer centennial in 1947. She also served as a member of the Utah County Planning Board and chair of the Pleasant Grove Board of Health.

In 1955 she was named Utah’s Mother of the Year and then won the national honor. She traveled to New York City and Washington, D.C., to receive her award and meet President Eisenhower. “This is the only place where a hungry, barefoot girl could grow up to have plenty, then fly through the clouds and land in the Waldorf-Astoria,” Fugal said.

At funeral services following her death on June 1, 1969, a neighbor, Merrill N. Warnick, remarked: ”Not many women have lived as full a life as Mrs. Fugal. One of her greatest characteristics was appreciation; another was humility. Her mind always was occupied with something worthwhile.”