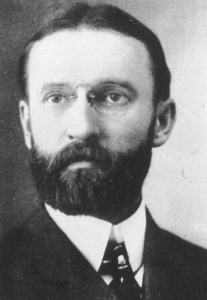 On September 5, 1922, the United States Supreme Court’s only Utahn to date was appointed and confirmed without discussion. George Sutherland was born of British parents in Buckinghamshire, England, on March 25, 1862. That same year, his father joined the Mormon church, and soon the family immigrated to Utah Territory, settling in Springville. Before long, however, the elder Sutherland renounced his new faith, and young George was raised as a non-Mormon. The family left Utah for several years but eventually returned to take up permanent residence.

The need to earn his own support forced George from school at age twelve. He found work as a clerk in a clothing store in Salt Lake City. A few odd jobs later, in 1879, he was able to return to the classroom. He enrolled in the newly established Brigham Young Academy in Provo. There he came under the influence of Karl G. Maeser, the academy’s president, whom Sutherland always acknowledged as having had a decisive effect on his life.

Sutherland’s experience at the academy was followed by a brief period of intensive study at the University of Michigan Law School. In March 1883 he was licensed to practice law in Michigan, but a Provo classmate, Rosamond Lee, attracted him back to Utah and they were soon married. Sutherland then went into partnership with his father, opening Sutherland and Son law practice in Provo. As a young attorney George defended many persons indicted under federal anti-polygamy laws and earned the respect of his Mormon neighbors.

Politically, however, Sutherland joined Utah’s Liberal party and campaigned for the end of polygamy. He ran as the Liberal candidate for mayor of Provo in 1890 but was soundly defeated. Following Wilford Woodruff’s 1890 Manifesto ending the Mormon church’s open support of polygamy, Sutherland felt that the Liberal party had lost its usefulness. He promptly declared himself a Republican and was influential in organizing the GOP in Utah. His political career blossomed. In 1900 he was elected to a term as Utah’s congressman, and in 1905 he returned to Washington as a U. S. senator. He won reelection to the Senate in 1911.

In 1917 William H. King defeated Sutherland in his bid for a third-term in the Senate, but Sutherland remained in Washington, D. C., where he opened a law office. Elected president of the American Bar Association in the fall of 1916, he led the ABA’s support for the war effort and also continued his forthright defense of individual rights.

His service in Washington brought him into contact with influential politicians, including Warren G. Harding who, upon becoming president, chose Sutherland to fill a vacancy on the Supreme Court. During Sutherland’s sixteen years as a justice he remained faithful to his beliefs in individual rights and freedom from government control. Particularly challenging to those beliefs was Franklin D. Roosevelt’s barrage of New Deal legislation. Sutherland became one of the “nine old men of the court” who complicated the course of the New Deal and led to Roosevelt’s failed court-packing scheme.

Sutherland announced his retirement in 1938 and died four years later on July 18, 1942. One year prior to his death, his alma mater, Brigham Young University, awarded him an honorary degree. At the ceremony Sutherland offered these words of wisdom that his life personified: “Character to be good must be . . . so firmly fixed in the conscience, and indeed in the body itself, as to insure unhesitating rejection of an impulse to do wrong.”