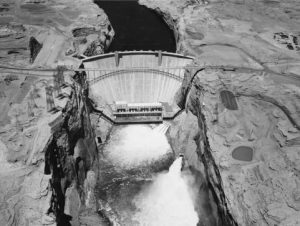 Perhaps the most important public dialogue that portended great changes for Kane County at mid-century was the debate concerning the construction of Glen Canyon Dam. A joint meeting of the Colorado River Basin states committee and the Upper Colorado River Commission called for a billion dollar upper basin states’ storage program with the Bureau of Reclamation. The ambitious storage plan called for the construction of nine reservoirs on the Colorado River and its main tributaries, to result in some 48 million acre-feet of water storage capacity. It was anticipated that the economic benefits to Kane County would be great. Opposition to the plans would also surface, beginning a debate over the environment and land uses that has continued to the present day. 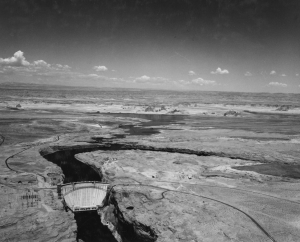 The passage of the Upper Colorado River Storage Project Bill by the U.S. House of Representatives in 1956 initiated one of the largest reclamation projects in the history of the United States. The total cost of the project was estimated at $756 million, a major portion of which would be spent on the construction of Glen Canyon Dam southeast of Kanab near Page, Arizona. The resulting reservoir, later named Lake Powell for early Colorado River explorer John Wesley Powell, would cover eastern Kane County (the border of which was the center of the Colorado River channel) as it filled Glen Canyon, greatly impacting the area physically and in terms of its use by recreationists.

Utah’s leaders of government praised the move—Senator Wallace F. Bennett, no doubt speaking of the construction phase of the dam, said that “the passage of the bill would mean more urgent industry for this area than can now be comprehended.” Utah Governor J. Bracken Lee said, “It is just the beginning of a long range program that will build up the west.” After the passage of the bill, discussion centered on access in and out of the area. The Southern Utah News asserted, “It has been determined that the best route for an access road to the Glen Canyon damsite would be from Kanab, a distance of some 70 miles. There have been rumors, however, to the effect that the roads would go through Garfield County by way of Cannonville and leave Kanab out. This will be discussed Tuesday by the Kanab City Council and possibly a delegation will be sent to Salt Lake City to look into this and do all they can to help get the roads built from Kanab.”

The effort was reminiscent of earlier battles over the location of county seats or railroad hubs. Other counties vied for the route to the dam site, realizing its importance to their economies. Groups out of Panguitch, Richfield, and other towns feeding off tourist visits to Bryce Canyon supported the construction of roads through their areas instead of through Kanab. Kane County officials understood the significant revenue that could be generated by travelers through the area on their way to Lake Powell if the road was built from Kanab; which it subsequently was.

The Kanab newspaper kept area residents informed about developments regarding the dam project. In a meeting held in Phoenix in April 1956, Arizona highway officials, Arizona governor Ernest McFarland, and Wilbur A. Dexheimer of the Bureau of Reclamation met to discuss the location of townsites and roads for the $420 million project. According to the Southern Utah News, Dexheimer was reluctant to make any commitment, “and in a very blunt manner, in the project matter Mr. Dexheimer went on to say, ‘I would like to first learn to what extent the two states, Arizona and Utah, will aid in building access roads to the construction site.'” By May 1956 the Bureau of Reclamation opened up competition for bids for the rental of heavy road-making equipment for “roughing in a road to the Glen Canyon Damsite.” In June, it opened bids for three other contracts associated with the dam construction: an access road from Bitter Springs on U.S. Highway 89 north of Flagstaff to the dam site; a bridge across the Colorado River three miles downstream from the dam site; and the excavation of a diversion tunnel on the Utah side of the river. Each successive project brought revenue into the general area.

The Bureau of Reclamation arranged to use the north part of Kanab High School for offices and drafting rooms where fifty men would work on projects related to the dam. Increased signs of activity were in evidence in the Kanab area. The county commission anticipated a building boom in relationship to the project. It initially would be related to the construction workers, but eventually tourist trade and other movement through the area would be a source of much-needed revenue. Access roads to the dam were the first construction projects to employ local men and provide better communication and transportation between Arizona and southern Utah’s remote areas. The Southern Utah News detailed each step in the development process with enthusiasm and acclaim for the potential benefits the dam would bring to the area. Each new portion of road, tunnel, or bridge that was built employed locals and brought federal dollars into the economy as it improved the infrastructure of the area.

President Dwight D. Eisenhower began official construction of the dam on 15 October 1956 by remote control from the White House in Washington, D.C., when he set off the first blast, which dislodged a huge slab of rock above the location selected for the upper portal of the right diversion tunnel. From that point on, the building site and surrounding area were the scenes of complex activity. 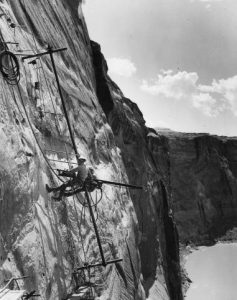 Workers on the walls at the Glen Canyon damsite ca. 1959

A townsite soon developed close to the dam site. Glen Canyon City was located in Kane County and largely developed to facilitate the smooth operation of the project, provide housing for workers, and begin an initial permanent base for recreational uses of the area. The BLM saw it as a headquarters for government activities and construction. It was estimated initially that the population of the town could reach as high as 10,000 during the construction phase of the project, but that it would likely eventually stabilize at about 4,000 persons. The permanent population would include personnel operating and maintaining the dam, providing recreational and tourist services, and operating other service businesses. The townsite was located at about 4,200 feet and had temperatures that ranged from a low of two degrees to highs of 114 degrees Fahrenheit, with low humidity.

The state of Utah sold land west of the dam site in June 1957 at public auction at bids ranging from ten dollars to $380 an acre. Much of the land was located on the highway being built from Kanab to the dam site. The sale met with concern on the part of some local cattlemen who feared that unrestricted building would interfere with cattle grazing.

The first town meeting at Glen Canyon City was held at the Rusmar Boardinghouse in June 1958 to organize a fire department, appoint a temporary town manager, and discuss options for education of the children in town. Twenty-eight residents took part in the discussion; at the time, there were thirty families in town, with about twenty-six children. The residents also considered ways of providing medical care, mail service, communication by phone or radio, and maintenance of roads. Eventually, Glen Canyon City students would be bused to schools in Page, Arizona, or Kanab until local schools were built.

The highway from Kanab to Glen Canyon opened in 1958 with a dedicatory speech given by Governor George D. Clyde, who said in part, “This is a true milestone in the history and development of Kane County, of this whole vast and spectacular region, of all Utah, and of the entire West!” The hard-surfaced, all-weather highway was constructed for $5,767,000 by five different contractors. It was fifty-seven miles long, thirty-six feet wide, and included six bridges along its course.

The Glen Canyon Bridge provided access to both sides of the river for construction needs and was built by the Kiewit-Judson Pacific Murphy Company, which placed the first steel for the arch span on 7 May 1958 and the last on 6 August 1958. The bridge is 1,271 feet long and rises some 700 feet above the river. It was the world’s highest steel arch bridge and was dedicated on 20 February 1959.

The contract for Glen Canyon Dam was the largest single construction contract in the history of the Bureau of Reclamation. As designed, Glen Canyon Dam would be the third highest dam in the world, 700 feet above the lowest bedrock (Hoover Dam was 726 feet high and Mauvoisin Dam in Switzerland was 780 feet in height). The dam would contain approximately 4,770,000 cubic yards of concrete in the dam itself and 5,200,000 cubic yards in the dam appurtenance structure. The 900,000-kilowatt power plant installed at the dam would be the seventh largest in the world. The first electricity actually generated by the plant was transmitted to Shiprock, New Mexico, in September 1964.

Merritt-Chapman & Scott Corporation was awarded the building contract and anticipated completing the project in eight years. Concrete for the dam itself was first poured in June 1960 after a dedication ceremony. The left diversion tunnel, which provided for the flow of the Colorado River during construction, was closed in March 1963 and initiated storage of water in Lake Powell. This event began the boating and other recreational use of the manmade lake while ending river running and other uses of Glen Canyon, much to the sorrow of many lovers of the natural landscape. It was estimated that Lake Powell eventually would be more than 150 miles long and reach a point near Hite, Utah, for a total area of sixty-five square miles.

The National Park Service built numerous recreational amenities along the shores of the lake in Utah; one was near Hite and another was at Hall’s Crossing. A marina at Bullfrog Basin was built in the northeast corner of Kane County, although access was from Garfield County to the north. Wahweap Marina, just across the line in Arizona, included a swimming beach and fuel dock operated by Canyon Tours, an Arizona firm. In addition, the National Park Service invested $2 million in recreation sites at Wahweap, including a sixteen-unit campground.

Glen Canyon Dam was officially dedicated on 22 September 1966 by First Lady Ladybird Johnson after ten years of planning, designing, and construction. The Southern Utah News reported, “Today, the canyon lies serenely and comparatively silent except for the hum of the huge hydro-electric generators and the sound of thousands of people who come to see this newest of Reclamation dams on the Colorado River and its sparkling clear sky-blue reservoir, Lake Powell.” Congress approved the Glen Canyon National Recreation Area Bill in October 1972, providing funds for other area improvements. The Glen Canyon National Recreation area included Lake Powell and about 1.2 million acres surrounding it in northern Arizona and Kane, Garfield, Wayne, and San Juan Counties in Utah.

Not all were pleased with the new developments, however. Particularly outside of southern Utah, and even of the state itself, a growing chorus of voices began to call for greater protection of the remaining wild and undeveloped lands of the West. A growing conservation movement began to seek increased management of the nation’s public lands. The loss of Glen Canyon to the dam and reservoir became a rallying point for environmental activists in years to come.