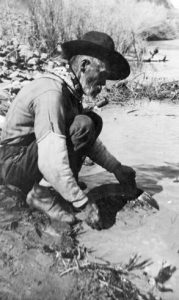 Some young men in Utah naturally hankered toward the California gold fields discovered just six months after the Mormons arrived in the Salt Lake Valley. But Brigham Young, favoring an agrarian rather than mining economy, firmly discouraged them: “If you Elders of Israel want to go to the gold mines, go and be damned.” On the other hand, Mormon colonizing efforts suffered from a severe lack of cash. So church leaders outfitted companies of “gold missionaries” whose assignment was to send back the precious California metal so the church could buy badly needed machinery and equipment from the East. These missionaries no doubt kept a percentage of their pickings to cover costs and provide for their families in Utah.

In addition to those called to the task, a number of Mormon miners selected themselves. Some had mustered out of the Mormon Battalion and stopped long enough in the Sierra Nevada to dig some quick cash before continuing to Utah. Others were boys itching for a chance to make their fortunes and not very pleased with prospects in the Great Basin. They could not see the harm in spending just one summer in California.

Three such young men were the brothers J. Wellington and David Seely, and a brother-in-law, Edwin Pettit. Their story shows the interplay between early Mormons’ intense community loyalty and their frontier-like independence and drive to make good. It also shows that although Brigham Young’s words appear to have allowed no room for individual choice, he actually tolerated a fair amount of deviance from his directives.

Both Seelys were young married men who had crossed the plains with their aging parents. The first two years in Salt Lake Valley, watching their wives and small children go hungry, must have hit them hard. When asked to sign on as teamsters, they jumped at the opportunity. Their employer was a man named Pomeroy who had brought a wagon train of merchandise from the States to trade for oxen which he intended to sell in California. Private merchandising was acceptable in Mormondom as long as a merchant honored local currency and did not gouge.

The Pomeroy train left for California in November 1849, about the same time as several church trains. It consisted of 50 wagons, each with two drivers and four oxen. In addition, it had a considerable cattle herd. Some of the animals had come from the East earlier that year while others were fresh Utah stock.

Each of the young Utahns found himself responsible for 40 to 50 cattle. Even traveling along the southern route they soon encountered rain, mud, and snow over six inches deep. By the time the company reached what is now the California border, according to Edwin’s journal, the cattle that had crossed the Plains that spring were wearing out. At first he would have to leave 2 behind, then 5, and finally 19 in one day. At Mud Lake (northwest of present-day Baker), Pomeroy consolidated to 7 wagons, burning the other 13. Here the Seely party, no longer needed, opted to leave the slower-moving Pomeroy.

Other companies fared as poorly. Pomeroy had come upon an independent band, lost and starving in the desert; the Seelys joined and assisted this group, which was also headed for the gold fields. In addition, there were the Huffaker and Jefferson Hunt companies, the latter including Mormon Apostle Parley P. Pratt as passenger. Pratt’s journal describes problems similar to Pomeroy’s.

It took the Seely party over five months to reach Coloma by way of San Bernardino, Los Angeles, sailing vessel to San Francisco, steamboat to Sacramento, and mule pack into the Sierra. They mined only three months. By August, Wellington Seely was ill and all three men were homesick and discouraged. Apparently they deposited their earnings in the same Salt Lake church “gold account” used by the gold missionaries, and from records of this account it appears the three of them together sent home no more than $350. Considering that one man could earn $50 per month working in Utah, this was less than a third of what they might have earned had they stayed home.

These Utah gold seekers had the same experience as the vast majority of other forty-niners. The likely result of this venture was that the young men decided Brigham Young was not as dumb as they had thought. Ultimately, two of them would settle down in Sanpete County and raise sheep and alfalfa. The other, David Seely, had gotten a whiff of the California climate and would never again be content in Utah.