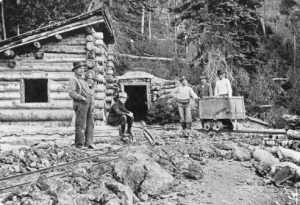 Gold can be found in trace amounts in almost all rocks and even in ocean water, but finding it in quantities large enough to make mining profitable is rare. Erosion often washes gold out of surface rocks. Gold particles are about seven times heavier than rock particles of a similar size. As a result, nuggets and flakes of gold tend to sink to the bottom of water-deposited gravel and sand, especially in stream-beds. This gold is recovered using placer mining techniques. Lode mining, or hard-rock mining, recovers gold from veins or reefs that extend underground. The gold-bearing rock is removed from the mine using pick and shovel, blasting, and other methods. 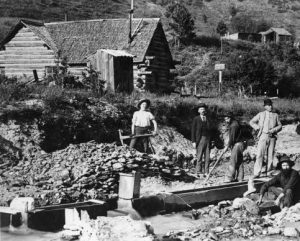 Placer mining, widely used by the Forty-niners during the California gold rush and in the Yukon, was rare in Utah with a few notable exceptions, including Bingham Canyon. Precious metals were initially discovered in the Oquirrh Mountains by brothers Thomas and Sanford Bingham in 1848–49. More important to the history of mining were the discoveries made in that area on September 17, 1863, by men and women associated with the California Volunteers stationed at Fort Douglas and other individuals. They organized the West Mountain Mining District, the first in Utah, and staked numerous claims. Placer mining in Bingham Canyon began in 1865, and by 1871 a reported $1 million in gold had been taken from these claims.

The most extensive use of various placer mining techniques occurred in southeastern Utah where prospectors began finding placer deposits of gold in the 1880s. Although stories of lost Spanish mines and secret Navajo mines in that area persist, the first gold rush in southeastern Utah began in 1883 after Cass Hite found placer gold in Glen Canyon on the Colorado River. On December 3, 1883, Hite, Lewis P. Brown, and seven others organized the Henry Mountains Mining District. Four years later Hite helped organize the White Canyon Mining District. Unfortunately, the gold found by prospectors along the Colorado River was very fine, making it extremely difficult to recover. 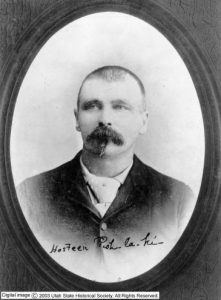 Cass Hite discovered placer gold on the Colorado River in Glen Canyon. His American Indian name is printed on photograph.

Jack Sumner and Jack Butler found gold in the Bromide Basin on Mount Ellen in the Henry Mountains in 1889 and started another gold rush. A town called Eagle City boomed and busted quickly when the gold ran out. In 1892 discoveries in the LaSal and Abajo mountains triggered another gold rush, followed by news of gold in the San Juan River country.

Hundreds of individual prospectors panned and sluiced with great difficulty in the slickrock country with only limited success. Lack of water, except in the major rivers, made placer mining difficult, if not impossible. The Hoskaninni Company built a huge gold dredging works in Glen Canyon at the turn of the century, and the Zahn Mining Company ran the largest placer operation on the San Juan River in the early 1900s. All these efforts, small and great, produced little gold during the heyday of the southeastern Utah gold rushes, 1883–1911.

Lode mining for gold was more successful. Two Tooele County mining areas are known for their gold. Mercur, one of the most important mining towns in Utah, did not fully exploit its gold ores until the 1890s when a cyanide processing plant was built there. When ore is crushed and treated with 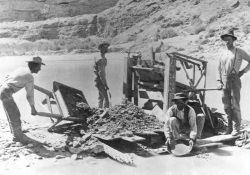 Placer mining for gold on the San Juan River, 1889

cyanide, the gold dissolves and can later be refined to produce almost pure gold. Daniel C. Jackling, Utah’s copper king, and George H. Dern, mining engineer and later governor of Utah, were two of the major figures associated with the development of Mercur. After years of inactivity in Mercur, improved technology has periodically allowed gold to be extracted from old mine and mill tailings there when the price of gold has risen high enough to make such processing profitable.

Gold Hill on Utah’s western border enjoyed a much shorter life as a gold mining town. The Clifton Mining District was organized in the area in 1889 and the town of Gold Hill established in 1892. As is so often the case with mining towns, Gold Hill’s mines failed to produce as much of the gleaming metal as its founders had hoped. However, two world wars created a national need for the arsenic and tungsten found in great abundance at Gold Hill, and the town enjoyed waves of mild prosperity. 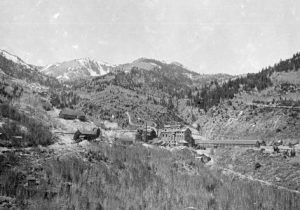 Annie Laurie Mine and Mill in Kimberly, Piute County, June 1917

Piute County was the scene of another gold rush. The Gold Mountain Mining District and its central town of Kimberly flourished in the early 20th century. The Annie Laurie Mine was a famous gold producer. In 1902 a new cyanide mill in Kimberly processed 250 tons of ore a day. According to George A. Thompson, writing in the Frontier Times of June-July 1974, Gold from Kimberly’s mines was shipped in bars 6″x10″x10″ valued at over $20,000 each, on the Shepard Brothers Stages to the railroad in Sevier, eighteen miles to the northeast. The heavy yellow bars were stacked on the floor of the stagecoach, between the passengers’ feet. An armed guard always rode ahead of the coach.

But Kimberly, too, enjoyed only a short if gaudy career. Its boom was over by 1907.

As shortlived as Utah’s gold rushes have been, the state nevertheless continues to produce gold in impressive amounts. In 1944 Utah gold amounted to 34.5 percent of the U.S. total. In 1983, Utah mines produced 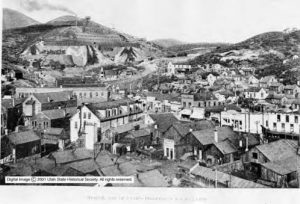 Mercur, Utah, in June 1902. Fire—the nemesis of mining towns with their many wooden buildings–swept through Mercur not long after this photograph was taken.

For the most part Utah’s gold production has never been keyed to great finds of free gold in placer deposits or rich lodes underground. In Utah, gold is most often found in the same ore bodies that produce silver, lead, zinc, and copper. The Bingham copper mine, for example, has been a steady producer of gold for many decades; and in their heyday the mines of Park City and Juab County’s Tintic Mining District produced large amounts of gold in addition to their silver and other metals. In mining and refining copper and silver—historically the most important metals in Utah’s economy—mine owners have come as close as one can outside of fairy tales to possessing a goose that lays golden eggs.