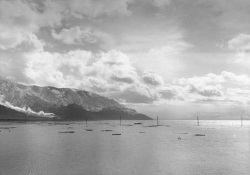 Antelope Island, one of the islands in the Great Salt Lake

The Great Salt Lake is both the largest body of water between the Great Lakes and the Pacific Ocean and the largest salt lake in the western hemisphere. The Great Salt Lake is the major remnant of Lake Bonneville, a large freshwater lake of the Pleistocene era (75,000–7,250 B.C.) that occupied much of western Utah. The lake occupies one of the basins of the Great Basin, and is located at the western margin of the Wasatch Mountains of the Rocky Mountain Range. 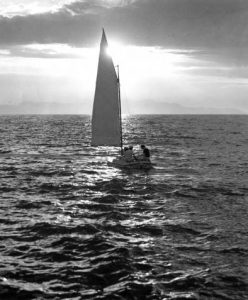 Sailing on the Great Salt Lake

The lake receives water from numerous perennial and intermittent streams originating in the surrounding mountains, the most important of which are the Bear, Weber, and Jordan rivers. No streams empty from the lake, and its high salinity is caused by the accumulation of minerals with no removal and the accompanying water evaporation. The lake occupies a broad level valley that has been created as deposits eroded from the surrounding mountains have filled the valley with sediments thousands of feet deep. The level nature of the valley is responsible for wide variations in the surface area of the lake, as a rise of only a few feet during wetter years can increase the surface area dramatically. In 1962 the lake elevation was 4,192 feet above sea level, giving it a surface area of 969 square miles (620,400 acres). In the early 1980s the lake reached an elevation of 4,212 feet above sea level, giving it a surface area of 2,300 square mile (1,472,000 acres). 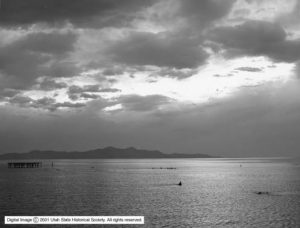 Sunset on the Great Salt Lake

The existence of a large body of water in an arid region, especially a salt lake, attracted early attention. Native American cultures used the freshwater marshes and streams around the lake for hunting and fishing. The first European reports of the lake seem to have been by Baron Lahontan, who reported in 1703 that he had seen a region west of the Mississippi which contained a large salt lake. The next recorded information about the lake came from the Dominguez-Escalante expedition. Reaching Utah Lake in 1776, they were informed by Indians that it was joined to a much larger lake to the north whose waters were “harmful or extremely salty wherefore . . . anybody getting a part of his body wet instantly feels severe itching around the wet part.” The most important effect of the Dominguez-Escalante report was its inclusion of a map showing a river connecting the Great Salt Lake to the Pacific Ocean. This mythical river was later sought by explorers and settlers as a route to the Pacific.

Trappers explored the region of the Great Salt Lake, beginning with Robert Stewart, who was at Bear Lake in 1812 but apparently did not visit the Salt Lake. Later trappers visited the lake, but is unclear who was first. Jim Bridger reportedly saw the lake in 1824. In 1826 a group of four trappers from the Rocky Mountain Fur Company spent twenty-four days circumnavigating the lake, seemingly putting to rest the idea of a river flowing from it to the Pacific Ocean. In spite of this, the Fremont expedition of 1843–44 visited the Great Salt Lake in 1843 and searched for a river flowing west to the Pacific, finally concluding that the lake indeed occupied part of a great basin which had no drainage to the sea.

Reports of the valley of the Great Salt Lake reaching Mormon leaders in Nauvoo, Illinois, prompted them to select it as a destination by 1845, and the first Mormon pioneer party reached the Great Salt Lake Valley on 22–24 July 1847. On 27 July Brigham Young and other leaders of the group visited the lake, and by August the lake was supplying salt to the settlers.

The high salt content of the lake has restricted its use, but several resorts have existed on its shores from time to time, the most famous being Saltair. From 1893 until it burned in 1925, and again after its reconstruction until drought isolated it in the 1930s, it was a major recreation facility. More recently sailing has been a popular activity at the lake. The lake has also been associated with mining its salt and collecting its brine shrimp for fish food. From the earliest Indians who obtained common salt to modern industries extracting a variety of minerals from its waters, from the tourists visiting the lake to experience the buoyancy provided by its waters to locals sailing its waters, the Great Salt Lake has remained a valuable and unique part of America’s geography.