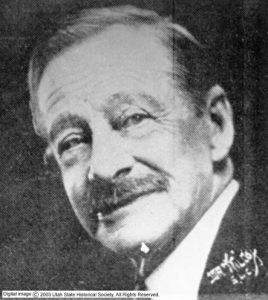 Making a living collecting bird droppings does not exactly sound like the ideal job, nor are mineral patents for the mounds of guano deposits on the islands of the Great Salt Lake particularly a great way to get rich. However, from the mid–1890s until some time after the turn of the century a guano harvesting business did exist in Utah. The bird rookeries of Gunnison and Hat (Bird) islands produced thousands of baby gulls, pelicans, and herons. These islands were also the production sites of a substance that was useful as fertilizer. Guano, rich in phosphate and nitrate, had been excreted by the birds for centuries and deeply coated the rocks of the islands.

Gunnison Island in the northwest part of Great Salt Lake is only a mile long and contains about 160 acres of land, yet is the nesting ground during early summer for huge populations of gulls and pelicans and some herons. Its rocks provide excellent homes for the infant birds and the surrounding waters protect them from predators. The 22-acre pile of granitic conglomerate that is Hat Island in the southwestern area of the lake serves the same purpose. Where there are birds there is bound to be bird waste; thus enterprising minds could see value in those deposits covering the rocks the birds chose as homes for their young.

Commercial guano gatherers first came to Gunnison Island in the mid-1890s and began their work. Alfred Lambourne, a Utah artist, lived on Gunnison Island for a year starting in November 1895 and shared the island with guano sifters about whom he wrote in his book of musing and art, Our Inland Sea. He had been living on the island alone until March when the guano sifters came to spend several months harvesting the rich deposits. All at once the island seemed a beehive of activity, causing the pelicans to look elsewhere for their nesting sites. The gulls, however, were not deterred by mere commerce.

The guano sifters built a long, narrow cabin of rounded slabs and filled it with provisions, utensils, and their implements of labor. With their strange occupation and various nationalities and appearances, they intrigued Lambourne who saw them with an artist’s eye and enjoyed their company on the island despite their destroying his solitude.

In the March wind the guano sifters went right to work. With pick and shovel, some dug up the guano deposits while three men worked at the sieves. Enveloped in clouds of brownish dust they passed the mineral through the screens and put it into bags. The men attacked the guano mightily, and the area soon was covered with trenches and pits as they gathered the ancient deposits.

Among the crew that Lambourne watched were a Pole, a Russian, a Scot, and an Englishman. They had traveled the world harvesting guano in places as distant as the islands off the coast of Brazil and in the Mediterranean Sea. Lambourne nicknamed one brawny man “the Drudge” because of his strength and work habits. The genial guano sifters provided pleasant company for Lambourne on the lonely island. However, the gulls looked upon them as invaders, screaming constantly at them.

By early winter their work had ended for the season, and a schooner came to take them and their product away. Lambourne too left the island before a new crew would arrive.

Sifters also worked Hat Island. A cabin built by them remained for years as evidence of their occupation.

The first carload of Utah guano was marketed in April 1895. Several hundred tons of guano fertilizer were used by Utah farmers, who apparently achieved favorable results with it. Mineral claims were filed on the islands. Efforts were made to promote the produce. The Mountain Empire: Utah, a book written by George E. Blair and R. W. Sloan to promote Utah, praised the substance as being rich in phosphoric acid, nitrogen, ammonia, and potash—ingredients that would make an excellent fertilizer. In a sworn statement to the U.S. Land Office in Salt Lake City, August H. Vogeler told of the two-pound onions and excellent lawns he grew when he tested the guano from the islands. Chester A. Bullock, a fertilizer expert of Ohio who visited and analyzed the Gunnison Island deposits, wrote a letter to the Utah Guano Company stating that the deposits were valuable and that the company should find a “ready market.” In 1904 it was believed the guano could be “dug, sacked and placed on the train for $2 per ton,” according to Blair and Sloan.

Despite such optimism, the guano business did not fly. It never proved a successful business venture. Although there was easy access to the guano, it was difficult to harvest. Additional problems occurred when rain washed the deposits into the lake as it accumulated. Interest in it died.

Once the guano sifters permanently left the islands, the birds returned. Gulls, pelicans, and herons again congregated on Gunnison and Hat Islands to nest and raise their young in peace. Once again thousands of wings flashed in the sunlight reflected by the salty lake, myriads of raucous calls filled the air, and bird droppings coated the rocks.