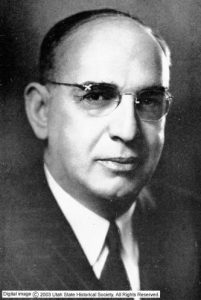 Herbert Samuel Auerbach was born in Salt Lake City on October 4, 1882, to Samuel H. and Eveline Brooks Auerbach. His father was a partner in the pioneer merchandising firm of F. Auerbach & Brother that became one of the city’s leading department stores, second in size only to ZCMI. Herbert received his early education in the local schools and in 1897 went abroad to study in the Fresenius Laboratories and the J. J. Meier School at Wiesbaden, Germany. Three years later he took up studies in Lausanne, Switzerland, at the Conservatory of Music and Lausanne Technical School. After graduating he toured the concert stage in Europe as a violinist. He then entered the Columbia University School of Mines in New York City and received a master’s degree in electrometallurgy in 1906. For several years he worked as a consulting engineer and was in charge of numerous mining properties in Colorado and Idaho. Gradually, though, he began to take more interest in his family’s business. From 1911 on he devoted all his time to it, becoming president of Auerbach Company and the family real estate firm and other businesses. Unmarried, he lived at 268 South State Street in the Brooks Arcade.

With the help of his younger brothers, George and Fred, Herbert expanded the department store and moved it from Main Street to the southwest corner of State Street and Third South. His most ambitious project was designing and building, kitty-corner from the store, the Centre Theatre, at the time the largest and one of the best equipped motion picture houses in the city.

Herbert had barely had time to settle in as a new member of the Board of Regents of the University of Utah in 1917 when he resigned and enlisted in the Army after the U. S. entered World War I. He served as a major in the Ordnance Department until 1919. He was a member of Salt Lake Post No. 2, American Legion, and involved in numerous clubs and service organizations, including the Alta Club, Rotary Club, and Chamber of Commerce. Proud of his pioneer Jewish heritage, he served as vice-president and president of the Sons of the Utah Pioneers. He was also a member of the American Society of Composers, Authors, and Publishers. In 1925 he began the first of two terms in the Utah State Legislature. A true westerner, he realized the importance of water and was a member of the Metropolitan Water Board of Salt Lake City from 1935 to 1942 and a director of the Colorado River Basin Water Users Association, 1941–42.

But merely to list all of his memberships and directorships would not do this versatile man justice. His keen interest in pioneer lore had been sharpened by his travels all over the West as a mining engineer and a sportsman. He also had fond memories of stories told by his father and uncle of their adventures on the road as merchants in California, Nevada, and Utah. This led to one of his most absorbing hobbies—western history. His collection of books, manuscripts, maps, documents, and pictures of the Old West was, at the time of his death, one of the outstanding collections of its kind in private hands. Another priceless historical collection consisted of the furniture, family utensils, and other relics of Joseph Smith, laboriously picked up piece by piece and year by year in out-of-the-way places in Missouri, Illinois, Ohio, and New York where the Mormon prophet had lived. The collection was exhibited for some time in the Auerbach store, and then he presented it to the General Authorities of the LDS church.

Auerbach spoke French and German and also became a competent translator of early Spanish documents. He was especially interested in the early Spanish padres who traveled in the West. He translated Father Escalante’s 1776–77 journal, which appeared in Utah Historical Quarterly in 1943. He also wrote articles for UHQ, including studies of Escalante’s route and itinerary, and of early trails, forts, trappers, and traders. A member of the Historical Society’s Board of Control, as it was then called, he served as its president from the time of his appointment in 1936 until his death in 1945.

In addition to history, Auerbach wrote poetry that was widely published in the West. This accomplishment, along with his musical talent, led him in later years to the writing of ballads and religious songs, of which more than 100 were published. Some of them were written in collaboration with Anthony C. Lund, director of the Tabernacle Choir.

Auerbach’s philanthropies were extensive, varied, and seldom heard of by others, according to J. Cecil Alter. But one of his interests, Old Folks’ Day, held at Liberty Park for many years, was more widely recognized. On this occasion he loved to distribute baskets of fruit and foodstuffs grown on his own Meadowbrook farm or selected from his grocery department. It was his tribute not only to the city’s aged but also to the memory of his parents.

He died after a brief illness on March 19, 1945. His success in life was attributed by his Rabbi to his instinctive quest for “Those things which unite men, rather than the differences which break them up into sects.” His funeral on March 23 was held not in the Synagogue but in the larger capacity Assembly Hall on Temple Square where people of all religious faiths and those of no affiliation paid their respects. Jessie Evans Smith, well-known singer and wife of then-Apostle Joseph Fielding Smith, accompanied by Tabernacle organist Frank W. Asper, sang “To Every Heart Must Come Some Sorrow,” the words and music both by Herbert S. Auerbach, Renaissance man.