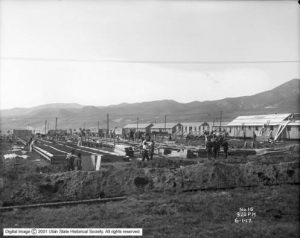 After the Civil War began in 1861 it was necessary to recall regular troops from frontier duty for action against the South, leaving the overland mail route to California unguarded from attack by hostile Indians. President Lincoln called for volunteers, and Patrick E. Connor was appointed Colonel (Brevet Major General) of the Third California Volunteer Infantry. Colonel Connor was directed to establish a post near Salt Lake City, both to protect the overland mail route and to keep an eye on the Mormons.

Camp Douglas (Fort Douglas) was established on 26 October 1862; it was named after the late Senator Stephen A. Douglas of Illinois. Winter was approaching and dugouts were quickly built. The next summer log buildings were erected. The post was rebuilt of red sandstone in 1873–76 and the existing brick buildings were built in the early 1900s.

The first major Indian engagement for the troops was the Battle of Bear River in Idaho on 28 January 1863. A band of Shoshoni Indians were almost annihilated, nearly three hundred Indians were killed, while twenty-three soldiers were killed or died later. The volunteers were discharged by 1866 and were replaced by regulars from the 18th Infantry.

Rails were joined at Promontory, Utah, in 1869 permitting rapid deployment of the local troops. Fort Douglas units participated in the northern plains campaigns of the 1860s and 1870s and in the Sioux War of 1890. During the Spanish-American War of 1898, the 24th Infantry, a Black regiment stationed at Fort Douglas, fought gallantly in Cuba.

Fort Douglas expanded quickly during World War I as thousands of recruits arrived for their training. A general hospital was established in 1918 but was never completed, and a prisoner-of-war compound was built for German prisoners. The 28th Infantry, nicknamed “Rock of the Marne” in World War I for stopping a German offensive, arrived in 1922. The regiment departed in August 1940 and Fort Douglas temporarily became an air base in conjunction with the Salt Lake Municipal Airport.

After the Japanese attack on Pearl Harbor, Ninth Service Command Headquarters was moved from the Presidio, San Francisco, to Fort Douglas in January 1942. The fort also directed the repair of military vehicles and served as a finance center until 1947. Once again, a prisoner-of-war camp was established at the fort.

The Ninth Service Command was dissolved in 1946, and in 1947 the army announced that the fort was surplus and some land was turned over to the University of Utah and other agencies. However, the Korean War delayed dismantlement of the fort, which served as an induction center and administrative headquarters for the Utah Military District. The university received land in 1962 for a medical center and again in 1967 for a research park.

Closure of the post was announced in 1964; the flag was lowered on 25 June 1967 and Fort Douglas became a subpost of Fort Carson, Colorado. The army retained only the parade ground and many of the historic buildings, and also reserved water rights in Red Butte Canyon. The fort continued to serve as headquarters for the 96th Army Reserve Command. The fort was listed in the National Register of Historic Places in 1970 and was designated a National Historic Landmark in 1975. In 1989 Congress finally approved closure of Fort Douglas as a military facility. Transfer of the fort to the University of Utah began in 1991 and was completed in late 1993.