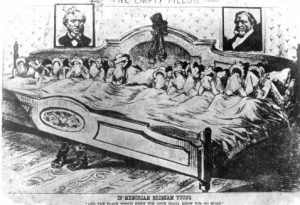 When establishing the LDS church, Joseph Smith recorded numerous revelations he claimed to receive, often in answer to questions about the Bible, which are now included in the Doctrine and Covenants, part of the LDS canon. In answer to his question as to why many of the Old Testament leaders had more than one wife, Smith received what is now known as Section 132. Although the revelation was not recorded until 1843, Smith may have received it in the 1830s and married his first plural wife, Fanny Alger, in 1835. Polygamy was not openly practiced in the Mormon Church until 1852 when Orson Pratt, an apostle, made a public speech defending it as a tenet of the church. From 1852 until 1890, Mormon church leaders preached and encouraged members, especially those in leadership positions, to marry additional wives.

A majority of the Latter-day Saints never lived the principle. The number of families involved varied by community; for example, 30 percent in St. George in 1870 and 40 percent in 1880 practiced polygamy, while only 5 percent in South Weber practiced the principle in 1880. Rather than the harems often suggested in non-Mormon sources, most Mormon husbands married only two wives. The wives usually lived in separate homes and had direct responsibility for their children. Where the wives lived near each other, the husbands usually visited each wife on a daily or weekly basis. While there were the expected troubles between wives and families, polygamy was usually not the only cause, although it certainly could cause greater tension. Since polygamy was openly practiced for only a short time by Mormons, there were no established rules about how family members should relate to each other. Instead, each family adapted to their particular circumstances.

Reactions from outside the church to statements about polygamy were immediate and negative. In 1854 the Republican party termed polygamy and slavery the “twin relics of barbarism.” In 1862 the United States Congress passed the Morrill Act, which prohibited plural marriage in the territories, disincorporated the Mormon church, and restricted the church’s ownership of property. The nation was in the midst of the Civil War, however, and the law was not enforced. In 1867 the Utah Territorial Legislature asked Congress to repeal the Morrill Act. Instead of doing that, the House Judiciary Committee asked why the law was not being enforced, and the Cullom Bill, an attempt to strengthen the Morrill Act, was introduced. Although it did not pass, most of its provisions later became law. Out of a number of other bills introduced during the 1870s against polygamy, only the Poland Act passed, in 1874. It gave district courts all civil and criminal jurisdiction and limited the probate courts to matters of estate settlement, guardianship, and divorce.

The Mormons continued to practice polygamy despite these laws, since they believed that the practice was protected by the freedom of religion clause in the Bill of Rights. To test the constitutionality of the laws, George Reynolds, Brigham Young’s private secretary, agreed to be tried. In 1879 the case reached the Supreme Court, which upheld the Morrill Act: “Laws are made for the government of actions, and while they cannot interfere with mere religious belief and opinion, they may with practices.”

In 1882 Congress passed the Edmunds Act, which was actually a series of amendments to the Morrill Act. It restated that polygamy was a felony punishable by five years of imprisonment and a $500 fine. Unlawful cohabitation, which was easier to establish because the prosecution had to prove only that the couple had lived together rather than that a marriage ceremony had taken place, remained a misdemeanor punishable by six months imprisonment and a $300 fine. Convicted polygamists were disenfranchised and were ineligible to hold political office. Those who practiced polygamy were disqualified from jury service, and those who professed a belief in it could not serve in a polygamy case. All registration and election officers in Utah Territory were dismissed, and a board of five commissioners was appointed to direct elections.

Because the Edmunds Act was unsuccessful in controlling polygamy in Utah, in 1884 Congress debated legislation to plug the loopholes. Finally, in 1887, the “hodge-podge” Edmunds-Tucker Bill passed. It required plural wives to testify against their husbands, dissolved the Perpetual Emigrating Fund Company (a loan institution that helped members of the church come to Utah from Europe), abolished the Nauvoo Legion militia, and provided a mechanism for acquiring the property of the church, which already was disincorporated by the Morrill Act. The Cullom-Struble Bill with even stricter measures was debated in 1889, but the Mormon church helped to prevent its passage by promising to do away with polygamy.

All of these pressures had an impact on the church, even though they did not compel the Latter-day Saints to abolish polygamy. Church leaders as well as many of its members went into hiding—on the “underground” as it was called—either to avoid arrest or to avoid having to testify. Mormon church President John Taylor died while in hiding. His successor, Wilford Woodruff, initially supported the continued practice of polygamy; however, as pressure increased, he began to change the church’s policy. On 26 September 1890 he issued a press release, the Manifesto, which read, “I publicly declare that my advice to the Latter-day Saints is to refrain from contracting any marriages forbidden by the law of the land.” The Manifesto was approved at the church’s general conference on 6 October 1890.

Rather than resolving the polygamy question, however, according to one historian: “For both the hierarchy and the general membership of the LDS Church, the Manifesto inaugurated an ambiguous era in the practice of plural marriage rivaled only by the status of polygamy during the lifetime of Joseph Smith.” Woodruff’s public and private statements contradicted whether the Manifesto applied to existing marriages. As a result of the Manifesto, some men left plural wives; others interpreted it as applying only to new marriages. All polygamous general authorities (church leaders including the First Presidency, Council of the Twelve Apostles, church patriarch, First Council of Seventy, and Presiding Bishopric) continued to cohabit with their wives. Based on impressionistic evidence in family histories and genealogical records, it appears that “most” polygamists followed the general authorities’ example.

Neither did all new plural marriages end in 1890. Although technically against the law in Mexico and Canada, polygamous marriages were performed in both countries. Mormon plural families openly practiced polygamy in Mexico; the Canadian government allowed Mormon men to have only one wife in the country, so some men had a legal wife in the United States and one in Canada. In addition, a few plural marriages were performed in the United States.

During the Senate investigation in 1904 concerning the seating of Senator-elect Reed Smoot, a monogamist but a member of the Quorum of the Twelve Apostles, Mormon Church President Joseph F. Smith presented what historians have called the “Second Manifesto” on 7 April 1904. It included provisions for the church to take action against those who continued to perform plural marriages and marry plural wives. Matthias Cowley and John W. Taylor, both apostles, continued to be involved in performing or advocating new plural marriages after 1904, and, as a result, Cowley was disfellowshipped and Taylor excommunicated from the church. In 1909 a committee of apostles met to investigate post-Manifesto polygamy, and by 1910 the church had a new policy. Those involved in plural marriages after 1904 were excommunicated; and those married between 1890 and 1904 were not to have church callings where other members would have to sustain them. Although the Mormon church officially prohibited new plural marriages after 1904, many plural husbands and wives continued to cohabit until their deaths in the 1940s and 1950s.

Fundamentalist groups who believe that the church discontinued polygamy only because of government pressure continued the practice. As they were discovered by the LDS church, they were excommunicated. Some of these polygamists have appointed leaders and continue to live in groups, including those in Colorado City (formerly Short Creek), Arizona, and Hilldale, Utah. Others, such as Royston Potter, practice polygamy but have no affiliation with an organized group.

More reading on The History of Polygamy is available.

The Wives of Brigham Young