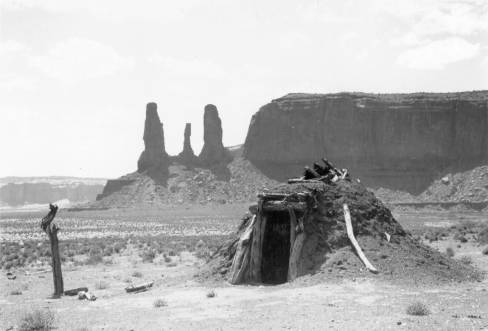 The scenic area known as Monument Valley in the extreme southeastern corner of Utah was at one time dominated by a little known Navajo chief called Hush-Kaaney (anglicized “Hoskaninni” and also “Hoskinnini”). From 1862 until his death in 1912 Hoskaninni was “emperor” of the valley and largely kept white visitors out in protection of the land, his people, and his “secret” silver mine. Legends of the chief’s exploits in defense of his private kingdom cloud his history. The most detailed information known about him was gathered in an 1939 interview of his son, Hoskaninni-Begay, by forest ranger Charles Kelly, which refutes many of the more sensational stories.

According to Hoskaninni-Begay, his father’s independent “rule” of Monument Valley grew out of the 1863 roundup of Navajos in that region by Col. Christopher “Kit” Carson. Under orders from Gen. James H. Carleton to track down every Navajo, some 700 troops under Carson’s command began in the summer of 1863 to attack the scattered Navajo enclaves, killing those who resisted and capturing the others. The once-rich Navajos saw their hogans and crops burned and their flocks confiscated. Utes, Pueblos, and European Americans joined the military in rooting out their former enemy. Over 300 Navajos were killed outright, more died of hunger and exposure during the winter, and hundreds of women and children were sold into slavery. It was one of the most violent campaigns waged against a major Indian tribe in North America. Starving and disheartened, an eventual 8,500 Navajos made the “long walk” to Bosque Redondo on the Pecos River in eastern New Mexico, there to be watched by troops at nearby Fort Sumner. General Carleton’s plan was to make the Navajos into self-sufficient, settled farmers. The plan failed, and after years of intense suffering the Navajos were allowed to return in 1868 to the area now encompassed by their reservation in Arizona, New Mexico, and Utah.

At the beginning of this campaign against the Navajos the 35-year-old Hoskaninni heard that some of his family members had been caught. In response, he angrily vowed to his immediate family and friends that he would die before he would leave. Despite this determination, when the soldiers came looking for Hoskaninni they surprised him, and the small band of seventeen barely escaped capture by scattering haphazardly in the desert to hide. Luckily, the soldiers did not find any of them, and when night fell they regrouped and began walking north into enemy Ute territory. They had no food and only one horse and one rifle among them, but they had managed to round up a flock of twenty sheep to take along. The exiles traveled at night and slept during the day. They survived primarily on seeds, with an occasional rabbit as a “feast.” After traveling several days in a northwesterly direction the group—by now footsore, hungry, and tired of climbing in and out of deep canyons—eventually reached the south end of Navajo Mountain where they came upon a little stream of water surrounded on all sides by green grass. There Hoskaninni’s wife sat firmly upon the ground and refused to go any farther. As a result, the group made camp and remained there for the following six years. The spot was still in Ute territory, but due to its remoteness only one Ute ever found the group and he chose not to betray them.

By the time the weary band had reached their isolated spot it was late in the year, and Hoskaninni sent them into the surrounding country to gather grass seeds and pine nuts for winter use. All twenty sheep had survived the journey, but the chief refused to allow any to be eaten as he hoped the herd would increase in the spring. Knowing that they might starve without enough winter food, he pushed them hard and angrily reprimanded anyone he felt was lazy. Although this harsh attitude earned Hush-Kaaney his name (meaning “the angry one”), it was essential in saving them from starvation that first winter.

The ensuing years proved good. Their sheep herd increased so that they had plenty of meat and wool for blankets. In addition, on one exploratory trip into the mountains, Hoskaninni returned with several large pieces of silver that the group made into ornaments and jewelry. Hoskaninni periodically returned to the mountains to retrieve more of the precious mineral but never told anyone the silver mine’s location.

In 1868 most Navajos were released from internment at New Mexico and returned to their lands where each was given two sheep and some seeds to start a new life. The following year when Hoskaninni and his band came out of hiding and moved into the heart of Monument Valley they were the strongest and richest Navajos in the entire region.

Other Navajos began to take notice of the group’s large amounts of silver, and soon rumors spread to white settlers of a silver mine in Monument Valley. Many came in search of the hidden silver, but Hoskaninni refused to divulge the location of his mine and would not return there himself for fear of being followed. In 1879 two white prospectors came looking for the secret mine and reportedly even located it, but both ended up dead. Hoskaninni’s band was blamed for the killings; no proof was ever produced, and in the 1939 interview Hoskaninni’s son maintained it was renegade Utes who committed the murders. Regardless, most whites stayed away for fear of the chief.

Hoskaninni’s family continued to prosper in Monument Valley until his death in 1912. According to custom, much of Hoskaninni’s silver was buried with him and the remainder of his property was divided among his survivors. His son Hoskaninni-Begay died in poverty in 1941. Hoskinnini Mesa, 11 miles west of Goulding, San Juan County, was named in memory of the chief.