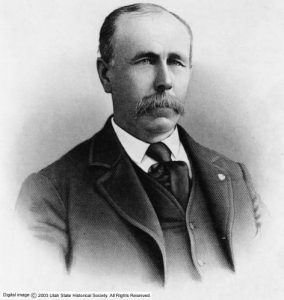 In 1965 a retired military couple, Glenn and Gloria Foster, bought a turn-of-the century house on Mill Creek in Salt Lake County from its owner, a grandson of one of Utah’s few Mormon mining magnates, Jesse Knight. The house was not built by Knight but by one of the Neff brothers, pioneer millers; the Knight descendant had bought it in the 1950s. While exploring the attic, the Fosters discovered a manila envelope containing a bundle of mine account records once belonging to Jesse Knight.

A sheet for one of the incorporations, Plutus Mining Company, lists Jesse Knight as president, Jacob Evans vice-president and director, W. L. Mangum secretary/treasurer, and directors J. William Knight, David Evans, and George Havercamp with the name Walter Fitch of the Utah Sugar & Trust Company added by hand. Plutus was organized in 1907 with $100,000 in capital and 12,455 out of 1,000,000 shares issued at a par value of 10 cents. Claims included the famous Plutus and Mahogany mines in the Tintic Mining District. The company was sold in 1914 to Consolidated Mining Company, another Knight venture.

Altogether, the papers detail a Knight empire, the beginnings of which were related by a niece in Heart Throbs of the West. Jesse Knight formed his first mining company in 1892. It took him four years to strike a mother lode. According to the niece, it happened like this: one day he was prospecting “all by himself” on the east side of Godiva Mountain. Stopping to rest under a pine tree, he heard a voice say, “This country is here for the Mormons.” This convinced Knight the claim was valuable and that whatever wealth it produced should be distributed–a principle he instilled in all his children.

Knight’s technique was to study the limestone in which known ore deposits had formed using this as a guide for estimating the placement of other veins. A 150-foot tunnel had already been dug during this property’s assessment, so Knight brought in three associates who extended the tunnel using jackhammers, drills, and blasting powder. They worked 24 hours a day in 8-hour shifts with Jesse himself hauling the dirt by wheelbarrow to the mouth of the mine.

In August 1896 they struck lead ore. The three associates were ecstatic, but Jesse remained calm, having expected this all along. He hauled the first diggings into the sunlight, dumped them on the ground, and said, “I have done the last day’s [manual] work that I ever expect to. I expect to give employment and make work from now on for other people.” Another famous Knight bonanza was the Mammoth. In 1874 surface outcroppings of this lode had been discovered but exhausted. Knight discovered the vein below surface. Other famous Knight mines were the Opex Standard, Dragon Consolidated, Iron Blossom, and Gemini. Some Tintic mines in the 1890s had a copper content as high as 48 percent, and their waste was so rich in gold and silver that small concentrators were built right on site. It is said a single 1907 carload of Tintic ore was valued at $107,000.

The attic papers show just how much employment Knight eventually created. The primary focus of his 65 companies was copper, iron, and coal mining, with gold, silver, and other precious metals as secondary products. Besides the Tintic mines, Knight acquired the infamous Emma at Alta, the West Mountain operation in Bingham Canyon, and Miller Hill at the head of American Fork Canyon. He also held important claims in several Nevada districts plus mining property in Arizona, Colorado, and Missouri.

But his papers reveal diverse ventures, including an ore-sampling company, the Utah-Pacific Railroad, and a grain and elevator company, all serving the Tintic mining camps. He acquired sugar, canning, and woolen mills. There is an account for a large stock ranch near Richfield, a record of his ownership of Springdell Resort in Provo Canyon, and a page for the Provo Opera House listing his wife Amanda Newell Knight as director with the notation that it was later sold to the state.