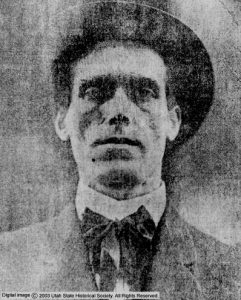 Joe Hill was a labor organizer and songwriter who was accused of murder and executed in Salt Lake City on 19 November 1915.

Joel Hagglund, better known as Joe Hill, organized for the Industrial Workers of the World and penned radical songs to aid the labor movement. One evening in January 1914, Hill asked a Socialist doctor in Murray to treat a bullet wound in his chest that he said he received while defending a woman companion. A few days after treating Hill, the doctor called the police.

His call was prompted by reports of a double murder the evening he treated Hill. A Salt Lake City grocer by the name of John G. Morrison and his seventeen-year-old son, John Arling Morrison, had been shot to death in the store. One of two masked assailants had been wounded. (Although the incident was presumed a robbery, no money was taken. Merlin Morrison recalled hearing the men say, “We’ve got you now.” The elder Morrison had been the target of an earlier shoot-out, during which he wounded a man.) The doctor’s tip led to murder charges against Hill who maintained his innocence.

The question of Hill’s guilt became polarized by labor issues and muddied by trial irregularities. On one hand, it seemed unlikely he could have traveled through the cold night from the capital to Murray with a chest wound; on the other, Hill refused to provide an alibi even to the judge during a private chat in chambers. Meanwhile his trial in the City and County Building within the labor-hostile valley sparked a national controversy as labor leaders insisted Hill was being framed by the copper bosses. His conviction prompted widespread national outrage and precisely the type of publicity the valley had tried so diligently to overcome.

While Hill languished in the Sugar House Prison, protests and telegrams flooded in, including one from the deaf and blind humanitarian Helen Keller. President Woodrow Wilson requested a stay of execution granted by the governor; but when the stay ran out, Hill died in a fury of bullets on 19 November 1915.

Since Hill had told the I. W. W.’s “Big Bill” Haywood (born in Utah in 1869) that he “didn’t want to be caught dead in Utah,” his ashes went to I. W. W. groups in every other state. Huge funeral demonstrations took place throughout the nation in answer to his admonition, “Don’t mourn, organize!” and Hill became labor’s martyr.