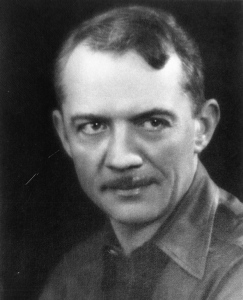 In American Cultural mythology the 1920s conjure up images of bathtub gin, raccoon coats, and tall, impossibly thin, short-skirted “flappers.” F. Scott Fitzgerald nicknamed the period “the Jazz Age” and wrote novels that chronicled the lifestyles of the young and fun-loving. Many of the period’s most enduring visual images were created by one of Utah’s most famous artists, John Held, Jr.

His father, John Held, Sr., was born in Geneva, Switzerland, and showed early promise as an artist. Mormon educator John R. Park discovered Held while searching for talented individuals in Europe. As he had with other gifted youngsters, Park brought Held to Salt Lake City, legally adopted him, and began training him as a future art instructor at Deseret University. He was not to become an educator; instead, he enjoyed a successful career as an engraver, draftsman, and leader of a popular band. John Jr.’s maternal grandfather, James Evans, an English convert to Mormonism and a handcart pioneer, helped design sets for the theater, and his daughter Annie frequently acted in local productions. John Held, Jr., was born to John and Annie Evans Held on January 10, 1889.

John Jr. received no formal art training and always claimed that his father and sculptor Mahonri M. Young, a grandson of Brigham Young, were his only teachers. By age three John Jr. was drawing animals. A family legend maintains that when the child became lost in the mountains his frantic parents found him happily modeling figures out of some clay soil. The two John Helds became a familiar sight in downtown Salt Lake City. Eight-year-old John Jr. drove a horse-drawn cart with advertising panels, behind which John Sr. played his cornet to attract attention.

John attended West High School and then joined the staff of the Salt Lake Tribune as a cartoonist with his classmate, Harold Ross. Held left Utah in 1910 to seek his fortune in New York City; Ross and Mahonri Young did likewise. Ross went on to found The New Yorker magazine, which often featured Held’s drawings; Young achieved success as a sculptor and remained lifelong friends with his fellow expatriate Utahns.

In addition to The New Yorker, Held sold cartoons to Judge, Puck, Vanity Fair, and Life—some of the most popular magazines of the era—and a number of other publications. His gentle satires and witty caricatures became enormously popular in the 1920s. He created Betty Coed, “the flapper,” along with her escort, Joe College. The characters both borrowed from and contributed to the real-life image of the 1920’s “Flaming Youth.” The artistic versatility and restless energy that marked Held’s life were already evident; although he quickly became a commercial success, he also engaged in “serious” art—including watercolor and sculpture, designed Broadway sets, wrote a comic ballet, illustrated other authors’ books, and wrote children’s stories.

Held made a fortune in the 1920’s and traveled in the high-society circles that his art ever so gently satirized. He served briefly as constable of Weston, Connecticut, and even ran unsuccessfully for Congress, noting that he had never made an arrest and promising to redesign the Congressional Record and to do the covers himself. Like so many others, Held lost most of his wealth in the stock market crash of 1929. By 1931 most of his art markets had dried up, and he suffered a severe nervous breakdown. He gave up his Connecticut home, and his first marriage ended in divorce. He began painting somber works and writing novels and short stories.

Although Held never recovered his commercial success, he continued to create during the succeeding decades. Critics praised his painting and sculpture, and his Jazz Age cartoons never lost their appeal. The Carnegie Corporation sponsored him as artist-in-residence at Harvard and the University of Georgia. Held eventually settled on a farm in Belmar, New Jersey, with a new family and his beloved animals. He died of throat cancer in 1958.