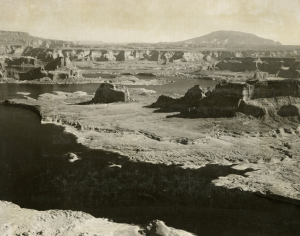 Navajo Mountain towers in the background overlooking this aerial view of Lake Powell at Padre Point. 1967

Red rock canyons and undulating valleys decorate Kane County. Wooded highlands are incised by deep canyons and contained by high cliffs. Wildlife roams amid vegetation adapted to the generally dry climate. Rivers are fronted by towering cliff walls. Layer upon layer of rock tells the story of the land, and the story of this mainly uninhabited county continues with the landscape. A sparse population generally utilizes the canyons, mesas, and plateaus for undeveloped grazing land. Here geography, climate, and geology are all done on a grand scale—high plateaus, deep dramatic canyon walls, and brilliantly contrasting colors of rock and sand. Here the silence of the surroundings can engulf one. In the words of one report: “Terraced plateaus, cliff-bounded mesas, monoclonal ridges, and straight-sided canyons—all impressive for magnitude and ruggedness”—are found in the Glen Canyon National Recreation Area in the eastern portion of the county.

That area found in the neighborhood of Lake Powell includes a maze of brilliant red-walled canyons cutting through the turquoise water. Side canyons at the edge of the lake offer natural marvels. This lake backs up into about 100 major side canyons. Natural arches and bridges, including Stevens Arch and La Gorce Arch, decorate the Escalante canyons. The Orange Cliffs and Romana Mesa are other attractions found at Lake Powell.

Lake Powell, which was formed by Glen Canyon Dam in nearby Arizona after its completion in the mid-1960s, contains some 1,960 miles of shoreline, equivalent to the length of the west coast of the continental United States. The lake, named after early Colorado River explorer John Wesley Powell, has a capacity of twenty-six million acre-feet of water. Extending for miles up the former channels of the Colorado River and the San Juan River, Lake Powell provides access to scenery previously considered by many to be inaccessible in Kane and San Juan Counties. However, the lake also covered many historic and archaeological sites with water.

Shaped like a triangle, with Lake Powell at its base, is the Kaiparowits Plateau. This plateau, in the eastern region of Kane County, is the county’s highest landform; its westward-tilted top has an altitude of more than 7,000 feet for a distance of fifty miles. The vast plateau remains largely uninhabited and undeveloped except for relics of coal exploration, an oil field, and some use for cattle grazing. Much of it is included in the newly created Grand Staircase-Escalante National Monument.

In Glen Canyon, according to one study, soil, in the true sense of the word, is rare in the area. On flat-topped mesas and plateaus the soil, weathered from the underlying rock, forms a thin mantle, but even here the soil cover is not continuous. On the plateau edges the areas of disintegrated shale and sandstone have no agricultural value. In general the conditions are unfavorable for making and retaining soils. Scanty vegetation, absence of sod, sudden showers, and rapid runoff favor removal of the soil as rapidly as it is formed. Large areas of bare rock are exposed. Most of the soil that is present in this region is transported soil. It has been brought to its present position by streams and wind. Some depressions on the surface and some rock cracks have been filled with debris washed from nearby places. A number of former canyons and tributary valleys are flanked with soil deposited at high-water stages. Similar soil is displayed here and there at the bases of cliffs, on open flats, and within canyons.

Like Bryce Canyon and other area canyons, Glen Canyon was carved out of sedimentary rock by a river—here the Colorado River wound its way over millennia through Navajo Sandstone and other rock deposited scores of millions of years before. Much of Glen Canyon and its side canyons are now submerged by the waters of Lake Powell, a loss bitterly lamented by many. The Glen Canyon region is actually a series of canyons of various sizes—deep, steep-walled, and separated by narrow ridges or broad mesas. The elevation generally varies from the level of Lake Powell at about 3,700 feet to mesas of more than 6,000 feet in elevation. The highest local elevation is 7,451 feet.