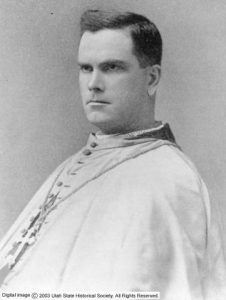 When Father Lawrence Scanlan, a Catholic Priest, arrived in Utah nearly a century had passed since Fathers Dominguez and Escalante had led their famous expedition through the rugged Utah terrain. In the interim, the Catholic history of Utah was only lightly speckled with visits by traders, explorers, and missionaries of that faith, none of whom cared to make the region their home. Even as late as 1869 Father Honore Bourion, who was sent to Utah Territory to serve as its resident pastor, complained of spiritual isolation and asked for a transfer claiming he was “unable to make a living among the Mormons.” Other pastors with more tenacity followed, but it was not until 1873 that Father Scanlan arrived and with a determined strength created a permanent home for the Catholic faithful in Utah.

Scanlan was born September 28, 1843, on a farm near the hamlet of Ballytarsna in Ireland, to Patrick and Catherine Ryan Scanlan. The proud parents seemed to accept early in Lawrence’s life that he would grow up to be a “prince of the Church.” He began his study for the ministry in his early teens and eventually went to Dublin for instruction at the All Hallows seminary. He was ordained a priest on June 28, 1868, and after a short stay with his parents set sail for California, his field of choice for his future ministry. Within the California region Scanlan’s first independent appointment came as pastor of the Nevada mining camp of Pioche.

After proving himself capable in that tough and wild outpost, Scanlan became the natural choice to fill the void in the equally challenging mission of Utah. He arrived in Utah Territory on August 14, 1873, and assumed charge of the church of St. Mary Magdalene. It was the only church and Catholic institution in the territory, serving the nearly 800 members largely scattered among the region’s various mining camps. Father Scanlan immediately took action. With the help of an assistant priest he developed several mission stations spread over the area and through a fairly regular circuit visited the mining camps at Park City, Bingham Canyon, Mercur, Stockton, and Ophir at least once a month.

Bolstered by his progress, Scanlan soon requested Catholic sisters be sent to Utah to aid in the establishment of a school and hospital. Early in September 1875 St. Mary’s Academy opened on First West Street between First and Second South and within a year enrollment reached capacity. The sisters enjoyed similar success that fall when they founded Holy Cross Hospital in a remodeled residence on Fifth East between South Temple and First South streets. Even with the growth in Salt Lake, Scanlan refused to ignore the remote areas of the territory. He spent considerable time in southern Utah attending to the needs of miners at Silver Reef and even conducted high mass at the St. George Tabernacle in 1879. He expanded the church’s presence in Ogden, Park City, and Eureka and in 1885 began construction of a collegiate institute for boys named after his alma mater, All Hallows.

Perhaps, though, his crowning achievement and symbol of Catholic permanence in Utah was the construction of St. Mary Magdalene’s Cathedral (Cathedral of the Madeleine) on the corner of South Temple and B streets. On August 15, 1909, at a cost of $450,000, the majestic cathedral was finished and dedicated by Archbishop John J. Glennon of St. Louis. Following this culminating event Scanlan’s health began to decline and by 1913 he largely resigned himself to the care of the sisters of the Holy Cross Hospital. On May 10, 1915, in the presence of attending sisters, Scanlan raised his cross to his lips, kissed it, and peacefully died. Fittingly, in honor of his last request, he was interred beneath the sanctuary of St. Mary Magdalene’s, the cathedral he helped to build.