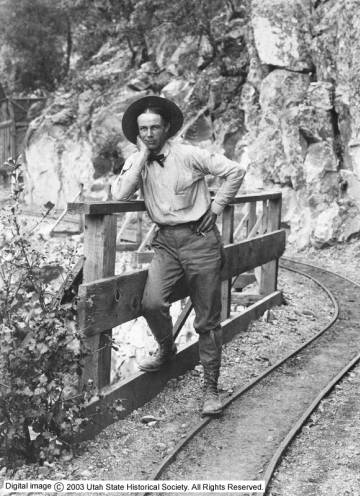 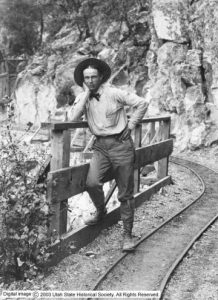 Charles Warner Lockerbie, shown here in 1905 when he worked as a traveling photographer, age 20.

Charles Warner Lockerbie was born January 7, 1879, near Mankato, Minnesota, to William and Belle Garrett Lockerbie. At age eleven he moved with his mother and sister to Salt Lake City to live with his maternal grandparents. Growing up near the Jordan River he developed an intense interest in its wildlife, especially birds. He earned a living first as a commercial photographer and later traveled widely as an expert wool buyer, but birds remained the center of his life.

His formal education ended with the eighth grade, however, he continued to learn throughout his life. A Salt Lake Tribune reporter quoted him in a 1956 article as saying, “My wife has gone without new dresses just so we could have more books on birds.” Most of these books, as well as his extensive field notes on birds, he later donated to the University of Utah. The depth of his study and field experience made him sought after by professional ornithologists from all parts of the United States, graduate students, and ordinary bird lovers. He wrote many articles on birds and mineralogy, another area of expertise.

In 1927 Lockerbie began to spend several afternoons or sometimes full days in the field each week. He systematically recorded what he saw in a small notebook. At the time of his death his notebooks contained some 40,000 entries and constituted what William H. Behle called, “an outstanding record of the kinds of birds occurring in the western United States, especially Utah….their relative abundance, the habitats occupied by the various species and the dates of arrival and departure of the migratory forms.”

Lockerbie was a charter member of the Utah Audubon Society, served four terms as its president, and in the 1950s was given the title of honorary president. He participated in more than 200 UAS field trips in addition to the countless excursions he and his wife made to all parts of Utah. He often escorted visitors to local birding areas.

For many years Lockerbie organized the annual Audubon Christmas bird count, an event that documents changes in the bird populations of the United States by sending birders out to identify and enumerate bird species in the same area year after year. In Lockerbie’s time the count encompassed a circle 15 miles in diameter with Temple Square as its center.

Expert birding requires a keen sense of hearing, Lockerbie said, for “Birds are first identified by their song.” He estimated that he could distinguish more than 300 different bird calls. During his years in the field he observed many birds rare to Utah, including a sabine gull and a golden plover.

An officer of the Utah Mineralogical Society and the Rocky Mountain Federation of Mineral Societies, Lockerbie taught a geology class in his home every Monday evening for eight years to interested neighborhood children and lectured extensively on mineralogy. He and his wife presented an 1,100-piece mineral collection to Westminster College in 1957. Over the years they assembled some 30 rock collections and donated them to museums and schools in Utah and as far away as Seoul, South Korea. Lockerbie’s interest in minerals and geology led him to study Utah mining, and he became an expert in the history of the Alta, Big Cottonwood, Park City, Mercur, and Ophir mining districts.