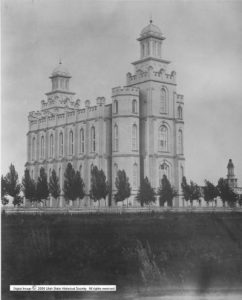 The Logan LDS Temple was dedicated in 1884. Its architect was Truman O. Angell, an LDS Church architect who designed many early Utah structures including the Salt Lake Temple.

Founded in 1859, Logan, a city of approximately 33,000, is located on the east side of Cache Valley in northern Utah at the mouth of Logan Canyon.

On 6 June 1859 a small group of Mormon settlers sent to Cache Valley by Brigham Young surveyed a fort site near the banks of the Logan River and began harvesting logs for houses. By the middle of the month, the first drawing for parcels of land took place. A second group plowed land and planted three acres of wheat on 10 June on an area called “the island.” They constructed two rows of cabins facing each other, patterning the settlement after Salt Lake City, including streets wide enough for several vehicles to pass each other. By March 1860 there were 100 houses in the settlement, which was named Logan after an early trapper, Ephraim Logan. The city was incorporated on 17 January 1866 and Alvin Crockett was elected Logan’s first mayor.

Though not the first white settlement in Cache Valley, Logan became the principal city because of its central location and its abundant water supply for mills and irrigation. Farmers and their families gathered there to buy and sell; industries grew to service the community. Eventually, Logan became the county seat for Cache County.

In November 1859 Mormon apostles Orson Hyde and Ezra T. Benson installed William B. Preston as bishop of Logan. That winter the citizens built a schoolhouse which doubled as a meetinghouse for the seventeen families of the settlement. The founding settlers included John B. and Aaron D. Thatcher, W. B. Preston, George L. Farrell, Thomas E. Ricks, and their families. The Thatchers developed a family empire in Logan . . . including business interests in banking, merchandising, manufacturing, mining, building of railroads, and commerce. In the spring of 1860, the Thatcher patriarch, Hezekiah, brought the first assortment of general merchandise to the city.

Other early industries in the town consisted of a sawmill, a lime kiln, a tannery, and a carding mill. Of course, agriculture formed the basis of the local economy.

In the winter of 1865 work began on the Logan LDS Tabernacle but was halted for a time while some church leaders went on missions for the church. When work resumed, a new foundation of rock was put in, and the building was completed in 1878. Construction on the Logan LDS Temple began in 1877 and was completed in 1884. These two buildings remain as landmarks in the city. 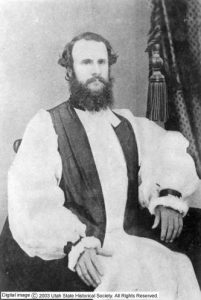 In 1873 Logan had 2,033 inhabitants. In that year, the Right Reverend Daniel S. Tuttle organized St. John’s Episcopal Church in the city. From that time on an active group of parishioners organized a school, established businesses, and participated in city government. They helped prepare the way for people of many religious faiths to settle in Logan. Higher education came to Cache Valley with the founding of Brigham Young College in 1878. Some ten years later, after the passage of the Lund Act by Congress, the Agricultural College of Utah, a land-grant institution, came into being; it opened its doors to students in 1890 with a faculty of eight. It was later known as Utah State Agricultural College, and is now Utah State University. Also in Logan, Bridgerland Applied Technology Center is one of five such schools in the state and trains 6,100 students in office, managerial, and technological subjects.

Logan is presently administered by a mayor and city council, and it is the center for county government. Its largest employer is Utah State University. There are more than sixty manufacturing industries located in and around Logan, including printing of business forms and yearbooks, exercise apparatus fabrication, the production of sewn products, wooden windows and doors, and cheese and meat processing plants. Logan also has many scientific research and computer firms. There are more than 200 retail outlets in the city.

Cultural endeavors include the Festival of the American West, Summerfest Art and Jazz Fair, Old Lyric Repertory Theatre season, the Summer Concert Series, AVA Holly Faire, and the Capitol Arts Alliance, which is housed in the historic Capitol Theater on Main Street. Many museums provide talented local artists space to display their works.

The elevation of Logan is 4,775 feet, producing cold winters and cool summer nights. The nearby mountains, streams, and valleys offer sites for fishing, hunting, skiing, four-wheeling, hiking, and snowmobiling opportunities. Since World War II, Logan’s population has nearly doubled from 16,832 in 1950 to 32,762 in 1990.