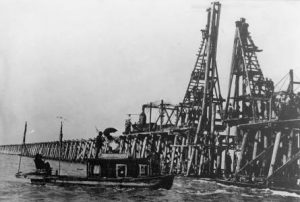 Driving the last pile in the original permanent trestle, October 12, 1903

When the railroad came through in 1869, the two rival companies, the Union Pacific and the Central Pacific, built their tracks around the north end of Great Salt Lake, because the lake was in a high cycle, and technology was not up to the task of bridging the lake. In 1898 Edward Henry Harriman acquired control of the Union Pacific Railroad, and three years later in 1901 he gained control of the Southern Pacific—successor to the Central Pacific. His modernization of the line included a technological feat of magnificent proportions.

The cost of helper engines and their facilities for pushing trains over the Promontory range were high, and Harriman decided it was time to revisit the possibility of building a bridge or causeway across the Great Salt Lake as “Traffic had increased to such a point that operation over the steep and crooked old line was becoming constantly more and more vexatious and difficult.”11 Financial and engineering heads came together, and the 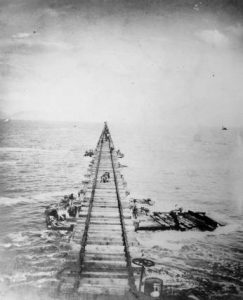 resultwas the great Lucin Cut-Off. The Lucin Cut-Off was 102 miles in length, from Ogden to Lucin, including thirteen miles of fill and nearly twelve miles of trestle across Great Salt Lake. Forty-four miles were saved in length, and hundreds of feet in grade. The project required the labor of 3,000 men, took one and one-half years of actual construction, and cost over $8 million.12 The cutoff saved considerable time and expense. Two difficult stretches were eliminated—the seven hundred foot climb in eleven miles across the Promontory Summit and the 500 feet crossing in five and a half miles of a spur of the Hogback Mountains near Kelton. 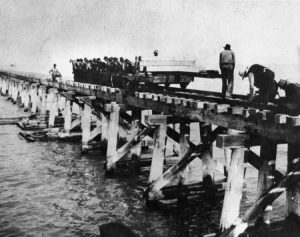 Laying rails on the Lucin Cutoff

It was a herculean project. Not only did a mountain of earth and rock have to be blasted, excavated, loaded, hauled, and dumped along the twenty-two mile length of the causeway, a huge forest of trees had to be located, cut, planed, hauled, and driven into the bed of the lake in its deepest part—nearly twelve miles of it—by steam-operated pile-drivers. A temporary trestle had to be built to support the dump-cars for the fill portion. A 1906 account described the complex project in the following manner: “In the construction of that trestle, piling one hundred and twenty-five feet long was to be used. In the main roadway bents were to be of five piles, at sidings of nine. These bents are fifteen feet apart, so that something like twenty-five thousand of these huge piles had to be obtained. They were mostly Oregon fir, and cost, delivered at the lakeside, about sixty dollars apiece. But there was also a temporary trestle to be built—many miles of it. In constructing the fill, a trestle was first made, on which a track was laid. Over this track trains loaded with rock and gravel for the fill were run out and dumped. In the shallower places this temporary trestle was of forty-foot piles, but in the deeper water approaching the permanent trestle seventy-foot piles were used. In the temporary trestle only four piles were driven in a bent, but the bents were the same distance apart as in the permanent trestle. Thus for the two trestles a perfect forest of piles was needed. The agents of the Southern Pacific scoured the great timber districts of the country, and train-load after train-load of the huge timbers was headed toward the Great Salt Lake. And piling was far from all. There were the big stringers and caps for both permanent and temporary trestles, and besides all the rest, though a bagatelle compared with it, timber for stations, boarding-houses, and sidings, guard-rails, and even a steamboat.”13

In all, “38,256 trees were cut down to make piles for the treat trestle. A forest of two square miles was transplanted into Great Salt Lake.”14 In addition 2 million board feet of redwood decking were used for the actual railbed. Just the portion of the trestle above the waterline contained enough wood to lay a board-walk four feet wide from Boston to Buffalo, or from Snowville to St. George.

The railroad company ordered twenty-five steam pile-drivers, which were built in San Francisco while the timber cutters were doing their work. Rock and gravel pits were opened at Little Mountain, Promontory Point, Lakeside, and at the southern end of the Hogup mountains. In the car shops, 400 special steel side-dump cars were built, each with a capacity of fifty-five tons. These were supplemented by other dump cars and flat cars for a combined total of nearly 1,000 cars used in the project. Eighty locomotives of various sizes moved the thousand cars. Eight great steam-shovels with five cubic yard buckets capacity dug the material out of the banks and loaded it into the dump-cars. A 127-foot long, 22-foot wide steamer, The Promontory, carried supplies and assisted with construction work on the lake. Construction occurred simultaneously at both sides of the lake and both sides of Promontory Point in the middle of the lake.

The pile drivers were the workhorses of the trestle. “As fast as the pile-drivers were ready, they were set to work. A station was erected at each mile-end of the projected road. There two pile-drivers went to work back to back, driving away from each other. Five bents of five piles each, or seventy-five in all, was a good day’s work.”16

It was hard work, and life in the construction camps was not glamorous. “At each station a boarding-house was built on a platform raised on piles well out of the way of storm-waves. There the men lived until their work was finished. The company furnished supplies and cooks, and the men paid four dollars a week for their board. They worked in ten-hour shifts, day and night, Sundays and holidays.”17 Nor were there many distractions for the workers. “There was not much to do but work and sleep, and there was no place to spend money. No liquor was allowed. All stores and all packages coming out to workmen were carefully searched, and any liquor found was promptly confiscated. From first to last two car-loads were taken in this way. The company was in a hurry, and it could not afford to have the work interrupted by drunkenness or sprees, to say nothing of the rows and fights inevitable if liquor were in camp. It was not so easy to keep it out on the fills as on the trestles. Two or three times squatters came down on government land adjoining parts of the right of way and set up groggeries. Usually it was not much trouble to drive them away, but one fellow who set up shop near Hogup determined to brazen it out. However, when one of the engineers took a gang of men to his place and began to drill holes under his shanty preparatory to blowing it up with giant-powder, his courage oozed, and he fled.”18

Workers were allowed to bring wives and children with them. They were housed in box cars called “out-fit” cars placed on temporary sidings. Some, such as a line of more than forty cars near the Lakeside quarry, were dangerously close to the construction work. At Lakeside, “sometimes, when blasts were unusually heavy, pieces flew uncomfortably near the outfit cars. So it was ordered that at the cry of ‘Blast!’ all the women and children should come out of their wheeled houses and crawl under them for safety.”19

The construction work was dangerous and minor accidents such as broken bones and smashed fingers and hands occurred. A car load of dynamite exploded and several men fell into the lake and were nearly strangled by the heavy salt water. The company maintained a hospital, staffed by a surgeon, near the work site.

The bottom surface of the lake bed ranged in hardness from gypsum-crusted sections “so hard that the huge hammers of the pile-drivers could not force a timber through, and it had to be cut out with a steam-jet.”20 In other places the bottom was more than fifty feet of soft mud where single piles disappeared out of sight and had to be spliced, lashed, and braced together in order to hold. The rock fill across these soft spots could also settle and had to be rebuilt. On 24 March 1903 a trial run was attempted by a train across the Old Bear River bed. Without warning the embankment settled. The engine, still on its rails but now in two feet of water, had to be pulled out with a cable.

In spite of these setbacks, work progressed steadily. When all the bents were driven, braced, and capped, twelve-inch stringers were laid, and three-inch-thick redwood planks were laid as a deck. Atop the planking, three inches of asphalt roofing were applied, and that capped with fourteen inches of gravel and rock ballast.

Freight trains began using the cutoff on 6 March 1904 and passenger trains began crossing the cutoff six months later on 18 September 1904. The benefits were immediate: “With six hundred thousand tons of through freight annually, and that amount increasing, the old road had reached its limit. It took three locomotives to handle nine hundred and fifty tons, and often required from thirty to thirty-six hours. Over the cut-off a single engine has hauled two thousand three hundred and sixty tons in less than nine hours. Passenger-trains that used to go in two or three sections, each with two locomotives, now run from fourteen to seventeen coaches with one engine.”21

Footnotes:
11 Oscar King Davis, “The Lucin Cut-Off: A Remarkable Feat of Engineering across the Great Salt Lake On Embankment and Trestle,” Century Magazine, Jan. 1906, 460. I am indebted to my friend Fred Cannon for a copy of the article. Mr. Cannon is the president of Cannon Structures, the company that is presently (1998) dismantling the trestle.
12 Ward J. Roylance, Utah: A Guide to the State, Revised and Enlarged (Salt Lake City: Utah Arts Council, 1982), 298.
13 Davis, “The Lucin Cut-Off,” 463.
14 Lydia Walker Forsgren, ed., History of Box Elder County (Brigham City: Daughters of Utah Pioneers, 1937), 34.
16 Davis, “The Lucin Cut-Off,” 465.
17, 18 Ibid.
19 Ibid., 466.
20 Ibid., 465.
21 Ibid. 468.
“Trestlewood: High Quality Douglas Fir & Redwood Materials,” brochure of Cannon Structures. According to Cannon’s calculations, “The trestle contains approximately 30 million board feet of Douglas Fir material (10 million BF in timbers and 20 million BF in piling) as well as about 2 million BF of Redwood material.”