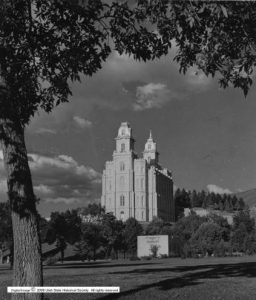 Manti is the county seat of Sanpete County, Utah. Manti, Utah, has a population in 1992 of approximately 2,000 people. It is situated in the Sanpete Valley of central Utah, at an elevation of slightly over 5,500 feet.

Manti was settled in late November 1849 by 224 men, women, and children. The group left the Valley of the Great Salt Lake on October 28. This, the first settlement south of Provo, Utah, resulted from a personal invitation from the Ute chief Walker in June 1849. He invited President Brigham Young of The Church of Jesus Christ of Latter-day Saints (the Mormons) to send a colony of his people to join the encampments of Chief Sanpeetch’s people already in the valley. Chief Walker and Brigham Young together are considered to be the founders of Manti.

The name “Sanpeetch” is uninterpreted. It may have meant or implied something to do with “red earth,” but the meaning as far as it can be interpreted today has been lost. The river that drains the valley is still called “Sanpitch,” but the name of the valley and the county has been modified to “Sanpete,” spelled in one word with the stress on the first syllable. 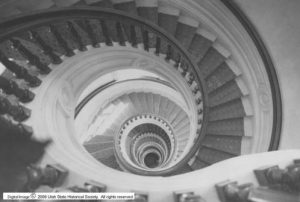 Brigham Young named the site “Manti” in the summer of 1850, at the request of the local patriarch Isaac Morley. The name was derived from that section of The Book of Mormon called Alma. Jesse W. Fox surveyed the plat for the “city” in the same summer, and Manti was incorporated in February 1851. The first mayor was Dan Jones, the so-called “Welsh prophet,” who was a native of Merthyr Tydvil, Glamorganshire, Wales.

A sizeable contingent of Danish converts to Mormonism arrived at Manti in 1853, to become the second largest ethnic group to settle central Utah.

The Walker War in the 1850s is believed to have been brought about because of Chief Walker’s anger that the Ute trade in Piute children with the Spanish traders from New Mexico was terminated by the territorial government. This followed the interception and arrest of a party of Spanish slave traders at the mouth of Salt Creek by a posse from Manti. A preliminary hearing was conducted at Manti, but the decision was made in the First District Court in Salt Lake City.

Three forts were constructed at Manti. The Little Stone Fort occupied the northwest quarter of block 64. The Log Fort was added to it on block 77, the block on which the Sanpete County Courthouse now stands. The Big Fort enclosed nine square blocks, which included the Little Stone Fort. It was erected in 1854. The center block of this fort was number 56.

The pioneer agricultural society at Manti lived within the town’s limits and traveled afoot, by wagon, or on horseback to their outlying farmlands. This pattern persists, but in 1992 farmers ride to their lands by pickup trucks. Although no longer a tactic of defense, the practice of not living on farmlands continues, partly as a matter of habit and partly for social and religious (church) reasons.

Pioneer subsistence agriculture soon gave way to the production of grain for the market. The end of Indian hostilities in the 1870s opened adjacent mountain rangelands during the summer for a range livestock industry, mostly large sheep herds. Hay production increased subsequently. As the settlement grew, poultry production for both meat and eggs also increased in importance. Turkey raising and processing began just prior to World War II, and have become major enterprises since 1947. Irrigation of all croplands is necessary because the climate at Manti is semi-arid. During the 1980s irrigation practices converted from the ditch-and-furrow to the more sophisticated sprinkler types, both in town and farmlands. Sewer lines and natural gas were also introduced in those periods. 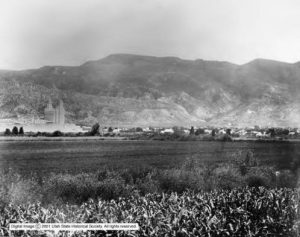 Between 1889 and about 1905 most Sanpete Valley towns experienced annual summer floods, which followed cloudbursts on overgrazed lands at elevations over 8,000 feet. In the 1890s the Manti City Council put into effect the political action that by 1903 resulted in the protection of its watershed by the federal Forest Service: the Manti National Forest.

The original settlers were of British stock, mostly Americans from New England and the Ohio Valley. Some arrived directly from Great Britain. In ensuing years emigrants arrived from Switzerland, Norway, and Sweden. 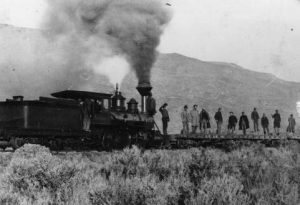 The first public transportation system into Manti was the Sanpete Valley Railway in 1880, from Nephi. This was a narrow-gauge rail line, which became standard gauge in 1896. The Denver and Rio Grande Western completed its line to Manti from thistle Junction in 1890, and extended its operations beyond Manti the following year. The D&RG purchased the Sanpete Valley Railway in 1910, and immediately abolished its section between Ephraim and Manti.

The last passenger train left Manti for Salt Lake City in 1949. The entire rail connection to and beyond Manti was abandoned with the dramatic floods of 1983 and 1984, which washed out Thistle Junction completely.

Manti’s connections with northern Utah today are by truck and private automobile along Highway U. S. 89 to Thistle, connecting with Interstate 15 at Spanish Fork. The other route follows the traditional pioneer trail along Utah Highway 128 to Interstate 15 at Nephi.

The most obvious cultural feature at Manti is the Mormon temple, begun in 1877 and dedicated in 1888. The Patten house (1854), constructed by John Patten of pioneer rubble rock, is a museum, a gift to Manti from the Utah State American Revolution Bicentennial Commission in 1976, with supplementary help from private donors.