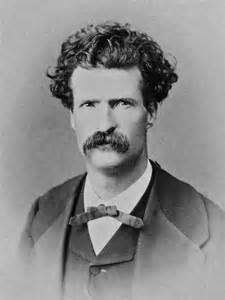 Mark Twain has been called the “Lincoln of American Literature” and with good reason. Nearly every school child has read his most famous classics set along the Mississippi River–The Adventures of Tom Sawyer, published in 1876, and The Adventures of Huckleberry Finn, which first appeared in 1884. However, an earlier book, Roughing It, published in 1872, contains a wonderful mixture of truth and tall tales of Twain’s journey to the West, which he began by stagecoach from St. Joseph, Missouri, in 1861. Traveling with his brother, who had been appointed secretary of the newly created Nevada Territory, Mark Twain stopped in Salt Lake City and wrote an engaging description of his entry into the Salt Lake Valley and humorous accounts of its people.

As the stagecoach reached the summit of Big Mountain fifteen miles east of Salt Lake City, Twain was much impressed writing, “…all the world was glorified with the setting sun and the most stupendous panorama of mountain peaks yet encountered burst on our sight. We looked out upon this sublime spectacle from under the arch of a brilliant rainbow.” Arriving in the city that evening, the two brothers found lodging in the Salt Lake House.

The next morning gave Twain an opportunity to take in the Valley of the Great Salt Lake and his awe was not diminished. He described the city as lying “…in the edge of a level plain as broad as the state of Connecticut, and crouches close down to the ground under a curving wall of mighty mountains whose heads are hidden in the clouds, and whose shoulders bear relics of the snows of winter all the summer long. Seen from one of these dizzy heights, twelve or fifteen miles off, Great Salt Lake City is toned down and diminished till it is suggestive of a child’s toy village reposing under the majestic protection of the Chinese wall.” The city itself he found to be very healthy and in one of his witticisms noted that there was only one physician in the city, and he was arrested every week on a charge of vagrancy since he had no visible means of support.

Their second day in the city, Twain and his brother visited Brigham Young. Twain found himself ignored by the Mormon leader, especially in his attempts to direct the conversation toward Young’s attitudes about Congress and politics. As the two brothers left, the elderly church president smiled at Mark Twain and patted him on the head, saying to the older of the two brothers, “Ah—your child, I presume—Boy or girl?”

Mark Twain took his revenge on Brigham Young with the best weapon at his disposal—his pen. He jabbed unmercifully at Brigham Young and the difficulties he had managing his extensive polygamous family. He wrote of the demands for equal treatment made when Young gave one wife a breast pin; the avalanche of demands that were unleashed when a stranger gave one of his children a tin whistle; and the 7-foot-long, 96-foot-wide bed that Young allegedly had built to accommodate all his wives.

The famous writer enjoyed his two-day visit to Salt Lake City, noting upon his departure that he and his brother were “hearty and well fed and happy—physically superb….”