During the 1950 campaign, fallout from McCarthyism and strident anti-Communism began to take its toll on Utah’s Democratic candidates. Subtle advertisements placed the Democrats and the American Communist Party on the same side of some issues, making it appear as though candidates Elbert Thomas, Reva Beck Bosone, and Walter Granger were Communist sympathizers. Wallace F. Bennett defeated Thomas, but Granger won his fifth term by defeating Preston L. Jones, and Bosone defeated Ivy Baker Priest.

On the strength of his successes in the 82nd Congress (1951-52), Granger decided to challenge Arthur V. Watkins for his Senate seat in 1952. He announced his candidacy before General Dwight D. Eisenhower threw his hat into the Republican presidential race, however, and he would later regret this move when the Republican party swept Utah, riding on the coattails of the popular army general. Once again, the in-state campaign was affected by the national climate of McCarthyism. Both Bosone and Granger were called “dupes of the Kremlin-controlled American Communist Party” as former congressman William A. Dawson challenged Bosone to regain his House seat.

The campaign against Granger was further muddied by charges of personal gain from taxpayer dollars. The charges, originally made in an American Fork newspaper column, were reprinted in a GOP ad prominently published in Utah newspapers the Friday before election day. The advertisement, which Granger denounced as an “infamous lie” and “the lowest example of dirty politics I have ever seen,” said that Granger was building a $60,000 home on his ranch near Cedar City (“Rancho Granger”) and that government funds had been used to drill a well, build the fence on the property, and reseed forty-five acres of his grassland. Weekend editions of the major newspapers carried Granger’s denial and demands for full retraction from the man who had taken a picture of the home for Watkins’s press secretary, from those who had prepared and inserted the ad, and from the publishers of the papers.

All the papers printed some kind of retraction like the following, which was buried deep in Section A in the Ogden Standard-Examiner on November 2, 1952, “This newspaper is now reliably informed that the Production Marketing Association did not drill a well upon the Granger farm. We have also read and considered Mr. Granger’s denial of the matter set forth in the article, that price of the house is $28,000 and not $60,000, that the PMA did not drill a well upon his property and that the Soil Conservation Service did not reseed forty-five acres of his ranch, and that the government did not build a fence around this property. The Standard-Examiner, therefore desires to retract statements which were set forth in the advertisement and denied by Mr. Granger, and we regret having published the statements.” The damage had been done, however, and it was small consolation to Granger that Watkins received 30,000 fewer votes than Eisenhower did in Utah; Watkins still won by 28,000 votes.

Walter and Hazel retired to their new home in Cedar City, but as the 1954 election drew near, a grassroots effort to get Granger to run again for his House seat began within the membership of the Weber County Democratic Party and culminated when he agreed to let the state Democratic party place his name on the ballot. 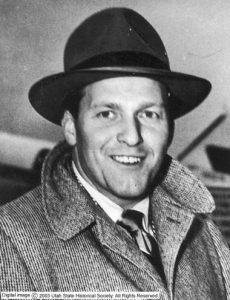 Weber was the home county of Republican Douglas R. Stringfellow, who had won the First District seat in 1952 largely through his stirring tales of heroism during World War II. Stringfellow had become paralyzed while serving with the U.S. Army Air Corps in France, but he began embellishing his war story as he retold it to Scout groups and young people’s gatherings until he had invented his participation in a dangerous Office of Strategic Services (OSS) mission behind enemy lines, an officer’s commission, and several faith-promoting incidents in which his life was saved. Not only did Stringfellow share his story at dozens of meetings but the stories were also repeated by Mormon church leaders and written into church lessons for young people, and he was honored by the U.S. Junior Chamber of Commerce as one of the top ten young men in America. His election to Congress in 1952 showed the strength of his popularity, but during the 1954 campaign his fabrication unraveled, and under pressure from the leadership of the LDS church and the state Republican Party, he confessed and withdrew from the campaign.

Before withdrawing, however, he had attempted to discredit Granger by implying that Granger had Communist sympathies and had failed to meet him in scheduled public debates. Granger resented Stringfellow’s false accusations and wrote him on October 4, 1954, “In as much as I have never engaged in mud-slinging in my campaigns, your appeal to keep the campaign clean was unnecessary. Also, in your letter as reported in the paper, but not in the copy I received, you make the statement that I had failed on two occasions to meet you in public debate. That statement is absolutely untrue. In view of this charge by you, are you really sincere in your appeal to keep the campaign clean…Along with our determination to keep the campaign on a high plane and not resort to mud-slinging and personalities, let us also resolve to be truthful in all things.”

Perhaps Granger was indirectly asking Stringfellow to be truthful about his war record. Granger had known for some time—perhaps as long as a year—that the war story was a fabrication, but he had no plans to expose Stringfellow. An expose was not his style, but it also could have backfired. In reviewing Stringfellow’s career, political scientist Frank Jonas wrote, “If anyone had dared to attack Stringfellow either on his war story or his veteran status, the anger of the electorate would have turned on the accuser and not on the accused…” The congressman had evoked considerable sympathy not only in Utah but also wherever he spoke across the nation.

Recognizing the situation, the Democratic Party had been gathering evidence of Stringfellow’s hoax for many months; members of labor unions and veterans’ organizations and a few newspapermen were also heavily involved. The party and Granger did not want to take the initiative to expose the congressman but were willing to assist others. Granger wrote to a Gunnison party member on September 13, 1954, “We have definite proof that Stringfellow’s heroic story is a fabrication of his own mind and he did not do the things he has taken credit for—I am giving you this information in order that you may be able to meet some of the arguments in his favor that you may run into.”

Granger’s insistence on campaigning on his own record brought him admiration from William W. Owens of Logan. In early October, Granger refused the opportunity to discuss Stringfellow’s war record in a public meeting. Owens wrote Granger, “You no doubt knew this complete situation when you declined to have it discussed at the Logan meeting. I congratulate you on being a man of such high principles. You have charity. You did not stoop to smear your opponent although a recital of facts is not a smear, but it would be intrepreted [sic] as such by the opposition. Your high sense of honor in this case should be additional proof that you are the best man to represent Utah in Congress.”

Evidence of the hoax was finally printed in the Army Times on Thursday, October 14, and the Democratic Party had 10,000 copies sent to Utah for distribution. However, Senators Watkins and Bennett and President David O. McKay of the LDS church intervened, and Stringfellow confessed on KSL-TV before the Times story could become the propaganda bomb the party desired.

It was less than three weeks before the election, and it would appear that Granger could easily win. However, the public did not realize that Stringfellow’s lies included those he had made against Granger, and his followers were sure that somehow the Democrats were responsible for Stringfellow’s fall. Dr. Henry Aldous Dixon, president of the Utah State Agricultural College, replaced Stringfellow on the GOP ticket. Granger had just sixteen days to campaign against Dixon. His strategy was described in a letter he wrote to Lloyd Ivie of Salina, “Your very interesting letter served to further convince me that we must hold the Republicans responsible for the Stringfellow blunder. Of course they knew the war story was a hoax but were willing to go along and carry him on their ticket so long as he could win. However, now we are faced with another candidate and a contrast to the other. Dixon is well known around these parts and he is highly respected. I am sure your approach—his qualifications as an educator as contrasted with my experience as a legislator—is the only weapon we can use.”

Public sympathy was with Dixon and the Republicans, however, and Dixon won. Hazel’s memoir claims that she and her husband had no regrets about losing the election, because they had no desire to return to Washington. Walter himself left no personal record of his feelings, but it would be hard to imagine that he was not disappointed to have his fine record as a congressman soiled and to have been rejected by the Utah citizens whom he had served so well. 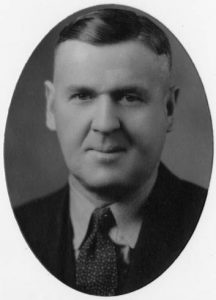 The Grangers retired to Phoenix in 1962. In 1966 the U.S. Forest Service appointed Granger to serve on its Federal Appeals Board, which settled disputes between the agency and individuals with grazing or timber permits. He served honorably for three years—from his 78th to his 81st year. In 1975 Walter K. and Hazel returned to the peace and quiet of Cedar City. In 1976 Granger was awarded an honorary doctorate degree from his alma mater, then Southern Utah State College. Although in 1909 he left without a diploma, he had become one of the school’s finest alumni. Two years later, on April 21, 1978, Walter Keil Granger passed away in Cedar City at the age of eighty-nine.

When the twenty-three-year-old Granger chose to pursue a life of public service, it is unlikely he ever dreamed it would lead him to the halls of Congress and to socials and councils in the White House. Throughout his career, he remained true to his own self-image described during his 1940 and 1952 campaigns: “Farmer and stockman, soldier, church man, legislator, Public Service Commissioner,” and “a conscientious and responsible public servant.” Although he rose from sheepherder to congressman, he never forgot his roots or his friends—“labor, industry, the unfortunate and aged.”