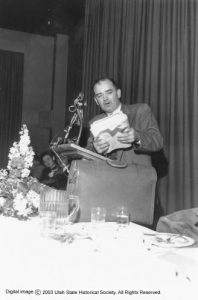 Historians date the beginning of the McCarthy era as February 9, 1950, when Senator Joseph R. McCarthy gave a speech in Wheeling, West Virginia, as part of a Lincoln Day weekend celebration. In that speech the junior senator from Wisconsin claimed to have a list of State Department employees who were members of the Communist party. The announcement catapulted McCarthy to center stage as America’s most aggressive foe of communists who, he claimed, had infiltrated the national government for the purpose of destroying the American political system and way of life. His unfounded and hysterical accusations, verbal abuse of witnesses, contempt for proper legal procedures, and attack on the loyalty—rather than the ideas—of those with whose policies he disagreed, led to the coining of a new word, “McCarthyism.” The process produced widespread hysteria that opponents and victims compared to the infamous Salem witch hunts of the 1690s.

News of Senator McCarthy’s visit to Salt Lake City was carried in the same issue of the daily papers that reported atomic scientist Klaus Fuchs had confessed to giving United States atomic secrets to the Soviet Union. A political cartoon in the Salt Lake Tribune tied the McCarthy and Fuchs stories together in a very dramatic way. The cartoon showed Uncle Sam sitting at a desk going over the national defense plans. A broom-riding witch has just swooped over the desk and gathered an armload of documents labeled “atomic secrets.” As she flies off she cackles “…and give my thanks to all the ANTI-witch hunters, Uncle..!” It was not, of course, the anti-witch hunters who had allowed Klaus Fuchs to give atomic secrets away.

Despite his repeated claims, McCarthy never did produce the name of any card-carrying communist, leading critics to claim that “Joe couldn’t find a Communist in Red Square.” The McCarthy witch hunts came to a close in 1954 when Utah’s Republican Senator Arthur V. Watkins chaired a U.S. Senate Select Committee that investigated McCarthy and recommended he be censured for his behavior.