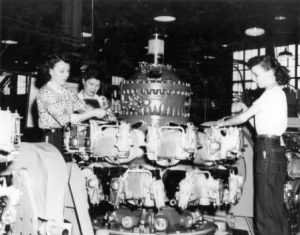 World War II brought four new military support installations to Utah and an expansion of the Ogden Arsenal, which had been operating since 1921. All of these facilities except the Tooele Army Depot directly impacted residents of Davis County. The Ogden Arsenal at Sunset, the Ogden Air Materiel Command area at Hill Field, and the U.S. Naval Supply Depot at Clearfield occupied land in Davis County. The Utah General Depot near Ogden was located in nearby Weber County. All of these facilities served as supply depots, and some of them provided maintenance and repair services. The military support zone in the Clearfield-Ogden area resulted in new jobs and increased populations during the war and a lasting impact on the economy and social makeup of the area.

The first of the depots established in Davis County was set up after the close of World War I. Investigators chose the Ogden area when they sought out inland sites that were close to railroads and highways. Opened in 1921, the Ogden Arsenal stored fifteen percent of the unused and obsolete ammunition left over from the war. The munitions were housed in large hollow tile magazines built on a 1,200-acre site east of Sunset; property formerly used as family farms. Over time, the facility languished. The Ogden Chamber of Commerce petitioned federal authorities in 1935 to reactivate the neglected depot to help relieve the impact of the Depression. The Works Progress Administration spent several million dollars building a new ammunition loading plant that employed a hundred workers beginning in 1938. During World War II, the Ogden Arsenal loaded small-caliber artillery shells and bombs and shipped all types of ordnance items plus vehicles, small arms, and artillery to various ports in the western United States. As the facility was expanded to accommodate its new wartime mission, employment mushroomed by 1943 to 6,000 civilians. With the close of the war, employment dropped to fewer than 1,500.

Hill Air Force Base (HAFB), originally known as Hill Field, was the site for the Ogden Air Depot, whose name underwent several changes until it became the Ogden Air Materiel Area. The depot’s original mission was to repair and maintain aircraft and provide supply services for the Army Air Corps. Launched in 1938 as a WPA project on a hilltop section of Davis County dry-farm land, by 1943 Hill Field was the largest employer in Utah. In addition to 6,000 military personnel on duty during World War II, the base hired 15,000 civilians, many of them from north Davis County, and put several thousand prisoners of war to work.

Like the Arsenal, the Ogden Air Depot at Hill Field was established through the encouragement of the Ogden Chamber of Commerce in an attempt to boost the local economy. The site was selected in 1935 and the first facility built by the WPA four years later. The chamber of commerce donated some of the land to make the project possible. Hill Field was named after Major Ployer P. Hill, who was killed in 1935 while testing a Boeing XB-17 “Flying Fortress” bomber at Wright Field in Dayton, Ohio. During World War II, the depot’s mission included repair of various aircraft and engines, parachutes, bombsights, and radios. As a supply depot, the installation shipped parts and equipment for airplanes. After the war, Hill Field became a storage facility for surplus materiel, including the B-29 Superfortress. It was during the late 1940s that the depot was renamed the Ogden Air Materiel Area (OOAMA) and Hill Field became Hill Air Force Base.

Though not as large or as lasting in their impact, two other depots contributed to the transformation of northern Davis County from an agricultural economy to one with a strong federal presence. During World War II, the U.S. Navy set up three inland supply depots to buy and ship equipment and supplies and handle the movement of personnel. The U.S. Naval Supply Depot at Clearfield managed this task for three West Coast ports serving the Pacific Fleet. In addition to managing an inventory of about 500,000 items, the depot distributed automotive and other materiel for selected activities in three naval districts stretching from North Dakota to Texas. Navy scouts chose the Clearfield site over Farmington because of its potential for expansion. When farm families opposed the loss of 1,600 acres of choice sugar beet and vegetable cropland, local government, business, and church leaders suggested other sites, including one near Woods Cross. The Clearfield site received strong support from the Ogden Chamber of Commerce, however. When the Navy stood by its original decision, Utah officials convinced the Clearfield farmers to sell for the economic good of the entire area.

The $37 million depot opened in 1943 with warehouses spanning nearly eight million square feet, plus a similar amount of open storage space. The depot soon counted nearly 8,000 civilian employees and an inventory valued at three times all the property of Utah. At its peak in 1944, the depot received 2.5 million tons of materiel in nearly 31,000 boxcars and shipped half that amount in an around-the-clock operation. Workers dispatched items such as clothing, general supplies, spare parts, hospital units, and electronics.

As World War II drew to a close, employment at the Naval Supply Depot was scaled back gradually. Closure was rumored in the late 1940s, but the base remained open. During the postwar years, the Clearfield depot warehoused and surplused unused materiel. In April 1946 the prisoner of war camp was disbanded and the men were returned to their homelands.

The fourth area military facility, the Utah General Depot, was built in 1941 to serve the U.S. Army. Later known as Defense Depot Ogden, the repository warehoused quartermaster supplies and shipped them to the war zones through ports on the West Coast. The site, known locally as “Second Street,” was located on nearly 1,700 acres of prime farmland near Marriott, northwest of Ogden. The facility was built with a small subsidy from the Ogden Chamber of Commerce and was expanded during World War II to accommodate an expanded mission. At its peak, the facility employed 4,000 civilians and 5,000 prisoners of war and was the largest wartime quartermaster depot in the country.

The depot’s eight original warehouses increased to twenty-eight during the war, with a total of five million square feet of enclosed space. Shipping 200 boxcars a day during the war, the storehouse handled more supplies than the other three northern Utah depots combined. After the war, the depot housed returned materiel for storage and disposal. It served during the Korean conflict, and then reduced its employment to around 3,000. During the 1950s, the depot became host to other government facilities, including some functions of the Ogden Arsenal and a service center of the Internal Revenue Service. With six million square feet of covered storage space available by the late 1960s, “Second Street” remained one of the largest supply depots in the nation and an important factor in the Weber-Davis economy.

The economic impact of wartime spending created a new prosperity unknown in Davis County since before the Great Depression. The most obvious boost was the creation of thousands of new jobs at the depots and thousands more in temporary construction work to meet the need for facilities, housing, and schools. Sunset, Clearfield, and Layton became “bedroom communities” to the military depots. In addition, the government and its employees purchased goods and services locally. Some farmland was sacrificed for military installations and housing in the northern region and for oil refineries along the county’s southwest border; even so, price supports and the demand for farm products increased agricultural income. Government controls and quotas were a continuation of the Depression-era programs of the Agricultural Adjustment Administration. During the war, the AAA’s Davis County office–renamed the Davis County Defense Board–set higher crop production goals in the federal “Food for Victory” drive. Local farmers generally approved of these actions because of the positive impact on profits.

Recruiting thousands of workers for the Davis-Weber depots was a challenging task, as there often was a need for additional help. Many of the resident civilian employees of the two-county region liked the security of government employment. Farming became a part-time occupation for many; for others a defense job was viewed as overtime work to supplement farm income. Most employees saw the work as a patriotic duty. Enlistment in the military had diminished the pool of available white men, so recruiters encouraged nonwhites and women to apply. The limited number of nonwhite residents in Utah led to recruiting outside the state. The Naval Supply Depot, for example, brought in more than 2,400 African Americans from the South. The depot also employed Native Americans recruited from New Mexico and Arizona as part of the federal bracero project. Japanese Americans who had been interned during the war hired on as well. Students commuted to the federal workplaces from as far away as Logan. Retired persons and people with physical handicaps also joined the work force. Nonwhite residents found that work was readily available not just in the defense installations but on the railroads and farms as well. Many of the new arrivals worked a combination of these jobs.