After Utah’s community leaders had convinced the Central and Union Pacific Railroads to build their stations and shops in Ogden rather than Corinne, the railroaders laid the track that spliced the capital and main business center at Salt Lake City into the transcontinental lines. Seven days after the joining of the rails at Promontory Summit, Brigham Young and a group of other community leaders broke ground for the Utah Central Railroad. After eight months of construction, on January 10, 1870, Young drove the last spike, made of Utah iron rather than of gold, and Wilford Woodruff offered the dedicatory prayer, completing the railroad link between Salt Lake and Ogden.

Utahns then laid ribbons of track that eventually unrolled through the rapidly urbanizing Wasatch Front and into the maturing mining districts. Like lava streaming outward from the central flow, railroads branched out from the Utah Southern to tap the rich mines of the Wasatch and Oquirrh Mountains. Workers completed the narrow gauge Wasatch and Jordan Valley Railroad to Granite at the mouth of Little Cottonwood Canyon by April 1873. From there, crews transshipped the granite blocks to construct the Salt Lake Temple. In 1875, the company completed the railroad to Alta and the famous Emma and Flagstaff Mines. From Sandy, workers built the Bingham Canyon and Camp Floyd Railroad in 1873 to tap the rich mines in the Oquirrh Mountains.

The completion of these railroads together with three other significant developments unleashed unprecedented growth in Utah’s mines. The other three ingredients in mining’s spectacular rise were (1) the introduction of technology from other territories and states and from foreign countries, (2) increasing investment in Utah mines from local sources, Great Britain, and American capitalists, and (3) cooperation from the Mormon community, which furnished food, transportation, labor, and–to a lesser extent–capital for mineral exploitation. 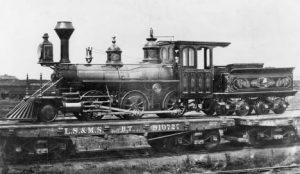 As interest in mining thrived, an absence of local crushers, mills, and smelters caused Utah entrepreneurs to use the railroad for shipping their most valuable ores to Baltimore, San Francisco, and even Swansea in Wales for processing. In June 1868, even before the marriage of the rails, the Walker Brothers hauled a load of high-grade copper ore from Bingham Canyon to the Union Pacific railhead at Uintah near the mouth of Weber Canyon. From there, they shipped it to smelters in Baltimore.

Business people soon recognized that the completion of the various railroads offered the potential for much higher profits if they could process the minerals locally since the metals were considerably more valuable than the ore bodies that mothered them. In 1870, the Woodhull Brothers built a lead-silver smelter on Big Cottonwood Creek south of Salt Lake City at what became Murray. Expectant business people constructed at least eighteen other furnaces in Murray over the next two years. These proved largely ineffective, however, because of the lack of metallurgical skill of the operators and the use of furnaces poorly suited to refine the local ores. Rossiter W. Raymond, a nationally acclaimed mining writer, said they were small, wasteful, and “run very irregularly.” Some, Raymond said, “seem to have run without any considerable profit,” and he found at least one had a “curios contrivance.”

In 1873, however, operators with greater technological skill began to raise more efficient smelters in Murray. Productive smelters required a great deal more than beehive shaped tubes put together with bricks and iron straps or even practical furnaces designed for other types of metals. Successful smelter operators imported refractories, which were bricks designed to withstand and control volcano like temperatures; charcoal; coke, which burned cleanly at high temperatures; and minerals that functioned as fluxes, which combined with impurities to free the valuable metals from the ore.

Various operators also ran crushers and mills to pulverize, reduce, and concentrate ores so the smelters could process them efficiently. By 1880, more sophisticated operations, which replaced the inefficient reduction works, furnished services at about thirty-four smelters and eighteen mills. Although operators constructed smelters in virtually all major mining districts, the central Salt Lake Valley towns of Murray, Midvale and Sandy, blessed with good water supplies and easy access to the railroad, became the favored sites for smelters.

Such operations required skilled metallurgists. Gold separated quite easily from its mothering ore since it did not combine readily with other minerals. Smelter operators found that silver, when combined with oxygen and carbon, was also relatively easy to separate. As the shafts probed deeper into the earth, the miners uncovered silver and lead in ores combined with sulphur. Smelter operators required more sophisticated metallurgical skills to recover the metals from sulphide ores.

By general agreement, the Germania Smelter in Murray was the most efficient and carefully run of the early operations. The smelter offered excellent service partly because of its personnel. The Germania’s employees included German emigrants Gustave Billing, accountant and smelter manager, and metallurgist Anton Eilers. Billing had arrived in Utah in 1870 to manage the smelter and take over the financial side of the operation. Eilers had studied at the University of Geottingen and the mining academy at Clausthal. After joining the staff of the Germania Smelter in 1876, Eilers gave two years of careful supervision before he and Billing moved on to Leadville, Colorado.

Technological improvements to mines, however, came at a cost and companies who adopted them read a sentence of injury, sickness, and death to their miners. Mechanical drills tore loose clouds of rock chips and silica dust that the miners inhaled. When lodged in the air passages and lungs, silica could block the intake of oxygen and leave miners gasping for breath with silicosis. Often called “miners consumption,” the disease attacked them three times as often as other people.

Rapidly moving mine cages menaced the miners more immediately. Riding on open platforms, the workers crowded together as they sped at 800 feet per minute past uneven and timber-studded rock walls. A fraction of an inch from death or dismemberment, they found that dizziness, fatigue, momentary inattention, or an inadvertent or malevolent jostle could rip or kill. After a fatal accident, bereaved friends often disentangled body parts from dozens of feet along the shaft.

Other dangers lurked in the tunnels as well: explosions resulting from poorly timed or defective fuses blew miners to pieces; rock dropping from late falls or inadequately timbered tunnels crushed them; water from poorly drained passages drowned them; explosions or fires that flared from gas, burning debris, uncooled machinery, sulphur, or (after the late 1880s) electricity burned or maimed them; methane or other poison gasses suffocated them; and many died or received injuries in the paths of wayward ore cars, picks, axes, shovels, or machinery. In the late nineteenth century, one of thirty miners suffered an injury, and 125 of every 1,000 died each year.  Most miners did not live long enough to expire from old age, and those who did often gasped for breath, battered beyond their years, with the wracking coughs of silicosis.

In the Rocky Mountains in the 1850s and 1860s, most miners dressed in heavy clothes to protect themselves from rocks, timbers, and tools. Most wore battered felt hats stiffened with resin that deflected light blows, much like modern plastic construction helmets. Most strapped oil lamps or candles to their foreheads for light. Some jabbed spikes holding lamps or candles into shoring timbers.

Underground crews started their ten-hour shifts with several jobs. Muckers cleaned up the loose rock from the blast that had wound up the previous shift. Miners then loaded the rock on cars and removed it from the tunnel. At the same time, the shift boss marked the whereabouts of the next blasts, and drillers began piercing holes into the rock face. These served as wombs for the explosion that would end the shift. These two jobs required great skill because profitability lay in loosening the greatest quantity of ore in the blast. This meant that ideally all the Bickford (named for inventor Cornishman William Bickford) fuses had to ignite the dynamite at the same time or in a carefully measured sequence.

Try as they might to maintain a clean, safe workplace, most miners smelled like sweaty mules well before the end of their shift. They used dirt-filled candle boxes to answer the calls of nature and relied on a dust-dulled sense of smell to signal danger. Some brought in birds to test for gas.

Living on the edge of death in the dark mines, they faced intense uncertainness out in the daylight as well. Nominally they received relatively high wages ranging from $3 to $4 per day in an age when American workers considered $500 per year an excellent income. Working on the edge of disaster, many mining companies went belly up, and when that happened miners could not collect their pay. Many miners’ families rode the roller coaster of boom and bust, moving to a promising job at a mining camp only to see the ore play out and the job end. Depressions like those from 1873–78 and 1893–97 reduced the market for minerals and led companies to discharge employees.

The difficulties miners had in collecting pay from some companies led to a citation by the Utah Territorial Legislature. An 1872 law gave miners legal title to wages earned, somewhat like current mechanics’ liens. Unfortunately, workers had to sue to collect their wages, and their usually meager resources often made that difficult.

Moreover, some companies exploited their employees mercilessly. Some superintendents required their miners to sleep in company boardinghouses and to buy their food and supplies in company stores. Many owed their souls to the companies, becoming little better than wage slaves in a Social Darwinist struggle for survival.

Battered by stress caused by family problems, employers, and technological change, miners tried to organize to regain control of their lives by bargaining as a group with the companies. In Utah, that proved extremely difficult. Perhaps 40 percent of the miners were Mormons, many of them farmers who took jobs during the winter or during slack season. They resisted joining unions for several reasons: they were often counseled against it by their ecclesiastical leaders, they experienced a great deal of antagonism with non-Mormon miners, and they perceived the mining job as an extra source of income rather than a lifetime profession. Non-Mormons, who made up perhaps 60 percent of the mining community, failed to present a united front on the union issue.