The Founding of Moab 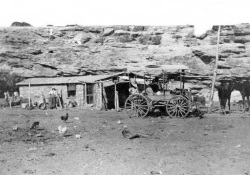 Moab is the county seat of Grand County and a regional center of southeastern Utah. It is located near the east bank of the Colorado River on the west side of the 12,500-foot-high La Sal Mountains in a valley fifteen miles long and three miles wide within the heart of the Colorado Plateau. Known variously as Grand Valley, Spanish Valley, and Mormon Fort, the biblical name Moab was adopted in 1880 when a mail route was established between Salina, Utah, and Ouray, Colorado. The first permanent settlers arrived in 1878–79; but before that date Native Americans, including the Sabuagana Utes, had long occupied the valley and used the nearby crossing of the Colorado River.

Even before settlement, the Moab area had a long and colorful history. Late in 1765 Juan Maria Antonio de Rivera reached the Moab area with an expedition sent north from New Mexico to reconnoiter the land on both sides of the Colorado River. Although other New Mexican traders probably used the crossing, their travels have gone unrecorded, and it is not until 1830, when the Spanish Trail was opened between Santa Fe, New Mexico, and Los Angeles, California, that the river crossing became of great significance.

In an unsuccessful attempt to control the crossing of the Colorado River and carry out missionary work among the Indians of southeastern Utah, forty-one men were called by Mormon leaders in April 1855 to establish the Elk Mountain Mission at present-day Moab. Traveling from Sanpete Valley along the Old Spanish Trail, the group crossed the Colorado River in mid-June and commenced construction of a rock fort. They remained until late September of 1855, at which time they returned to Sanpete Valley after Indian attacks destroyed their crops and left three men dead.

More than two decades later, in 1878, permanent settlers returned to Moab to establish farms and ranches. As the community evolved, a Mormon ward and a community school were established in 1881. Construction of the Denver and Rio Grande Western Railroad between Denver and Salt Lake City brought the railroad to within thirty-five miles of Moab at Thompson Springs and provided a much-desired railroad connection.

A ferry across the Colorado River was in operation by 1885. The first bridge across the Colorado, a three-span steel bridge, was completed in 1912. By the first decade of the twentieth century, Moab had developed as one of Utah’s finest fruit-growing areas, producing peaches, apples, and some grapes. Moab became the county seat when Grand County was created from portions of Emery and Uintah counties in 1890. Moab was incorporated as a town in January 1903 and became a third-class city in December 1936.

Although some mining was done along the Colorado River and in the La Sal Mountains, Moab’s economy was based on farming, ranching, and fruit growing until the uranium boom of the early 1950s brought in scores of prospectors, miners, workers, and speculators, increasing the population of Moab from 1,275 in 1950 to 4,682 in 1960. During the boom, the nation’s second largest uranium processing mill was completed just outside Moab in 1956, employing more than two hundred workers. The uranium boom brought new motels, cafes, stores, schools, and businesses to Moab.

Uranium was extracted from near Moab as early as the first decade of the twentieth century, and in 1911 the first attempt to drill a commercial oil well between Thompson and Moab was undertaken. Oil promised to enrich the Moab economy during the 1920s, but it was not until 1957 when three oil-producing fields were opened near Moab that something of an oil boom hit the area, a boom that lasted into the 1960s.

As the demand for uranium began to decrease in the early 1960s, potash became the most recent boom industry to hit Moab. A modern potash plant was built in 1963 and a railroad spur line completed from the Denver and Rio Grande Western Railroad at Crescent Junction to the Texas Gulf Sulphur Company mill outside Moab.

Arguably Moab’s largest industry, at least for the last quarter century, is the tourist industry. As early as 1906 the Grand Valley Times began promoting the tourism possibilities of the area, and in 1909 the Moab Commercial Club was organized to advertise the scenic attractions and recreational advantages of the Moab region. A significant boost to tourism came with the designation of Arches National Monument in 1929; however, the Great Depression and World War II brought few visitors to the Moab area. After World War II the river-running craze began slowly in the 1950s, gained momentum in the 1960s, and became a staple of the region’s tourist industry by the early 1970s. The establishment in 1964 of Canyonlands National Park, for which Moab serves as the northern gateway, was another milepost along the way to Moab’s becoming an important tourist and recreation destination. During the 1980s Moab, with its hundreds of miles of slickrock trails, gained worldwide fame as a mountain-biking center.

While the greatest number of Moab residents are members of The Church of Jesus Christ of Latter-day Saints, the community’s diversity is reflected in the significant number of other churches in Moab, including Assembly of God, Baptist, Catholic, Episcopal, Lutheran, and Seventh-day Adventist churches. By 1980, Moab’s population had reached a high of 5,333, but by 1990 it had dropped to 3,971. More recently, the population appears to again be on the rise as Moab increases in popularity and notoriety as a recreation destination.