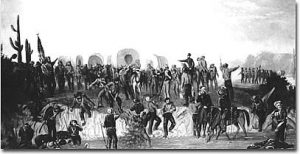 Painting of the Mormon Battalion by George M. Ottinger

In July 1846, under the authority of U.S. Army Captain James Allen and with the encouragement of Mormon leader Brigham Young, the Mormon Battalion was mustered in at Council Bluffs, Iowa Territory. The battalion was the direct result of Brigham Young’s correspondence on 26 January 1846 to Jesse C. Little, presiding elder over the New England and Middle States Mission. Young instructed Little to meet with national leaders in Washington, D.C., and to seek aid for the migrating Latter-day Saints, the majority of whom were then in the Iowa Territory. In response to Young’s letter, Little journeyed to Washington, arriving on 21 May 1846, just eight days after Congress had declared war on Mexico.

Little met with President James K. Polk on 5 June 1846 and urged him to aid migrating Mormon pioneers by employing them to fortify and defend the West. The president offered to aid the pioneers by permitting them to raise a battalion of five hundred men, who were to join Colonel Stephen W. Kearny, Commander of the Army of the West, and fight for the United States in the Mexican War. Little accepted this offer.

Colonel Kearny designated Captain James Allen, later promoted to Lieutenant Colonel, to raise five companies of volunteer soldiers from the able-bodied men between the ages of eighteen and forty-five in the Mormon encampments in Iowa. On 26 June 1846 Allen arrived at the encampment of Mt. Pisgah. He was treated with suspicion as many believed that the raising of a battalion was a plot to bring trouble to the migrating Saints.

Allen journeyed from Mt. Pisgah to Council Bluffs, where on 1 July 1846 he allayed Mormon fears by giving permission for the Saints to encamp on United States lands if the Mormons would raise the desired battalion. Brigham Young accepted this, recognizing that the enlistment of the battalion was the first time the government had stretched forth its arm to aid the Mormons. 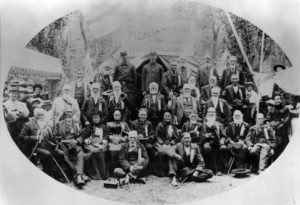 Headquarters Co. of the Mormon Battalion

The battalion marched from Council Bluffs on 20 July 1846, arriving on 1 August 1846 at Fort Leavenworth (Kansas), where they were outfitted for their trek to Santa Fe. Battalion members drew their arms and accoutrements, as well as a clothing allowance of forty-two dollars, at the fort. Since a military uniform was not mandatory, many of the soldiers sent their clothing allowances to their families in the encampments in Iowa.

The march from Fort Leavenworth was delayed by the sudden illness of Colonel Allen. Capt. Jefferson Hunt was instructed to begin the march to Santa Fe; he soon received word that Colonel Allen was dead. Allen’s death caused confusion regarding who should lead the battalion to Santa Fe. Lt. A. J. Smith arrived from Fort Leavenworth claiming the lead, and he was chosen the commanding officer by the vote of battalion officers. The leadership transition proved difficult for many of the enlisted men, as they were not consulted about the decision.

Smith and his accompanying surgeon, a Dr. Sanderson, have been described in journals as the “heaviest burdens” of the battalion. Under Smith’s dictatorial leadership and with Sanderson’s antiquated prescriptions, the battalion marched to Santa Fe. On this trek the soldiers suffered from excessive heat, lack of sufficient food, improper medical treatment, and forced long-distance marches.

The first division of the Mormon Battalion approached Santa Fe on 9 October 1846. Their approach was heralded by Col. Alexander Doniphan, who ordered a one-hundred-gun salute in their honor. At Santa Fe, Smith was relieved of his command by Lt. Col. Philip St. George Cooke. Cooke, aware of the rugged trail between Santa Fe and California and also aware that one sick detachment had already been sent from the Arkansas River to Fort Pueblo in Colorado, ordered the remaining women and children to accompany the sick of the battalion to Pueblo for the winter. Three detachments consisting of 273 people eventually were sent to Pueblo for the winter of 1846-47.

The remaining soldiers, with four wives of officers, left Santa Fe for California on 19 October 1846. They journeyed down the Rio Grande del Norte and eventually crossed the Continental Divide on 28 November 1846. While moving up the San Pedro River in present-day Arizona, their column was attacked by a herd of wild cattle. In the ensuing fight, a number of bulls were killed and two men were wounded. Following the “Battle of the Bulls,” the battalion continued their march toward Tucson, where they anticipated a possible battle with the Mexican soldiers garrisoned there. At Tucson, the Mexican defenders temporarily abandoned their positions and no conflict ensued.

On 21 December 1846 the battalion encamped on the Gila River. They crossed the Colorado River into California on 9 and 10 January 1847. By 29 January 1847 they were camped at the Mission of San Diego, about five miles from General Kearny’s quarters. That evening Colonel Cooke rode to Kearny’s encampment and reported the battalion’s condition. On 30 January 1847 Cooke issued orders enumerating the accomplishments of the Mormon Battalion. “History may be searched in vain for an equal march of infantry. Half of it has been through a wilderness where nothing but savages and wild beasts are found, or deserts where, for lack of water, there is no living creature.”

During the remainder of their enlistment, some members of the battalion were assigned to garrison duty at either San Diego, San Luis Rey, or Ciudad de los Angeles. Other soldiers were assigned to accompany General Kearny back to Fort Leavenworth. All soldiers, whether en route to the Salt Lake Valley via Pueblo or still in Los Angeles, were mustered out of the United States Army on 16 July 1847. Eighty-one men chose to reenlist and serve an additional eight months of military duty under Captain Daniel C. Davis in Company A of the Mormon Volunteers. The majority of the soldiers migrated to the Salt Lake Valley and were reunited with their pioneering families.

The men of the Mormon Battalion are honored for their willingness to fight for the United States as loyal American citizens. Their march of some 2,000 miles from Council Bluffs to California is one of the longest military marches in history. Their participation in the early development of California by building Fort Moore in Los Angeles, building a courthouse in San Diego, and making bricks and building houses in southern California contributed to the growth of the West.

Following their discharge, many men helped build flour mills and sawmills in northern California. Some of them were among the first to discover gold at Sutter’s Mill. Men from Captain Davis’s Company A were responsible for opening the first wagon road over the southern route from California to Utah in 1848. 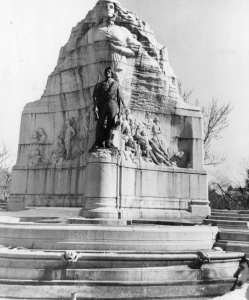