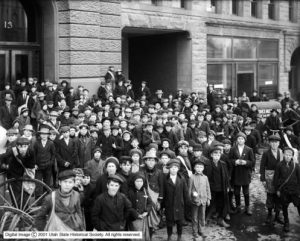 The sight of young boys selling newspapers on downtown Salt Lake City streets was a familiar one for much of the city’s history. As in cities all across America, the job of newspaper boy usually did not mean a set route with established customers who received the newspaper on their doorstep every morning or evening.

William Gould was one of Salt Lake City’s early newspaper boys. He began his newspaper career during the 1890s. Later he became a locomotive engineer, first for the Denver and Rio Grande and then the Utah Railway Company. His recollections give a fascinating glimpse into the thoughts and experiences of a newspaper boy a century ago:

“I have heard kids say that they could get two papers for five cents and sell them for a nickel apiece. I couldn’t believe this. Why would anyone give five cents for something that cost only half as much? The whole idea of profit didn’t make sense to me. When I got a nickel one afternoon I found my way up to the distributing office of the Deseret Evening News, right about where the Hotel Utah now stands. I bought two papers with my nickel. I was so surprised that I ran all the way home to show Mother. She asked me what I was going to do with them.  That was something I hadn’t thought about at all. She thought I should sell them. That seemed to be a pretty good idea. She suggested that a good way to sell them would be to go back up town with them. After thinking it over for a while I agreed. 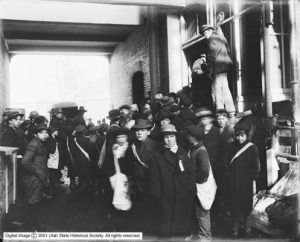 A group of newsboys waiting for their papers

“What a feeling came over me when I realized that I had doubled my money! I now had two nickels when before I had only one. Instead of getting more papers to sell, I again ran home to show Mother what I had done. But I gradually learned that the more papers I sold the more money I made.

“If you had a favorable place to sell your papers it was because you fought for it and were thereby able to hold it. If you couldn’t lick the guy who wanted your corner, you just moved off and hunted another place. I had very little trouble holding the northwest corner of First South and Main in the evenings, and the southeast corner in the mornings.

“As a rule I made very little money in the evenings–maybe twenty or twenty-five cents–unless something of singular interest developed. But in the mornings I very often made as much or sometimes even more than did my dad. There was a reason for this: I would be roused out of bed at 4:30 or 5:00 every morning. Mother would fix me a hot breakfast and send me on my way. In the winter she would bundle me up so that I would not feel the cold.

“Another reason for the favorable earnings in the mornings was that there were very few newsboys on the street that early in the morning. The market was divided between fewer sellers. I would meet the streetcars as they came out of the car barns and sell most of my papers to the streetcar men. If I had any left after the cars were all out, I would finish up at the corner of First South and Main. Then I would hike home and go to school.

“The Deseret News sold for five cents a copy. The Telegram sold for three cents a copy. That is, it was supposed to sell for that price. The only trouble was that we newskids always seemed to be out of pennies when it came to making change. Unless a customer presented three pennies in exact change he would usually wind up paying a nickel or going without his paper. It eventually got to the point where we refused to sell the paper for less than a nickel.

“The management of the paper soon got wise and started to clamp down on us. They refused to let us have papers unless we could show that we had a handful of pennies with which to make change. I think this rule was what caused us to organize the union. We boycotted the Telegram. If any kid showed up on the street with those papers, he had them taken away and torn to pieces by the goon squad. After a few days of this the Telegram changed its advertised price to five cents a copy.

“Our union did not survive for very long after our victory over the Telegram. I think when the novelty started to fade, so did the interest. Before it did, our union arranged for two kids to lead a big yellow dog between two lines of marchers during a Labor Day parade. This dog was carrying a placard on each side which read, ‘A yellow dog is better than a scab.’ I don’t think we kids knew the full meaning of that term. However, it went over big with the other labor organizations. The morning papers featured it as one of the highlights of the parade.”