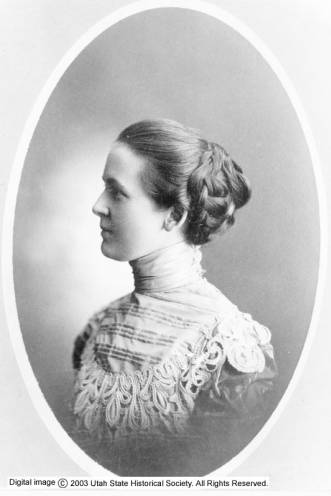 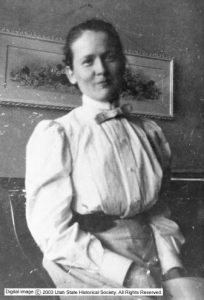 She came west as a telegrapher and became Utah’s cattle queen.

When Katherine Fenton Nutter died in Salt Lake City on July 17, 1965, at age 94, the Salt Lake Tribune called her “perhaps the last of the West’s cattle queens.” Whether she was the last of her breed is debatable; that she was indeed queen of a vast cattle operation is unquestionable.

She was born on March 12, 1871, in Ceylon, Ohio, to Maurice and Catharine Morgan Fenton. Educated at the Sisters of the Holy Cross School in South Bend, Indiana, she then came west to work as a telegrapher and eventually managed the Postal Telegraph Company’s office in Colorado Springs, a town that was booming because of mining activity in nearby Cripple Creek.

In 1905, when Utah’s Uinta Basin was opened to homesteaders, she entered her name in the lottery and the luck of the draw gave her a homestead in Ioka, Duchesne County. She headed for Utah to see her land, but a stagecoach driver new to the Price-Myton route missed the regular overnight stop. She and another woman spent the night at Preston Nutter’s ranch in Nine Mile Canyon. As William C. Barton noted in his reminiscence of the Nutter ranch, “all cattlemen keep ‘open house’ and any traveler is welcome to a night’s lodging and his meals,” a tradition later maintained at the Nutter ranch by Katherine.

Although she ran the telegraph office in Colorado Springs for three more years, she also spent the time required by homestead law on her Ioka land. In traveling back and forth to Ioka, she and Preston Nutter, whose ranching operation covered large areas of Utah and Arizona, developed their accidental acquaintance and married on November 28, 1908. They had two daughters, Catharine and Virginia.

Katherine learned large-scale cattle ranching from her husband during the 27 years before his death. She also kept the ranch account books and wrote the checks for the business. Widowed in 1936, she became president of the Nutter ranch corporation and assumed its management. 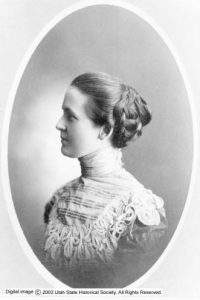 County, at the end of the fall cattle drive. She was there at the railhead to inspect her stock before it was loaded on cattle cars for shipment to market on the Denver & Rio Grande Western Railroad, and, Young wrote, “She pronounced the condition of the grass-fat animals to be excellent.” She called the life of a rancher “one demanding a great amount of self-denial from those who would follow it and was strong in her praise of the men who handle her stock…. She told of the heroic night-and-day struggle of the past winter to keep the cattle alive during… the deep snow and cold weather.”

Katherine evidently never forgot her telegraphy skills. On one occasion when she was ordering railroad cattle cars, a friend recalled, “She overheard the telegrapher rattling off an order for the cars in [Morse] code, stopped him and said, ‘I ordered cattle cars, not sheep cars.’ The surprised telegrapher realized she had read his message as fast as he sent it and had caught the error.”

A member of the American Cattleman’s Association, the Utah cattle queen supported the Taylor Grazing Act, served as an early adviser to the Utah State Big Game Control Commission, and was active in the Catholic Women’s League.