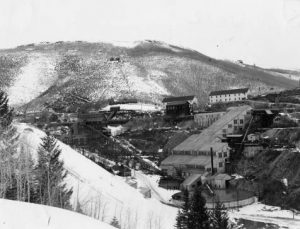 The Park City Mining District comprises a tract that lies between the steep wall and ledges that mark the crest of the mountain range on the west and the mountain meadows of Heber, Kamas, and Parleys Canyon along the eastern foothills. Some thirty miles southeast of Salt Lake City, Park City is situated on an intermediate belt that sits upon a spur which extends from Dayton Peak, in the main range to the east, and which forms the head of East Canyon, divides the Weber from the Provo river, and is the link between the Wasatch Range and the Uinta uplift. It is located in Summit County.

On 23 December 1869 the Young American lode became the first recorded claim of the district. However, it was the discovery of the rich Ontario mine that initiated efforts to mine lode ores and acted as the catalyst for Park City’s rapid growth and reputation as a great silver mining camp. In 1872, shortly after its discovery, the mine was sold for $27,000 to George Hearst of San Francisco, and was run by R. C. Chambers until 1901. It reportedly produced some $50,000,000 of ore. The Pinon, Walker and Webster, Flagstaff, McHenry, Buckeye, and other area mines also shipped small amounts of ore. By 1879 the Ontario mine was flourishing, with houses springing up near the mine and lower down the canyon—the site of Park City.

As a camp began to form, primarily with wooden structures erected to service the growing population, a fire destroyed several of its principal buildings in December 1882. In 1884 Park City incorporated as a city. In August 1885 another fire claimed another building.

Mining operations continued to develop in the late 1880s and early 1890s. In 1885 John J. Daly formed the Daily Mining Company, and later the Daly West. The Daly-Judge (John Judge) Mining Company was formed in 1901, and consolidated its holdings in 1902. In 1892 David Keith, W. V. Rice, Thomas Kearns, A. B. Emery, and John Judge acquired a lease on the Mayflower claim; while working the interior they found that it extended into Silver King property. The Silver King Mining Company soon was incorporated for $3,000,000 and the well-managed property quickly attained high ranking among bonanza silver and lead mines. Park City boomed, and personalities such as the Silver Queen (Susanah Bradford Emery Holmes) added to the city’s style and lore.

The Panic of 1893 slowed economic growth, but Park City’s expansion was decisively halted by a devastating fire. On 19 June 1898 fire raged through the Park City commercial district. The blaze was the greatest in Utah history. Main Street lay in ruins, with only a few gaunt walls remaining. Losses were estimated at over $1,000,000, and some 200 business houses and dwellings perished. With community support, however, the town rebuilt, replacing stone and brick structures with wood buildings, which were later improved again to brick and stone.

Commercial activity flourished in Park City. Utah business directories reveal that in 1892–93, 112 businesses (including physicians and lawyers, but not mining companies) were listed; while in 1903–04 approximately 136 concerns operated in the town. By 1918–19 the number had declined to 87; and in 1920–21 only 75 such entries were listed. As elsewhere, the Great Depression of the 1930s halted development.

Political activity and public life in the city were embodied in City Hall, quickly rebuilt after the 1898 fire. During the Great Depression of the 1930s, the WPA erected the War Memorial Building that served the recreational needs of the community. Social halls, saloons, and theaters all marked life in Park City. The Odd Fellows, Elks, and Masons contributed to the town’s social life.

Mining activity slowed greatly because of various depressions. By the 1950s Park City was almost dead; but due to the increase in winter recreational activity (especially skiing), the town experienced a rebirth in the 1960s and thrives as a key resort town in northern Utah and the West. The Deer Valley area was added to Park City’s development in the 1980s, and has added to its reputation as an excellent winter skiing area, as has also Park West resort. In 1976 Park City’s local government passed a Land Management Code, delineating historic districts and instituting preservation ordinances. In 1978 the Park City Main Street Historic District was listed in the National Register of Historic Places. Other listings followed as the historic character of Park City was viewed as a key element in the town’s colorful past and part of its attraction for the future.