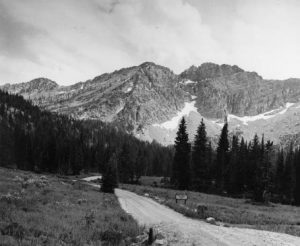 Centrally located in the Intermountain West, Utah is bordered by all of the mountain states except Montana and is often called the “Crossroads of the West.”

The state’s centrality is important to the prosperity of the Wasatch Front, Utah’s core area, and particularly to the Salt Lake City metropolitan area. The term “Salt Lake Empire” refers to the large geographical area that comes under considerable economic and/or religious influence from Salt Lake. The empire penetrates significantly into Idaho, Wyoming, and Nevada, somewhat in Arizona, and is not of much consequence in either New Mexico or Colorado.

At 84,916 square miles or 54,340,240 acres, Utah is the thirteenth largest state in the United States. Approximately three percent of the surface is covered by water.

Rising to 13,528 feet, Kings Peak is the highest spot in Utah, and Beaver Dam Wash in the southwestern corner of the state is the lowest point at 2,350 feet. Only the Uinta Mountains have peaks that exceed 13,000 feet, and

there are twenty-four of them that do. Three other mountains systems have

Utah’s landform is divided among three major physiographic provinces: the Great Basin or Basin and Range province, the Colorado Plateau province, and the Rocky Mountain province.

The largest of the provinces in Utah is the Colorado Plateau. It has been described as a land of layered, flat-lying sedimentary rock. The story of the earth’s movement and history can often be read in the tilt and erosion of the layered strata. Within Utah’s portion of the Colorado Plateau are five national parks, six national monuments, a national recreation area, and several state parks. It has one of the largest deposits of hydrocarbons in the world–coal, oil, oil shale, tar sands, gilsonite, and natural gas. It also has significant amounts of uranium.

Water is the most important agent for change within the Colorado Plateau. The Utah section of the plateau is drained by the Colorado and Green rivers and their tributaries. The plateau’s varied exposed surface materials can be spectacular in appearance. Utah’s portion of the Colorado Plateau can be further divided into the Uinta Basin, Canyonlands, and High Plateaus subprovinces.

It is believed that the mountains of the Great Basin are fault-block in origin, the same as the Wasatch Mountains and the Sierra Nevada that border the Basin. The mountains have formed along a generally north-south axis and they have valleys or basins separating them. Both the mountains and the basins tend to be from about 25 to 50 miles long and from 15 to 20 miles wide. Many of the basins are self-contained, meaning that they drain internally and are areas of water and soil accumulation.

Of the three major provinces, the physiographic province that covers the smallest area in Utah is the Rocky Mountains, which is divided between the Wasatch and the Uinta Mountains. This province is particularly valuable to the state for the water, recreation, and minerals it provides.

The Wasatch Mountains follow a north-south axis from the Idaho border southward to Mount Nebo near Nephi. They are a fault-block range that is structurally similar to the mountains of the Great Basin. Water from Wasatch streams has been essential to the settlement along the base of the range throughout recorded history.

The Uinta Mountains are one of the few east-west ranges in the Rocky Mountains. Unlike the fault-block mountains of the Great Basin and the Wasatch, the Uinta Range is a folded anticline bordered by the Uinta Basin to the south and the Green River (or Wyoming) Basin to the north. The Uintas offer excellent recreational opportunities, but they are not as heavily used as the Wasatch Mountains because they are more distant from population centers.

While Utah is widely perceived to be a desert state, and statistically it is the 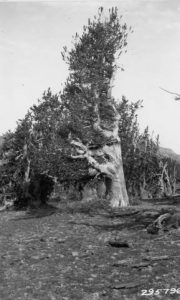 second driest state in the nation, its climate, soils, and vegetation are as diverse as are its landforms.

Utah has three climatic regions–humid, sub-humid or semi-arid, and arid–and each region covers about one-third of the state. The high mountains and plateaus are humid; the lower basins, valleys, and flatlands are often arid; and the transitional places in between are sub-humid to semi-arid.

While most of the moisture in Utah is associated with frontal systems from the Pacific Ocean, there is a period in mid- to late summer when convectional rainfall is very important, particularly in the southern and eastern parts of the state. During this time, moist air masses from the Gulf of California or the Gulf of Mexico periodically enter the state. The moist air is unstable and convectional processes frequently cause cloudbursts and flash flooding. The heavy convectional precipitation tends to be localized, but in the narrow canyons of southern Utah the danger of flash floods is high both from local cloudbursts and from heavy downpours that might fall many miles upstream.

Earthquakes and landslides are the two most serious landform-related natural hazards in Utah, whereas floods, wind, fire, and avalanches are the most prominent weather-related ones.

Earthquake danger in Utah is high because of the large number of faults located in the state. The most significant of them from a natural hazards perspective are whose slippage would affect the more densely populated areas of the state. This makes the Wasatch Fault easily the most dangerous of all because it is located near where the majority of the state’s people live and work. The Sevier Fault has had more earthquakes of a higher intensity than the Wasatch Fault, but it affects fewer people.

An earthquake associated with a major movement of the Wasatch Fault would cause great damage along the fault line. However, it might create even more destruction in the valley below because of what is called “liquefaction” of the earth. Liquefaction would occur if the shock of a major earthquake caused the groundwater along the Wasatch Front to mix with the Lake Bonneville-deposited alluvial soils in such a way that the soils would lose their ability to support structures. This is what caused the devastating damage of the Mexico City earthquake of 1985. Both Mexico City and the valleys of the Wasatch Front are located on old lake beds.

Landslides and mudslides received much attention during the above-average precipitation period of the 1980s. There were many such slides, and a few of them were among the largest recorded in North America. It was reported that the Manti Canyon slide of the 1970s, and the Twelve Mile Canyon slide in Sanpete County and the Thistle slide, both in 1983, were respectively the fourth, fifth, and sixth largest landslides ever recorded in North America.

Avalanches, along with flash floods, are the primary weather-related killers in Utah. Almost every year snow avalanches claim several lives in the state, primarily in the Wasatch Mountains.

Possibly the worst possible scenario for a natural disaster in Utah would be a major earthquake when the ground in the valleys and on the slopes was wet. This might produce the maximum possible damage from shaking, liquefaction, and slides.

Land Ownership. Federal ownership accounts for 67 percent of the land in Utah, with another four percent included in Indian reservations. The primary federal landlords are the Bureau of Land Management (BLM), the Forest Service, the Department of Defense, and the National Park Service.

Private ownership claims 22 percent of the land, and the remaining seven percent is owned by the state.

Agriculture. Much of the naturally best agricultural land in Utah is along the Wasatch Front, but is not farmed. It is used for cities, suburbs, factories, shopping centers, roads, and highways. Agriculture cannot compete favorably with more lucrative land uses in this region.

Livestock dominates Utah agriculture because grazing is the best and sometimes the only reasonable agricultural use for huge areas of the state due to the climate, the landform, or both. Dry farming and growing fruit on benchlands are other ways farmers have accommodated to the natural environment.

The most important of the market-oriented agricultural activities is the dairy industry. There is some truck gardening to supply fresh produce to the local markets, but it is much less significant today than it was in the past. Turkey and mink growing are two prominent targets of opportunity products, while cotton and sugar beets were of historical importance.

People. Utah has one of the nation’s youngest populations, lowest deathrates, and highest birthrates. In recent years, however, both the birth and the fertility rates have declined sharply. Still, the state’s natural increase rate is among the highest in the nation and will probably continue to be so indefinitely.

The percentage of people classified as minority by the Census Bureau is low, at less than 10 percent, being well below the national average. People of Spanish origin comprise the largest of the census-enumerated minority groups, and blacks comprise the smallest. More than half of the state’s population claim English ancestry, which is the highest of any state in the nation. Scandinavian and German-rooted people are the next most numerous.