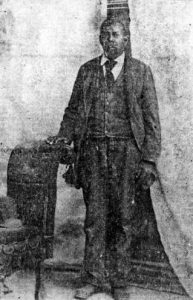 The names Green Flake, Hark Lay, and Oscar Crosby are inscribed on monuments and remembered by Utah school children as the three African American slaves who came to Utah with the first company of Mormon pioneers. Beyond that, most children and adults know little about the three men and even less about the free blacks, members of the James family, who also immigrated to Utah in 1847.

Green Flake was born in Anson County, North Carolina, ca. 1828. In 1841 he traveled with his owners, James Madison and Agnes Love Flake, to Kemper County, Mississippi, where the family cleared land for a farm. During the winter of 1843–44 Madison, as he was called, and Agnes were baptized as members of the Mormon church and so was their servant Green. When the Flakes decided to join the main body of the church in Nauvoo, Green accompanied them. For a time he served as a bodyguard for Joseph Smith.

According to historian Leonard J. Arrington: When Brigham Young organized the pioneer company in the spring of 1847, Madison Flake volunteered to send Green and his fine white ‘mountain’ carriage to carry the leader. Green was instructed to build a nice log house for the Flakes during the winter and have it ready for occupancy by 1848 when the family would begin the trek from the Missouri.

When Brigham Young became ill near the present Utah-Wyoming border on July 12, Green Flake—as well as Hark Lay and Oscar Crosby—joined a group of men under Orson Pratt’s leadership to find the best route through the mountains to their destination in the valley. They formed what is known as the advance company. Behind them were the main body of pioneers and a smaller group with the ailing Brigham Young.

The advance company proceeded down Echo Canyon, around Little Mountain, and through Emigration Canyon. The men used shovels, axes, and other tools to create a passable road for the main body of wagons to follow. Orson Pratt and Erastus Snow rode into the valley on July 21, and the following day, July 22, all of the immigrants, except Brigham Young’s small group, entered the valley. Plowing, planting, and digging irrigation ditches occupied almost every man, including the African Americans. Green Flake, as instructed, also built a home for Madison and Agnes Flake. Some sources suggest that Green accompanied Brigham Young east in the fall of 1847, taking the Flakes’ wagon and then returning to Utah with the family in 1848.

In 1850 Madison Flake went to California where he was killed in an accident. When his widow Agnes decided to go to California with the Charles C. Rich company, she left Green Flake in Salt Lake City to “work for the Church, as a way of paying the family’s back tithing.”

Arrington stated: Green worked for Brigham Young and Heber C. Kimball in a variety of capacities for a year or two, and then was given his freedom and a plot of ground at Union Fort, in the Salt Lake Valley….He thereupon married Martha Crosby and at Union, on the east side of 9th East, they grew garden crops, maintained an orchard, and bred fine livestock. They had two children.

Green probably developed at least a small herd of cattle, for he had his own registered livestock brand–his initials, GF, with a bar above them.

The log cabin on the left was reportedly built by Green Flake on his farm in Union. The other structures were built by a later owner. From Steven K. Madsen’s A Union, Utah History (1981)

Another account says that Green, Martha, and their son Abraham purchased some 20 acres of land in Union for $1,880 from James Godfrey ca. 1881. Although the Flakes raised much of their own food, Green also “worked for others who needed a good man. He was a big man, weighing nearly 200 pounds.”

The energetic Green may also have tried his hand at prospecting. Historian Ronald G. Coleman states that Green and his brother-in-law Miles Litzford (or Litchford), after limited success in the Bingham Canyon area, located several claims in the Big Cottonwood Mining District: Evergreen, Abraham Lincoln, Lake Cross, Union Blue, and Rainbow. Lack of capital to develop the claims led the men to sell out in 1871 to the Elevator Prospecting Company, one of two mining companies organized by blacks that year.

Green and Martha Flake were active members of the LDS ward in Union. In addition to tithing, he made donations to building funds for the Union Ward and the Salt Lake Temple. He was a good neighbor by all accounts, extending a helping hand without being asked. He was also noted for his fine singing voice. Some accounts claim that Green maintained the friendly relationship with Brigham Young that began on the overland trek and that when the pioneer leader died in 1877 Green helped to dig his grave.

Although children of African American descent could and did attend school alongside whites in Utah, territorial law prohibited blacks from voting and from serving on juries and in the legislature until the “free, white” qualification was deleted on February 5, 1868. The 1870 census shows four black children attending school in Union. Some half-dozen black families lived in the area, and Green Flake seems to have been the leading figure among them.

Sometime after his wife’s death in 1885, Green moved to Idaho to live with his son Abraham, until his own death on October 20, 1903. Both Martha and Green Flake are buried in the Union Cemetery. Arrington wrote:

An exciting event in Green’s later life was an invitation to attend the Jubilee Pioneer Celebration of the settlement of the Salt Lake Valley in 1897. One of the small handful of persons who were in the Pioneer Company who were still alive, Green was given a special certificate which he proudly hung in his home.

Much less is known about Oscar Crosby and Hark Lay. Both men traveled to Utah with a group of Mississippi Mormons that made a difficult journey from the South to Winter Quarters and then west with the first pioneer company in 1847. Like Green Flake, Crosby and Lay helped forge a road through Emigration Canyon and worked to establish the initial settlement in the Salt Lake Valley.

Oscar Crosby, born in Virginia ca. 1815, left Utah in the early 1850s with William Crosby, his owner, who was headed for the Mormon settlement at San Bernardino, California. Since California was a free state, Oscar could have claimed his freedom upon arrival there. He died in Los Angeles in 1870. Hark Lay (Wales is sometimes shown as another surname) was born in Mississippi ca. 1825. According to Coleman:

Hark Lay, the slave of William Lay, was married to a slave owned by either George or John Bankhead. William Lay was planning to move to San Bernardino and did not have the funds to purchase Hark’s wife. He attempted to find other solutions to the problem, but the record is unclear as to whether or not the couple were able to avoid separation.

Isaac and Jane Manning James and their sons Sylvester and Silas were the first free blacks to settle in Utah. They immigrated with the Ira Eldredge company, arriving in the Salt Lake Valley on September 19, 1847. Both Isaac and Jane had embraced the Mormon faith before they met in Nauvoo, Illinois. Jane and her brother had worked for Joseph and Emma Smith, and after the Mormon prophet’s murder she “resided in Brigham Young’s home.” She was living there when she met and married Isaac.

In the spring of 1848 the Jameses became the parents of Mary Ann, the first black child born in Utah. Coleman noted:

Like many early pioneers, the James family experienced difficult times and sought assistance from more fortunate neighbors, a consideration they returned by sharing their later good fortune. Slowly the family’s financial status improved, and by 1865, they were doing relatively well. In addition to a land claim and a home, they owned household items and a small number of livestock. Isaac listed farming as his occupation, but between 1849 and 1851 he also worked as a coachman for Brigham Young. Sylvester James was listed in 1861 [he was then about age 16] as a member of the Nauvoo Legion and was in possession of his ten pounds of ammunition and musket.

By the end of 1847, Coleman estimates, there were perhaps a dozen African Americans living in Utah. From that small number the black community would grow and change during the next century and a half. Although they shared the pioneering era with Euro-Americans and participated in Utah’s later development, African Americans faced difficulties and challenges unknown to most of their white neighbors. That they endured these with remarkable courage is their monument to the human spirit.