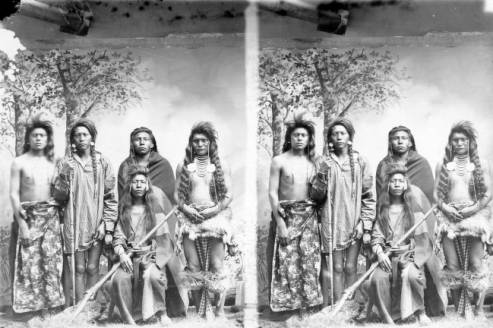 Chief Pocatello came to be known in the 1860s among Mormon leaders, Indian agents, and army officers headquartered in the Salt Lake area for his exploits as the head of a so-called outlaw band of Indians. Although the Shoshones under Pocatello’s lead did terrorize settlers and immigrant trains, such acts were largely retaliatory in nature and done in hope of securing equal and humane treatment. The encroaching whites had destroyed game and grass cover and had killed Pocatello’s tribesmen in wanton attacks.

Born around 1815 in the Grouse Creek region of present northwestern Utah, Pocatello was headman of his band of Shoshones by the time the Mormons arrived. As settlers began converting Indian ancestral lands into farms and the California gold rush led to increased traffic westward, Indians increasingly responded with raiding attacks. Pocatello’s band was blamed for the rise in violence along the California Trail, Salt Lake Road, and Oregon Trail. Brigham Young tried to appease Pocatello’s group with food and supplies, but the Indians grew ever more uneasy with the arrival of Johnston’s Army in Utah Territory in 1858. Pocatello’s band did raid and kill at times along immigrant trails, but in the chief’s mind the violence was provoked. In response, in January 1863 Colonel Patrick Edward Connor and soldiers from Fort Douglas set out to “chastise” the Shoshones. Pocatello and part of his people learned of the approaching troops and fled a day before Connor arrived. They thus escaped the infamous Bear River Massacre during which Connor’s men killed hundreds of Indians. Soldiers continued to pursue Pocatello, and the chief soon sued for peace.

Eventually, in the hope of decreasing the despair and hunger among his band, Pocatello consented to relocate to the Fort Hall Reservation in Idaho where the government promised relief. The $5,000 in annual supplies agreed upon rarely arrived, and the Indians continued to suffer.

In 1875, when news of George Hill’s Mormon missionary farm near Corinne, Utah, reached Pocatello, the chief saw an easy solution to his people’s hunger. Hill, with the help of Indian converts, had planted wheat, corn, potatoes, and garden vegetables. All that was required to receive assistance was baptism into the Mormon faith. In May 1875 Pocatello and his band traveled to Utah and requested baptism; the missionaries joyfully obliged. The influx of Indians did not sit well with Corinne residents, however, and townsfolk soon agitated for their removal. Federal troops responded and forced the return of the converts to Fort Hall.

Pocatello and many of his people felt betrayed and rejected Mormonism. They continued their struggle against hunger on the reservation. Pocatello withdrew from participation in reservation affairs and lived his remaining years in discontent. In October 1884 the chief died. According to his instructions, his body, along with his clothing, guns, knives, and hunting equipment, were bound together and tossed into a deep spring in southern Idaho. Eighteen horses were also slaughtered and rolled into the spring on top of the chief.