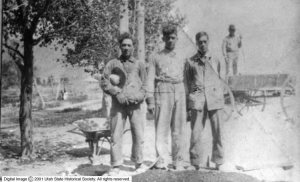 About 75 miles southwest of Salt Lake City in the semibarren expanse of Skull Valley the bronze bust of a Polynesian warrior rises as an anomaly out of the eastern fringe of the Salt Desert. The bust and the nearby cemetery are the only reminders of an even greater anomaly from Utah’s past—a colony of immigrants from Hawaii, Tahiti, Samoa, and New Zealand scratching out an existence in the Utah desert at the turn of the century.

Iosepa, (pronounced Yo-SEH-pa) the Hawaiian word for Joseph, was founded in August 1889 under the direction of then Mormon apostle Joseph F. Smith. The town’s colonizers were devout converts to the Mormon faith who came to Utah in order to build Zion and worship in the soon to be completed Salt Lake Temple. Certainly these tropical Polynesians were out of their element in the bone-dry desert of Utah and battled to adapt to the new climate, new language, and new foods, but in time they prospered and even made Skull Valley appear hospitable. On Arbor Day in 1899 they planted over 700 trees and shrubs, and during the initial stages of settlement residents installed a village water system, channeled a small stream from the Stansbury Mountains for irrigation, and developed a few natural springs to water their cattle. From their cooperative farming efforts they raised barley, hay, and livestock, with proceeds totaling near $20,000 in 1914. More important to the pious colonists, however, were their 77-mile treks to Salt Lake City. They made the pilgrimage as often as possible to worship in the temple, which remained their primary motivation for staying in Utah.

At its peak in 1916 Iosepa was home to 228 inhabitants, but despite its remarkable successes the colony was also plagued with hardships. The Polynesian settlers were not accustomed to the harsh Utah climate; they baked in the dry desert summers and shivered in the cold white winters. Such challenges took their toll, and at times it seemed that the cemetery grew faster than the town. A small outbreak of leprosy in the mid-1890s added to Iosepa’s difficulties. In all, only three colonists contracted the feared disease, but they were kept isolated from the rest of the residents in a barren shack well separated from town. The afflicted hoisted a flag on the pole outside their house when they needed provisions, and in this way the town cared for the lepers until they died.

In 1916 the Mormon church’s announcement of construction of a temple in Hawaii started a return migration among Iosepa’s colonists back to their homeland.  Despite their difficult life in Skull Valley it was a mournful departure for most of Iosepa’s citizens. In a show of solidarity Utah’s Hawaiian residents cried and sang as they walked to the train depot 14 miles distant. By January 1917 Iosepa was largely a ghost town, and over time the desert winds and desolation reclaimed the Polynesian village. Seventy-nine graves were the only lasting physical tribute to the colonists until their descendants and the Mormon church dedicated a monument in their honor in August 1989.