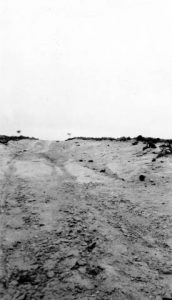 The Pony Express mail service between St. Joseph, Missouri, and Sacramento, California, was a short-lived business venture operated by the firm of Russell, Majors and Waddell. The firm was well known as a freighting outfit using the central route in east-west transportation, which followed the general path of present-day Interstate 80. For freighting, the company worked under the name of Central Overland California and Pike’s Peak Express Company.

Under the leadership of William H. Russell, the Pony Express system planned to relay mail carried by horseback riders. Each rider rode from 75 to 125 miles during a day or night run. Way stations, ten to fifteen miles apart, furnished fresh horses and whatever the riders needed. There were 190 stations between Missouri and California. The system was designed so that each rider changed horses at each station until his shift or segment was covered. The cost to send a letter was five dollars per ounce. The goal of the company was to carry the mail across the country in ten days, half the time established by stagecoach. Business leaders initially expressed enthusiasm when hearing the promise of improved mail service.

The Pony Express was inaugurated 3 April 1860 with high hopes for eventual government subsidy. The venture was a publicity success but a financial failure, lasting only eighteen months. Losses mounted to $500,000 before the books were closed. The ponies and their riders could not compete with the Overland Telegraph, which was completed on 6 April 1861.

The route crossed the Jordan River where the river cuts through the Transverse Mountains at Point of the Mountain. The route then went west to the south of the Oquirrh Mountains, to Faust, continued west, north of Vernon, and on to Fish Springs before crossing into the Nevada Territory.