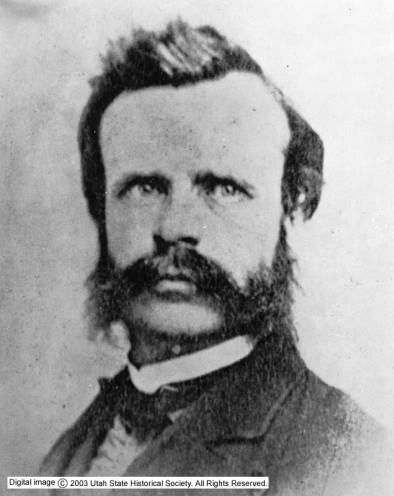 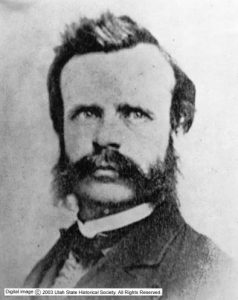 John Wesley Powell was born 24 March 1834 at Mount Morris in western New York state. His parents moved to Illinois, where he was educated at Wheaton and Oberlin colleges. He became interested in botany and geology at an early age, and began geological work with a series of field trips, including a trip the length of the Mississippi River in a rowboat; he also traveled the Ohio and Illinois rivers. In 1861 he enlisted in the Union Army and was commissioned a captain when he recruited a company of artillery. At the battle of Shiloh he lost his right arm at the elbow. He nevertheless returned to active duty and was promoted to the rank of major.

After his discharge in 1865, he was appointed professor of geology and curator of the museum at Illinois Wesleyan University at Bloomington. He later became a lecturer and curator at the museum of Illinois Normal University.

In 1867 he commenced a series of expeditions to the Rocky Mountains and the canyons of the Green and Colorado rivers. During his most famous expedition, from 24 May through 30 August 1869, he and his party made a daring nine-hundred-mile journey with four boats, traveling from the Union Pacific Railroad crossing of the Green River in Wyoming down through the Grand Canyon. He repeated much of the journey again in 1871 and 1872 to make a more thorough study of the Green and Colorado rivers.

In addition to his work in geology and botany, he studied the West’s Native Americans and their languages. He founded and was named the first director of the Smithsonian Institution’s Bureau of Ethnology, a position he held until his death. In 1879 the United States Geological Survey was organized and in 1880, following Clarence King’s resignation, Powell became the director of the survey, a position he held until 1894.

While Powell is most widely known as the first explorer of the Colorado River, he also made significant contributions as an administrator and as an advocate for conservation and careful planning in the use of western lands. He argued that because of their arid nature, western public lands should be classified as to their potential use for irrigation, pasturage, timber, and mineral or coal extraction. Powell also maintained that the traditional 160-acre farm as provided for in the Homestead Act was much too small for grazing purposes in the West. Instead, grazing farms there should be expanded to no less than 2,560 acres in order profitably to support herds.

His principal publications were: Exploration of the Colorado River of the West and its Tributaries (1875), which was revised and enlarged as Canyons of the Colorado in 1895; Report on the Geology of the Eastern Portion of the Uinta Mountains (1876); Report on the Lands of the Arid Regions of the United States (1879); Introduction to the Study of Indian Languages (1880); and Truth and Error, or the Science of Intellection (1898).

John Wesley Powell married Emma Dean in March 1862, and the couple had one child, a daughter, Mary Dean Powell, born 8 September 1871 in Salt Lake City. Powell died in Haven, Maine, on 23 September 1902 and is buried in the officers’ section of Arlington National Cemetery.