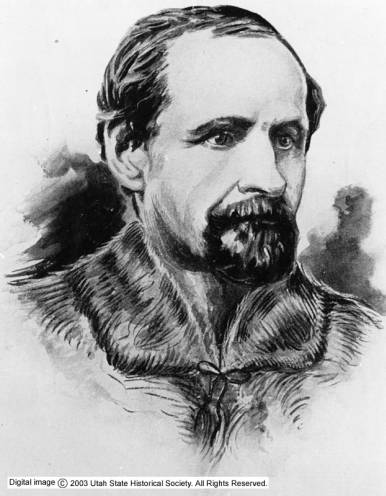 Although he does not have the wide recognition of Jim Bridger or John Colter, Etienne Provost was considered by his contemporaries as one of the most knowledgeable, skillful, and successful of the mountain men. Provost gave his name (phonetically) to the Provo River and the city of Provo. It seems likely that most of the early settlers of Provo were unaware of the bloody incident that gave the river its name. Provost’s contemporaries, however, knew of his skills and nicknamed him “the man of the mountains.”

Of French Canadian ancestry, Provost was born in 1785 in Chambly, Quebec. Around 1814 he became involved in the St. Louis fur trade, often trapping in what was still Spanish territory. Provost and his companions were twice captured and held prisoner by Spanish authorities. About 1822 he began operating out of Taos in present-day New Mexico. In 1824 he and his partner Francois Leclerc led a company north from Taos into the Great Basin. Some authorities claim that Provost may have been the first white man to see the Great Salt Lake—some months before Jim Bridger. In October the party was camped near Utah Lake (then generally known as Timpanogos Lake), probably along the present-named Jordan River. Provost’s men encountered a party of Snake (Shoshone) Indians. In his Life in the Rocky Mountains Warren Angus Ferris claims that a Shoshone chief known to the whites as “Bad Gocha” (from mauvais gauche or “bad left-handed one”) wanted to smoke the peace pipe with the Taos trappers. Bad Gocha claimed that it was bad luck to have metallic objects nearby, so Provost had his men set their weapons aside. At a signal, the Shoshones then attacked the whites, killing all but Provost and two or three others, who barely managed to fight their way out. The survivors made their way northeast over the Wasatch range.

The following spring Provost and his party met Peter Skene Ogden and members of his Hudson’s Bay Company trapping party on the Weber River, near present-day Mountain Green. Upon hearing the story of Provost’s narrow escape, Ogden wrote his superiors that he believed that the ambush may have been caused by the behavior of a Hudson’s Bay party of the previous year. Ogden reported that Alexander Ross’s company had stolen horses and furs from Shoshones and had killed one Indian.

Provost nearly got caught up in another fight, partly on account of Ogden. A party of American trappers encountered Ogden’s Englishmen in the Weber Valley, and an argument over trapping rights ensued—part of a much larger dispute about the ownership of the “Oregon country.” The American and English trappers each claimed the territory for their respective companies and nations. Author Jack B. Tykal points out that, in reality, only the bystander Provost had a legal right to trap in what was still Mexican territory.

Provost met William Ashley’s large trapping party soon after and helped to guide Ashley to the site of the first annual mountain man rendezvous at Henry’s Fork. Provost continued to work and explore in the American West out of St. Louis, although his active trapping days ended in 1830. He developed a reputation as a tough, resourceful man who also liked to drink and carouse. In 1839 he served as camp conductor for the Jean Nicollet party that mapped the country between the upper Mississippi and Missouri rivers. In 1843 Provost helped guide John James Audubon through the region. Although no photographs of Provost are known to exist, artist Alfred Jacob Miller painted members of the Nicollet expedition. Provost appears short, fat, and round; Miller captioned one picture “Monsieur Proveau, subleader, with a corpus round as a porpoise.”

In 1849 Mormon pioneers built “Fort Utah” on a Utah Valley stream that had generally been known as the Timpanogos. Mormons dubbed the river flowing between Utah Lake and the Great Salt Lake the Jordan, after the Holy Land river that connected the Sea of Galilee with the Dead Sea. Barney Ward, a mountain man who helped to guide the Utah Valley settlers, apparently told the Mormons that the Timpanogos stream was also called the “Provo.” Why the names got switched is unclear, but the October 1849 LDS Conference directed the establishment of the city of “Provo” on the river. The city’s namesake, meanwhile, still lived in St. Louis, unaware of the honor. Etienne Provost died there on July 3, 1850.