The fallout from this paranoiac witch-hunting rained deadly radioactive poison on the people of southwestern Utah as public officials prized a perverted interpretation of national security far above the lives of loyal and innocent people. Following World War II, the United States exploded atomic weapons at the Pacific islands of Bikini and Eniwetok; but in December 1950, President Truman authorized the AEC to conduct tests in the continental United States. The AEC selected the Nevada Test Site in southeastern Nevada because the federal government owned hundreds of square miles of surrounding desert land, and because it contained, in the contemptuous words of one bureaucrat, “a low-use segment of the population”—the Mormon citizens of St. George, Cedar City, and other sacrificial cities of southwestern Utah. For seven years between 1951 and 1958, the AEC aimed deadly radiation at soldiers stationed as close as 3.9 miles from the explosions and at the people of southeastern Nevada, northwestern Arizona, and southern Utah by detonating atomic weapons aboveground at the Nevada test site. After the United States ratified a Limited Test Ban Treaty with the Soviet Union in August 1963, the AEC continued to conduct underground tests, many of which erupted through the surface to again blanket Utahns with radioactive debris.

As evidence mounted of the deadly poisons these tests rained on the people of southwestern Utah, AEC officials induced their employees to lie about the danger. After establishing a ground-monitoring program in the spring of 1953, the AEC conducted a series of tests in the Upshot-Knothole series. In one of these tests—nicknamed “Dirty Harry”—a radioactive cloud lofted by the explosion hovered over St. George for more than two hours. Fallout reached levels far above those considered safe even by conservative AEC standards. Nevertheless, in an immoral cover-up justified by perverted appeal to national security, the AEC instructed its employees to release vague statements to the public and press. When humans and animals began sickening and dying, an AEC official told subordinates to keep quiet, “in the interest of national defense.” Following this directive, AEC officials falsified data from the St. George monitoring station to make it appear that the radiation could not have harmed anyone.

The people of Utah responded in various ways to the nuclear tests. Most generally, however, they affirmed their love of America and fear of Communist aggression. At the same time, they blanched in fear of leukemia, cancer, and genetic mutation. In the collective mood of McCarthyism and paranoia, the AEC played on the patriotism of southwestern Utahns like musicians on a finely tuned harp while they suppressed information that tended to show the carnage wrought by radiation. Self-justified, they conducted a feel-good, pro-patriotic, public relations campaign through motion pictures, school visits, briefings with influential citizens, interviews, and press releases.

Using the technique of the big lie, which was approved in writings about governmental policy as early as Plato’s Republic and dissected in George Orwell’s 1984, AEC officials suppressed medical studies that showed an increased incidence of leukemia and cancer from exposure to atomic radiation. Then, in addition to easing out scientists who refused to lie for them, AEC officials brought in “hired guns”—scientists motivated by a federal paycheck, personal loyalty, and patriotism—to prostitute themselves, like those hired by the tobacco industry, by commenting negatively on studies that showed links between atomic fallout and leukemia and cancer.

During the two decades following the open-air test, questions about public safety began to appear with disturbing frequency. Studies showed that the percentage of people in southwestern Utah who contracted leukemia and cancer exceeded the normal incidence of those diseases. Congressional committees raised further questions about the dangers of fallout while holding hearings about the results of the test.

Direct evidence that the tests could kill surfaced as early as 1953. Following one of the tests, a large number of sheep, which ranchers had left to graze downwind from the explosions, died. Most of the animals belonged to Cedar City ranchers such as Kern and Mac Bulloch. AEC employees monitoring the tests had given the Bullochs a perfunctory warning, but the ranchers had not really understood the danger to themselves or their animals, and they did not have the manpower to move their sheep from the path of the fallout. After the fallout had blanketed the sheep and grazing lands, the animals began to show such symptoms of radiation positions as burns, lesions, loss of wool, premature death, and stillborn and mutant lambs. AEC employees tried to steer the sheepherders from the real reason for the sheep deaths by arguing that they had suffered and died from malnutrition!

Unconvinced by the AEC cover-up, the Bullocks sued the federal government to recover the value of their lost sheep. The AEC won the case in 1956, in part by hiding information and producing witnesses who lied in depositions and who waffled under oath. In 1982, after learning of the abuse of his court, Judge Sherman Christensen, who had presided over the case, allowed the Bullochs and the other sheepherders to refile their suit. In the intervening years, the death and sickness of so many sheep plunged many of the ranchers into financial ruin, and a number had declared bankruptcy. Ruling that the AEC had perpetrated a “fraud”‘ on the court, Christensen condemned the federal officials in an opinion seething with righteous indignation. This all came to naught, since the Tenth Circuit Court of Appeals reversed Christensen’s judgment in a ruling explicable principally because of the conservatism of the court and because the judge who wrote it had previously worked for a firm retained as counsel by an agency of the AEC.

In the meantime, Scott Matheson, governor of Utah; Joseph Califano, secretary of health, education, and welfare; and President Jimmy Carter agreed to investigate the AEC’s activities. A search of AEC files revealed thousands of pages of documents, many of them previously suppressed by the AEC and its successor, the Department of Energy. Cailfano read the relevant documents personally and, after discussing their contents with Matheson, agreed to open them to the public. Over the same period, studies by such scientists as Joseph Lyon at the University of Utah and Harold Kapp of the AEC revealed more of the dangers of exposure to radiation and the extent of the AEC’s villainy.

The Downwinders, as those injured by the tests came to be known, hired a team of attorneys headed by Stewart Udall–a former congressman, descendent of Arizona’s Mormon pioneers, and former secretary of the interior—to sue the AEC. In filing suits under the Federal Tort Claims Act of 1946 (FTCA), Udall’s team bit into a handful of jalapeno peppers—shiny and green on the outside but fiery under the skin. Congress had passed the FTCA to allow people to recover compensation for damages caused by the willful or negligent acts of government employees. On the surface, this seemed fair, but the FTCA exempted “discretionary functions,” by which Congress seems to have meant choices made from among various possible alternatives by federal officials who worked in policy-making positions. In a 1953 decision, the Supreme Court had stripped the skin from the fiery peppers by exempting claims for damages cause by policy decisions made by high officials “even if federal actors have patently abused their discretion.”

The Downwinders ran into other roadblocks as well. Even if they could show that officials at the Nevada Tests Site had acted in ways not contemplated by approved plans, the claimants had to establish that the atomic tests more probably than not had caused their leukemia and cancer. This proved extremely difficult, because people with no apparent exposure to atomic radiation got cancer and leukemia, and cancer often remained latent for long periods before spreading through the body.

The Downwinders filed their case—Allen v. The United States—before federal judge Bruce Jenkins, in Salt Lake City in August 1979. By the time the case came to trial in September 1982, Ronald Reagan sat in the White House, and Henry Gill, attorney for the Department of Energy (DOE), took the lead in presenting the government’s defense. Not surprisingly, Gill and his team based their defense on the plea that the AEC had acted within the scope of its legal discretion under the FTCA. Under this line of argument, they said officials at the Nevada Test Site had no duty to warn the public of the dangers of the atomic tests.

Udall and his team countered by arguing that the actions of the local AEC managers were operational judgments—which in their view would have allowed relief under the FTCA—rather than policy decisions made by AEC higher-ups, exempted by the discretionary rule. In these operational judgments, they argued, the AEC had not taken reasonable care to warn or shield the public from radioactive fallout. The radiation exposure, they argued, was a cause—they did have to prove that it was the sole cause—of the cancer and leukemia. In an argument that essentially nullified the FTCA, Gill and the DOE attorneys glossed over the distinction between operational judgments and policy decisions, arguing that the discretionary rule exempted all actions from tort claims. 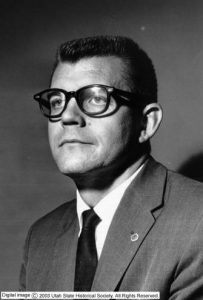 Bruce Jenkins, a U.S. federal court judge, ruled in favor of the Utah/Nevada atomic fallout victims’ (Downwinders’) claim against the U.S. government. His ruling was later overturned by a higher court. He is shown here in 1952.

After hearing the arguments and testimony, Judge Jenkins ruled in favor of the suffering Downwinders in May 1984. In a 489-page opinion, Jenkins emphasized that “a time-honored rule of law . . . imposes a duty on everyone to avoid acts in their nature dangerous to the lives of others.” Jenkins pointed out that at every facility except the Nevada Test Site, the AEC had conducted its operations with admirable caution. Although they knew or suspected the danger from the fallout, they did not tell the people in the path of “the pink-orange clouds of dust, gases and ash” that they stood in risk of cancer or leukemia. Rather, AEC officials publicly lied about the danger, and they carried on a propaganda campaign that downplayed the probability of such deadly diseases. Having decided that officials at the Nevada Test Site had not acted within the range of the discretionary exclusion, Jenkins faced the more difficult problem of judging whether the fallout had caused the plaintiff’s leukemia and cancer. After weighing the evidence, Jenkins ruled that the fallout had probably caused the cancers in ten of the plaintiffs, and he dismissed the claims of fourteen.

After hearing Bruce Jenkins’ opinion, Udall urged the Reagan administration to accept the decision and pay for the negligence of the AEC employees. Instead, Reagan’s attorneys appealed. In a replay of the Bulloch sheep cases, the Tenth Circuit Court became the Downwinders’ graveyard of justice. Overturning Judge Jenkins’ opinion, the circuit court judges ruled that his methods of conducting the tests and the decision not to inform the maimed and dying Downwinders were policy judgments protected by the discretionary rule of the FTCA. In 1988, the Downwinders lost in the court of last resort as the U.S. Supreme Court refused to review the circuit court decision.

In the meantime, Downwinders sickened and died from leukemia and cancer. As a young child, Claudia Boshell Peterson of St. George mourned as her playmates wasted away under the blows of leukemia and melanoma and lost limbs to cancer. As a mother, she agonized as her daughter Bethany succumbed to a tortuous death under the scalpel of neuroblastoma and leukemia. As a sister, she mourned as her sister Cathy, the mother of six, died from melanoma. Served a mess of pottage by the Tenth Circuit Court and the U.S. Supreme Court, the Downwinders turned to Congress for help. Largely because of the work of Utah’s Senator Orrin Hatch and Congressman Wayne Owens, Congress passed and President George Bush approved the Radiation Exposure Compensation Act in 1990 under which the government apologized to the victims for the irresponsible behavior of managers at the Nevada Test Site and established a trust fund to pay for some of the injuries.