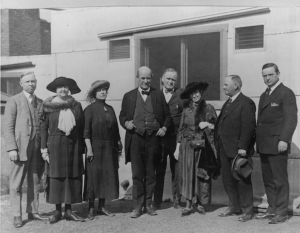 Hello, hello, hello! This is KZN. KZN, the Deseret News, Salt Lake City calling. KZN calling! Greetings!” These were the first words spoken over Utah’s pioneer radio station on May 6, 1922. Though clumsy in his greeting, Nate Fullmer was no doubt too excited to notice what he said. The yearlong effort of creating a radio transmitter was finally over. Fullmer and the others involved could now sit back and enjoy the show.

In 1921 Elias S. Woodruff, general manager of the Deseret News, and Nate Fullmer, business manager, met to discuss the possibility of starting a radio station in Utah. At the time, radio was an exciting new communications medium in the United States. Though major cities such as New York and Chicago already had stations, few people owned radios or knew much about them. Both Woodruff and Fullmer recognized that investing in a radio station was risky business. After all, radio could turn out to be only a passing fad. Nevertheless, they both agreed to take the chance.

Unfortunately, the Deseret News lacked funds to start a station in the conventional manner. Since the American Telephone and Telegraph Company had a monopoly on radio transmitters, the cost of the machinery was enormously high—reaching $25,000. Among others, Heber J. Grant, president of the Mormon church and of the Deseret News, disapproved of the purchase. The only solution was to build the transmitter from scratch. After they chose the station site on the roof of the Deseret News Building and selected an engineer, H. Carter Wilson, the project was underway

The work of building the transmitter and station began in the summer of 1921. Though the men worked long hours, progress was slow and tedious. Wilson was unfamiliar with radio transmitters and had to spend hours studying the mechanics of the machinery and trying techniques that often failed. When his transmitter finally broadcast a scratchy musical piece in April 1922, Nate Fullmer was so excited he ran four blocks to a friend’s electrical shop to find out if the sounds could be heard on radio there. That evening he sent a telegram to Elias Woodruff in the East to tell him that the transmitter was working. On May 6 prominent LDS church and civic leaders were invited to the rooftop of the Deseret News Building to be present at the first official broadcast of KZN.

At 8 P.M. Fullmer opened the program with a brief greeting to the radio world. Heber J. Grant was next on the program. The Mormon president recited a scripture and offered a religious message to listeners. His wife then commented on the momentous occasion, saying: “I think this is one of the most wonderful experiences of our lives. I am glad that I live in an age when every day—almost every hour, brings us some new invention. I would not be surprised if we were talking to the planets before many years.” Mayor Clawson also spoke, congratulating the Deseret News for introducing radio to Utah.

The half-hour program went smoothly enough, except for a moment when President Grant, forgetting that he was on the air, said, “Turn off the heat.” Curious listeners wrote to inquire what the church leader had meant. They were amused to learn that he was simply too hot because an electric heater had been placed on the roof to ward off the evening chill and had done the job rather too well.

With practice and experience KZN programs became more professional than that first broadcast in May 1922. After several months the original evening broadcast time of 8:00-8:30 P.M. was enlarged to include more programs and coverage. Musical programs were broadcasted live from the LDS School of Music. Beginning in July 1923 dance music was aired from the Hotel Utah Roof Garden and the Owen Sweetin Band from the dance pavilion at Saltair. The music was transmitted from a telephone line in the dance hall to the broadcast room of KZN. The Peter Rabbit Club offered songs, stories, and birthday greetings to children. In the early 1930s comedy teams such as Parley Bair and Francis Urmy and The Bates Boys were popular radio entertainers. On July 15, 1929, the first Tabernacle Choir broadcast was heard over NBC. The national coverage quickly increased the reputation and popularity of the choir nationwide.

Though most programs went smoothly, the pioneer station still made embarrassing mistakes. One of most obvious came during the World Series in 1930. The General Conference of the Mormon church was held at the same time as one of the Series games. At 11:30 A.M. Heber J. Grant stood before thousands in the Salt Lake Tabernacle to give his conference address. In the middle of his speech, sounds of the World Series game were heard through the speakers in the building. Apparently, someone at the radio station had hit the wrong switch and reversed the broadcasts. The audience sat in silence for an agonizing eight minutes as they listened to an excited sportscaster describe the action. Meanwhile, Presiding Bishop Sylvester Q. Cannon ran across the street to the KSL studio in the Union Pacific Building to see what had happened. The problem was quickly solved, and everyone, including Heber J. Grant, laughed at the faux pas.

After 1924 the station’s call letters were changed to KSL under the new management of Earl J. Glade. Though the station changed locations and ownership over the years, the name has since remained the same. KSL and other early stations have followed current events in Utah and the nation since the 1920s. The uncertain investment in a Utah radio station in 1921 proved to be well worth the risk.