When the transcontinental railroad came to Utah and again as branch lines spread through the territory, a tremendous need for wood to tie the rails together emerged. Suitable wood was sparse, except in the Wasatch and Uinta mountains. Roads to the timbering areas were difficult to build and dangerous to use. Many accidents occurred when ox or horse wagons lost control on the narrow, steep dugways. Ice and snow slides were sometimes made on mountain slopes in winter to get the logs to where they could be loaded onto sledges or wagons. Some contractors used an easier, but no less exciting method—tie drives down the Bear, Provo, and Weber rivers.

During 1868–69 tie contractors worked crews on the north slope of the Uinta Mountains to supply ties for the Union Pacific in western Wyoming and in Utah’s Echo Canyon. The demand continued into the 1880s when the Union Pacific, Utah Northern, Oregon Shortline, and other branch railroads spread over northern Utah. Various small outfits cut trees, dragged them to the river bank, hacked them into tie length and shape, branded them with their own special hack marks, and stacked them. Then, during spring runoff, the ties were floated down the Bear River as near as possible to the construction site or a rail line. The ties were pulled from the river and transported to the crews laying track. Ties could be floated over 100 miles down river, with tie drives lasting from a few weeks to two months, depending on how long high water lasted. Occasionally the river banks had to be built up to keep the ties from going into the meadows where they could be stranded, or the river bed might have to be grubbed out to prevent the ties from hanging up en route.

This same process was carried on later on the south slope of the Uintas using the Provo River and to a lesser extent the Weber River to transport the ties. The headwaters of the Provo were especially good for logging. Samuel Stephen Jones of Provo had contracts with the Denver & Rio Grande Western Railroad to supply ties for the line from Provo to Price and delivered 140,000 ties in one season. Jones supplied ties through the 1880s and 1890s. He would send men to the headwaters of the Provo River in the Uinta Mountains to cut, haul, and stack the ties on the banks of the river and its tributaries. The camps would be supplied from S. S. Jones’s store. In the spring tie drivers would be sent to throw the ties into the rising river. Men went in advance to “wing” off the side steams so that the ties would stay in the main channel. As the ties floated downstream, other men followed to bring up the camp and free ties caught on the river banks. The drivers used light poles with sharp iron spikes and hooks to loosen ties that jammed up. Sometimes the jams would be so tightly wedged together and so extensive that a man could walk on them for as much as a mile. The drivers wore hip boots, and often worked in the water up to their waists and even armpits to dislodge the log jams. It was hazardous and exciting work. The long drive was made down to the mouth of Provo Canyon where great care had to be taken by the drivers to keep the ties from going into irrigation canals. A curb dam near the city would hold back the logs as they were snared from the river and hauled to the depot in Provo for transporting by rail to the construction site.

Henry Goddard remembered logging on the Weber and Provo rivers. In about 1882 he worked at the head of Weber River for the Johnson and Liddiard Company who supplied ties for the Union Pacific. The ties were run down the Weber River to Wanship for the line from Coalville to Park City. He also recalled other drives. In 1884 the Jones and Williams outfits were driving ties down Provo River to be used by the Utah Southern Railroad, standard gauge, and the D&RGW, narrow gauge. The largest drive was in 1886 or 1887, with 350,000 ties from various companies going downstream. Although each company used different hack marks on their ties, many became mixed, causing some disputes. Goddard described how the logs would be held behind a dam at the junction of the north and south forks of the Provo until ties from various tributaries had made their way down. Then all the ties would start down the main river. At times ties would be backed up all the way from the railroad bridge in west Provo to Hailstone Ranch near the present Jordanelle Dam. The 15 to 18 days of the tie drive coincided with high water. Sometimes all the ties did not make it down before run-off ceased, leaving some ties stranded near Midway and Heber. Contractors would have to wait until after irrigation season to get the rest of their ties down the river. 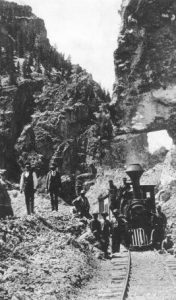 A most unusual tie rafting occurred near Tooele during the construction of the Utah Central Railroad from Ogden to Salt Lake City, according to Alexander Bevan, a member of the crew. Thomas Lee and William Jennings contracted to supply several thousand ties from Dry and Pine canyons on the east side of Tooele Valley. During the winter of 1868–69 the ties were cut and hauled down the mountain to the Great Salt Lake, 12 miles from the canyon. A corral, called a boom, was made at the edge of the lake and the ties thrown in. Some of the ties were double-length. By pinning the double-length ones together the crew made several “cribs,” that were chained together to make a long raft. The 8-foot single-length ties were piled four feet high onto the cribs. A runway was left on each side of the raft for the men to walk along as they poled the raft across the lake. Eighteen to 20 men worked aboard the raft, pushing with the poles to propel the craft. For three days and nights the men lived on the raft as they took the ties 30 miles from the loading area to Farmington. They drove the raft close to shore at Farmington, maneuvered the end sections to reshape a corral, unloaded the ties into the water and worked them to the beach. There they were pulled out by horses, loaded onto wagons, and hauled to the grade three-quarters of a mile away. Cutting and driving ties were occupations for the hardy. It was adventurous and hard work that provided employment for Utah men during the heyday of railroad construction.