Commonly referred to as “the oldest profession,” prostitution holds a long and intriguing position in Utah history. The general feeling at the beginning of the 20th Century considered it as a “necessary” evil that could never be eliminated, but merely controlled. Laws existed mostly to satisfy middle-class morality, but normally, it was confined to a specific part of town called a “red-light” district where it could be observed and controlled.

Clearly, by the 1870s, Commercial Street, (today’s Regent Street between Main and State Streets and 100 and 200 South) in downtown Salt Lake City was the center of the red-light district. Parlor houses along the street housed legitimate businesses; usually liquor or tobacco stores, and held “female boarders” in the upper parts of the houses. Miss Helen Blazes and Miss Ada Wilson were each madams of these types of establishments. Police regularly conducted raids of the establishments, fining, arresting, and even sometimes conducting physical examinations of the women.  By 1908 a formal registration system existed where police kept track of the names and addresses of madams and their houses and in turn, the madams supplied current lists of their girls. Each month, the girls paid a ten-dollar fine which supplied much of the city’s revenues.

Starting in 1903, calls to purge Commercial Street of its sordid establishments began, citing that it soiled the main business district and decreased property value. Salt Lake City mayor John Bransford along withthe city council adopted a “stockade” policy in 1908, planning to build a sort of compound where the denizens could practice their inevitable trade freely, but discretely. Bransford said, “I propose to take these women from the business section of the city and put them in a district which will be one of the best, if not the very best, regulated districts in the country.” 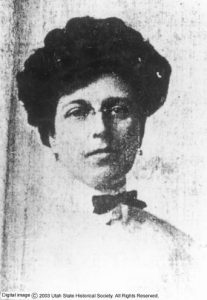 Dora B. Topham “Belle London” Madame of the Stockade

These men asked Mrs. Dora B. Topham, Utah’s notorious “Belle London” of Ogden’s “Electric Alley,” to form a corporation, buy a block of land on Salt Lake’s westside and establish a stockade. During the summer of 1908, she created the Citizen’s Investment Company and purchased land where it would have, “as little negative effect as possible.” They chose the area between 500 and 600 West and 100 and 200 South because the were railroads on three sides of it, it divided two school districts (so children wouldn’t have to walk past it), and because, “the ‘foreign element,’ (Greek and Italian workers) had so destroyed the area that establishing prostitution there would not harm it any further and could even be rationalized as catering to the immoral foreigners.'”

The community reacted in many different ways. The West Side Citizen’s League was formed to abolish it, but many also found it a very practical way to deal with prostitution. Soon after completion, on the evening of December 18 city police told prostitutes that they had until 4:00 a.m. the next morning to vacate the area. They basically were given three choices: leave town, go to jail, or reside in the stockade. 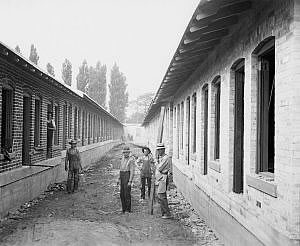 square with a door and window, and built in rows. A curtain divided the crib in two, with a washstand and chair in the front part and a white enameled bed in the back with the girls paying one to four dollars a day for their “residence.” Within the stockade there were also larger parlor houses and storehouses for liquor–an essential component of the stockade operation. The stockade had three entrances, each guarded to both keep children and “undesirable” guests from entering as well as to warn of the periodic police raids. The installation of an elaborate alarm system proved to be very effective for whenever the police ventured out, they found the stockade dark and deserted.

The stockade operated for three years until on September 28, 1911, Belle London unexpectedly announced, “The stockade will be closed on Thursday and the same will not be reopened again.” Although many theories exist, it is still questioned what her exact motivation for the closure was. Again some people expressed great relief while others felt very upset to “have the streets flooded with the scarlet ladies.” Some of the former occupants accepted the offer of the Women’s League, going to the Women’s Rescue Station and leaving their lives of sin. While, others returned to Commercial Street which continued to be a red-light district until the 1930s, or remained near West 200 South, an area for prostitution until the 1970s.