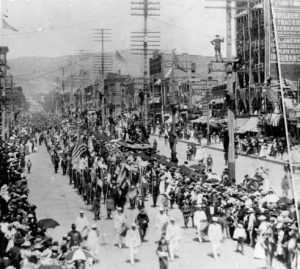 On July 29, 1898, Captain Richard W. Young moved a platoon from Battery A, Utah Light Artillery, into place around the Philippine capital city of Manila. Two days later Captain Young’s artillery and men proved of great service in the bombardment of Manila and the eventual capture of that city during the Spanish-American War. Young was a native of Utah and graduate of West Point whose life, in and out of the military, was marked with distinction.

Richard W. Young was a grandson of Brigham Young, fought in the Phillipines in the Spanish-American War, and worked as an attorney in Salt Lake City.

He was born in the historic Beehive House in Salt Lake City on April 19, 1858, a son of Joseph and Margaret Young and a grandson of Brigham Young. At the age of thirteen Richard began working in the freight office of the Utah Central Railroad and later attended Deseret University for two years. He taught in the district school at Richfield for a brief period before being appointed as a cadet to the U. S. Military Academy at West Point in 1875. The death of his father prevented his leaving home, and instead he returned to work for the railroad. In 1878 the cadetship was again offered to him and this time he took it. He graduated fifteenth in his class and shortly thereafter married Minerva Richards with whom he parented eight children.

In 1884 Young enhanced his military standing when he graduated from Columbia Law School. He was one of the first army officers to take a college law course, and he soon gained prominence as an army lawyer. Nevertheless, in 1888 Young resigned from the military to begin his own law practice in Salt Lake City. He quickly became attorney for several prominent Utah businesses, including the State Bank of Utah and the Utah Sugar Company. Yet, at the outbreak of war with Spain in 1898 Young felt duty bound to assist his country and volunteered for service. In addition to the capture of Manila, Young took part in nearly twenty-five other engagements in the war and the Filipino Insurrection. Following the end of hostilities he was appointed associate justice and president of the criminal branch of the Supreme Court of the Philippine Islands where he served from 1899 to 1901. In that capacity he helped prepare the Philippines’ code of government and criminal procedure.

Upon his return to Utah, Young rebuilt his lucrative law practice, but war once again interrupted his life. In 1918 he was promoted to Brigadier General and placed in command of the 65th Brigade, 40th Division, American Expeditionary Forces in France during World War I. His military service was brief, and in 1919 he was again practicing law in Salt Lake City. Then, in December of that year, he suffered an appendicitis attack that ultimately brought his influential and prominent life to an end two days after Christmas.