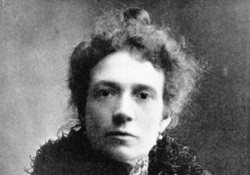 In Utah’s history there have been many important women of whom little has been written; one such person is Ruth May Fox. Besides raising 12 children, she was active in the Utah Woman’s Press Club (president), the Reaper’s Club, the Utah Woman Suffrage Association (treasurer), the Salt Lake County Republican Committee, the Second Precinct Ladies’ Republican Club (chair), the Deseret Agricultural and Manufacturing Society (board member), and the Traveler’s Aid Society (board member). She also served on the general board and as general president of the Young Ladies’ Mutual Improvement Association (YLMIA).

She was born November 16, 1853, in Westbury, Wiltshire, England, the daughter of Mary Ann Harding and James May. After her mother died in childbirth in March 1855, Ruth lived with various Mormon families and relatives. In 1865 James May journeyed to America and soon sent for Ruth and a Mrs. Saxon, whom he married, and her daughter, Clara. The two girls worked in factories in the Philadelphia area and did housework to help earn money for the family’s journey to Utah. They arrived in the Salt Lake Valley in 1867.

James May, Ruth, and Clara all worked in the Deseret Woolen Mill at the mouth of Parley’s Canyon for two years. Later, Ruth and her father worked at the Ogden Woolen Mill near the mouth of Ogden Canyon. Ruth returned to Salt Lake to attend John Morgan’s College for four months, ending her formal education. When her father bought some used equipment and started his own business in Salt Lake, it was back to the mill for Ruth. She operated equipment meant to be run by a man and developed strong feelings about equality—especially equal pay. Running the jack was a man’s job, she later wrote, noting, “I should have had a man’s wages for this, but Father thought that his partner would object since I was a girl….I was given only $10.00 a week; but that was very good for a girl at the time.” At age 19 she quit to marry 20-year-old Jesse W. Fox, Jr., on May 8, 1873.

The couple prospered financially and had planned on building a three-story mansion when in 1888 Jesse married a plural wife without Ruth’s knowledge. About this time financial disaster hit the Foxes. Jesse lost his business and accumulated large debts, and they eventually lost their home. Ruth responded by doing what needed to be done; she let domestic help go and eventually took in boarders. In 1914 Ruth moved in with her son Feramorz Y. Fox to be near her ailing father and to work as a typist for the YLMIA.

Always interested in writing, she joined the Utah Woman’s Press Club and the Reaper’s Club, groups that emphasized literary pursuits. She thus became acquainted with the leading women of the day, including Drs. Ellis R. Shipp and Ellen B. Ferguson, Emma McVicker, and  the person most influential in her later life, Emmeline B. Wells. Ruth was not especially interested in politics per se, but she became active in the suffrage movement and in the Republican party to further the suffrage cause. She actively worked for the inclusion of woman suffrage in the Utah Constitution during the 1895 Constitutional Convention and helped to draft the suffrage memorial presented to the convention delegates. Later, she worked for the election of candidates who would support women’s issues and for the approval of the new Constitution. Her diary, now housed in the LDS Church Archives, details her activities during the crucial year of 1895. On February 22, for example, she attended a suffrage meeting where it was decided that the women should interview the Constitutional Convention delegates. She and “Sister Ebba Hyde… were appointed to see Samuel Hill, Richard Lambert and Mr Vanhorne.” Two days later she interviewed Hill, who responded favorably to woman suffrage, and Vanhorne, who “did not think the constitution was the place for sufferage [sic] to come up.” On March 18, when the women presented their suffrage memorial to the convention she wrote: “We all felt it a great day in the history of Utah.” Later they learned that the committee on suffrage had passed it on to the convention as a whole by a 10 to 5 vote in favor.

Ruth attended the debate over suffrage on March 28 and heard B. H. Roberts’s eloquent oratory against including suffrage in the Constitution. Ruth wrote: “…his only argument was that he thought it would defer statehood.” As debate continued over the next few days Ruth wore herself out on April 1 when she spent the entire day at the convention, standing up almost all of the time. She thought it a shame that Roberts did not use his eloquence “in a better cause.” She helped to circulate petitions calling for the inclusion of woman suffrage in the Constitution, keeping up the fight until the goal was reached.

When Susan B. Anthony and the Reverend Anna Howard Shaw arrived in Salt Lake on May 12, Ruth was among those at the depot meeting the train. About 40 women breakfasted with the national suffrage leaders and enjoyed other activities during their stay. Then on May 19 Ruth attended a reception for the Constitutional Convention delegates at the Templeton Hotel where again she enjoyed herself and perhaps felt gratified that her hard work had helped the suffrage cause. During the next months she was active in the Republican party and traveled to various towns with Emmeline Wells to attend Republican meetings. On November 5, election day, she said she believed that “we have got Statehood assured so far as the vote is concerned and that means sufferage [sic] for women.” She had given the cause her all and was probably feeling a tremendous letdown when she also confessed that she did “not much care” how the vote turned out.

Ruth May Fox died on April 12, 1958, at age 104, an achievement that seemed the most significant thing about her to the newspapers of the day. The contributions she had made to woman suffrage were mostly forgotten.