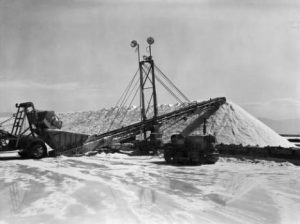 Sodium chloride, or common salt, is one of the most useful and sought-after substances on earth. It has long been used to flavor otherwise bland foods and to preserve perishables in the absence of refrigeration. The various inhabitants of Utah over the millennia have recognized the value of the Great Salt Lake and its surrounding salt flats. The lake is, of course, the remnant of a much larger ancient inland sea that scientists have dubbed Lake Bonneville. As the lake shrank over time, the concentration of minerals in its waters, including salt, increased, while the resulting dried-up areas became coated with salt to a depth of several feet.

Father Escalante’s 1776 journal noted that local Indians used the surrounding salt deposits for their needs. Mountain man Jedediah S. Smith obtained salt near the lake and took some to William Henry Ashley’s fur party in 1825. John C. Fremont and Kit Carson mentioned the easy availability of the mineral along the lake shore, but since most immigrant parties already carried sufficient salt, the lake shore did not attract many overland travelers in need of the mineral.

The first Mormon settlers visited the lake on July 28, 1847. Brigham Young and others gathered salt from the surrounding rocks and noted how easy it was to simply scoop up the product; this method would be used by some well into the 20th century, although salt gathered that way contained impurities. In August 1847 a committee was assigned to get salt for the new settlement; they returned four days later with 125 bushels of coarse salt that they had shoveled out of deposits, along with some fine white table salt obtained by boiling. Historian John Clark said that the Mormons considered the salt deposits to be a communal resource, much like water or timber.

A crude, temporary saltworks, including apparatus for boiling down lake water, had been built by 1848. In 1849 the LDS Quorum of the Twelve directed a company of men to establish a permanent saltworks. By 1850 Charley White and his family were operating the saltworks on the lake shore opposite Black Rock and producing fine, coarse, and common grades of salt. White advertised that he would accept “cattle, grain, flour, hams, bacon, cheese, butter, pigs, sheep, lumber, poles, or firewood” in exchange for salt. The demise of the White saltworks is shrouded in mystery; a persistent local legend maintains that the Whites separated and that Mrs. White continued to run the works until she was murdered by unknown persons who wanted her cattle.

Salt even entered into the Utah War of 1857–58. Washington authorities had reasoned that Johnston’s Army was going to Salt Lake City and therefore did not need to be supplied with a commodity that was relatively costly in the East. Government bungling and indecision, however, meant that the Army was forced to winter at Camp Scott near Fort Bridger, well short of its Salt Lake Valley destination. There the federal troopers spent a miserable winter, complaining about the insipid food. Besides salt, tobacco, sugar, and coffee were scarce and expensive; whiskey cost $12 a gallon when it was available. Brigham Young, hearing of Johnston’s troubles, sent several mule loads of supplies to the general, along with a note urging him to accept the gift (and leave). The proud Johnston contemptuously refused the gift, although apparently his men accepted it gladly. Wilford Woodruff reported that an Indian named Ben Simons earned over $2,000 selling salt to the Army.

The laborious boiling method of obtaining salt declined in use in the 1870s, to be replaced by specially constructed solar evaporation ponds. Initially, saltmakers relied on the wind to fill their ponds; when this proved unreliable they installed pumps. The resulting product tended to be bitter and damp, until by trial and error the saltmakers established the fractional crystallization process, which used a series of ponds to create a nearly 100 percent pure product.

The demand for Utah salt greatly increased when the Butte, Montana, silver mines opened, since salt was used in the reduction of ore. Until railroad lines were constructed, the salt was carried by mule load to the mines at the rate of $200 a ton. Eventually, the Utah Central, Utah Southern, Utah Eastern, and Utah Western railroads connected the saltworks with mining customers at Butte, Juab County’s Tintic District, Park City, and elsewhere.

The final two decades of the 19th century saw the salt industry go from a highly decentralized, competitive business to a near monopoly. Eventually, the Inland Salt Company and its corporate successors dominated the industry, producing coarse salt for industrial use as well as refined table salt. In 1990 salt production in Utah totaled almost 1.8 million short tons with a value of $50.4 million—considerably less than the $200/ton rate paid by the Butte mine owners more than a century ago.