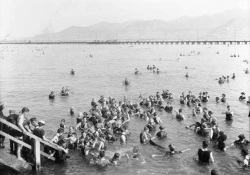 The Great Salt Lake has been a popular recreation site since the earliest days of white settlement, and a number of resorts have been built on its shores since the first two were constructed in 1870. The most popular and the best-remembered resort was the early Saltair. An important cultural symbol, it is deeply imbedded in Utah’s history and has long interested artists, essayists, folklorists, and historians.

In 1893 the Mormon church built Saltair on the south shore of the Great Salt Lake, about sixteen miles from downtown Salt Lake City. They also built the railroad connecting the resort with the city. The church owned the resort until 1906, at which time it was sold to a group of private Mormon businessmen. The architect of Saltair was Richard K. A. Kletting, perhaps Utah’s foremost architect at the turn of the century and the designer of the Utah State Capitol building.

In building Saltair the Mormon church had two major objectives: in the words of Mormon apostle Abraham H. Cannon, they wanted to provide “a wholesome place of recreation” under church control for Mormons and their families; and they also intended that Saltair be a “Coney Island of the West” to help demonstrate that Utah was not a strange place of alien people and customs. This was part of a larger movement toward accommodation with American society that had begun in the early 1890s as church leaders made a conscious decision to bring the church into the mainstream of American life. Saltair was to be both a typical American amusement park and a place that provided a safe environment for Mormon patrons. Those goals were somewhat incompatible, and in less than a decade the second had clearly triumphed at the expense of the first. Nonetheless, initially Saltair signified the Mormon church’s intention to join the world while at the same time trying to minimize its influence and avoid its excesses.

Saltair opened on Memorial Day 1893, and was officially dedicated on 8 June. Its main attractions were always swimming in the Great Salt Lake, where people could bob around like corks, thanks to its 25 percent salt content, and dancing on what was advertised as the world’s largest dance floor; but the resort always had a wide range of other attractions. They included a roller coaster, a merry-go-round, a ferris wheel, midway games, bicycle races, touring vaudeville companies, rodeos, bullfights, boat rides on the lake, fireworks displays, and hot-air balloons.

Saltair reached the peak of its popularity in the early 1920s when it was attracting nearly a half-million people a year. However, in April 1925 it burned to the ground. Raymond J. Ashton and Raymond L. Evans designed a new pavilion along the general lines of the original one, and it was built the next year, but the resort never regained its former popularity. During the 1930s it had to battle the effects of the Great Depression; high maintenance costs as winds and salt spray ate away at wood and paint; a $100,000 fire in 1931; and receding lake levels, which in 1933 left it a half mile from the water. Saltair closed down during World War II. It reopened with high hopes after the war but continued to struggle, and it closed for good after the 1958 season. During the 1960s efforts to save it failed, and it stood forlorn and abandoned until fire destroyed it in November 1970.

In 1981 a new pavilion was built near the site of the original. It opened in July 1982, but struggled to survive as the lake first reached its highest level in history by 1984, putting the pavilion’s main floor under five feet of water. In the late 1980s the water began to recede.

In the fall of 1992, the Great Salt Lake Land Company, headed by Salt Lake attorney and real estate developer Walter Plumb, bought the resort. Over the next six months the new owners restored the structure and added a concert stage where they intended to present local and national artists. It opened on 8 June 1993—Saltair’s one hundredth anniversary.