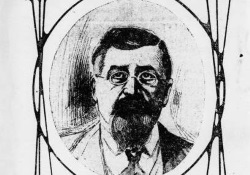 Samuel H. Gilson is a colorful and versatile figure in Utah history. Gilson served as a Federal Marshal, prospected for gold, raised livestock, invented machinery, and defended the rights of organized labor. His name has become most closely associated, however, with a useful industrial hydrocarbon.

Gilson was born in Plainfield, Illinois in 1836, and came west with his brother James to search for gold in 1850. Apparently his fortune eluded him, because by the 1860s, Gilson was raising livestock in Nevada and supplying horses for the Pony Express. In 1870, the Gilson brothers moved to the Sevier River valley, where they established the Mountain Ranch. Sam Gilson also served as a U.S. marshal and presided at the execution of John Doyle Lee at Mountain Meadows. In 1884, Gilson was the hired by U.S. Attorney W. H. Dickson as part of a detective force to enforce the Edmunds anti-polygamy act; Gilson quickly obtained enough evidence to indict ten prominent Mormon leaders.

In the course of his livestock dealings, Gilson came across a shiny black coal-like substance in the Uintah basin. The material was not unknown; some samples had been sent to the Columbia College School of Mines in 1865, and explorers and prospectors apparently knew of its existence. In 1869, the blacksmith at the Whiterocks Indian Agency, John Kelly, asked the Utes to bring him some coal; the stuff they returned with burned so smoky and hot that it nearly burned Kelly’s shop down. Gilson either discovered an outcropping in Horse Canyon in 1885, or more likely, was shown the material by local cattlemen.

Gilson might not have discovered it, but he worked hard to discover commercial uses for the material. Investigation by the Smithsonian Institute revealed it to be 99.6% pure hydrocarbon. Gilson experimented widely with the substance, as his widow remembered decades later: “It is such a sticky, messy, mineral asphaltum when it’s heated and you should have seen my kitchen! There was gilsonite in every pot, pan and kettle I owned.  Everywhere I turned I ran into the stuff.” In 1889, a St. Louis firm bought out Gilson’s interest. Gilson jokingly offered one silver dollar for the firm to name the company after him, and they did—The Gilson Asphaltum Company, for years the leading producer of “gilsonite,” as it came to be almost universally known. The material eventually came to be used for a vast array of industrial uses, including as a base for paint, electrical insulators, signal flares, building paper, roofing material, floor tiles, and printer’s ink.

The imaginative Gilson continued to experiment in a number of other fields, including the design of an efficient coke oven. His widow claimed that he invented a widely-used platform for railway coaches and designed a workable airplane, neither of which he profited from. Gilson continued prospecting, and took an interest in the problems of labor. In 1904, he protested the treatment of striking Carbon County miners, even getting himself arrested for supposedly cursing Sheriff Hyrum Wilcox and his deputy. Gilson lived his last years in Salt Lake City and died on December 2, 1913.