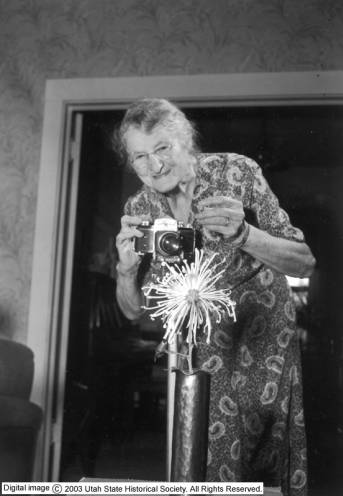 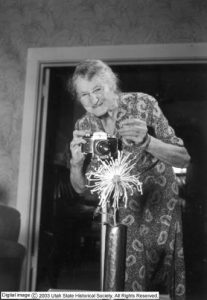 This distinguished teacher and photographer had a zest for living.

At age 10 Mattie Clark wanted to leave school to become a photographer. Instead she remained in school much of her life as both a student, receiving a master’s degree in zoology at age 59, and as a teacher for 45 years, retiring in 1944.

In about 1910 Mattie Clark Sanford bought her first camera, mostly to record family activities, but her childhood fascination with the medium returned and blossomed into an avocation that would bring her local, national, and even international recognition.

In 1935 she began shooting color film and used her photographs to illustrate nature study classes in the public schools. When stereo cameras became available she bought one and became an expert in the field of three-dimensional photography. The Photographic Society of America (PSA) named her the top woman in the world in stereo photography in 1960. At its international convention in Montreal, Canada, in 1964 the PSA named her a Fellow in honor of “her excellence in color and stereo photography and for her many contributions to the advancement of amateur photography by teaching, lecturing, and organizational work for more than 25 years.”

Sanford gave some practical advice to aspiring photographers in 1964: “Put your camera on a tripod, compose the picture just right, then keep shooting until you get it just the way you want it. It may take a lot of film—but it’s worth it! ”

Besides her active participation as an organizer and officer in many photography organizations, Sanford also served as president of the Salt Lake City and the Utah Retired Teachers associations and lobbied with the legislature for improved benefits for retired teachers. In 1963 the Salt Lake Council of Women inducted her into its Hall of Fame. For her work with youth she received a citation from the La Seratoma Club of Salt Lake City in 1967.

But according to a Deseret News editorial following her death on June 10, 1968, the way Mattie Clark Sanford lived her life—with zest—was as important as her many accomplishments as a teacher, photographer, and citizen. At the age of 80 she climbed to the top of the Tetons and “prowled around Utah’s deserts and mountains in an incessant search for the perfect picture.” She was, the News editorial concluded, “one of those wonderful, one-of-a-kind people who make every life she touches more exciting and challenging. Few of us will leave a more beautiful and lasting legacy than her file of photographs.”